It was Christmas Eve… 6:00 am… The text comes in, “Sorry man. Woke up with a sore throat. Santa can’t be sick today. Gonna pass.” So, dawn patrol busted or change of plans? I opted to wait 30 minutes for additional morning light before driving the whole 10 minutes to the trailhead. It would now be a solo trip with the intent of getting some exercise and skinning into the skiable terrain to check out the snow conditions and the snowpack.

Arriving at Tibble Fork Reservoir, I was surprised to be the third car there (99% of the time, nobody else is there any earlier than 8am) with a single dude sitting on his tailgate fiddling with his cross-country setup–ready to head out.

“Good morning,” I said to no response. “Hmm, I thought… that’s odd. Most folks are typically a bit more friendly at the trailhead, maybe he’s iPodded out?” I waited another couple minutes after getting my Dynafit Titan’s on. “Nice morning eh?” I said it a bit louder this time. To that, I get a mumbled and grumpy response about it being cold. I then said, “Well, at least it’s not single-digits. That’s the typical temperature at this hour.” All I got back was, “Just barely… it’s 11-degrees.” 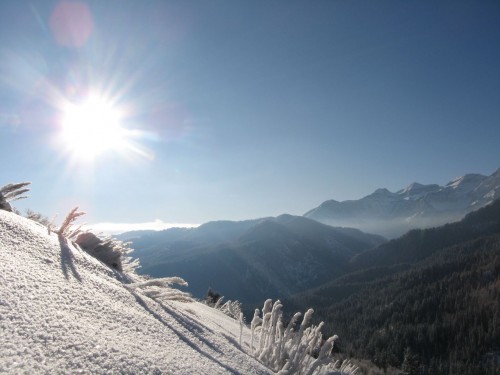 It ended up being a system check as I tested out all my new gear for the year and worked out some of the kinks. My boots for this year are the new Dynafit Titan’s and I also had the Osprey Kode 30 backpack. In tow was the new Smith Maze lightweight ski helmet and the Scott Fix goggles.

Once I got to the skiable terrain, it was apparent that the snowpack in this part of the canyon consisted of a consolidated 2-foot(ish) base with about 6-inches of ultralight fluff on top. I proceeded to break trail and ski a short 300-ft shot to christen the season. Here’s to a great season of ski touring in American Fork Canyon. 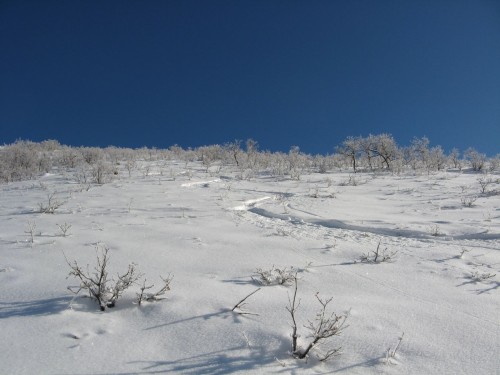