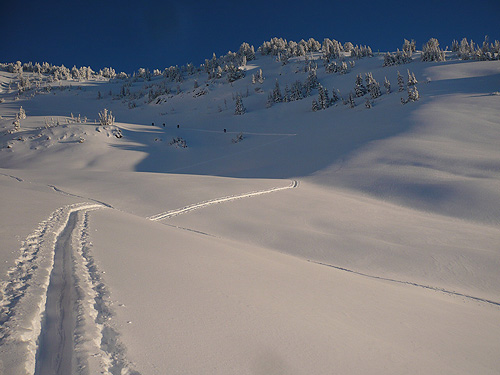 After a few weeks of limited skiing and more meetings than a skier should be subject to, I put the laptop down, stepped away from the office and got down to business. While Rich and crew ascended Mount Superior via the direct route that is the South Ridge, our approach was a little more convoluted.

We started skinning just after 7am and headed up Toledo Bowl, across the street from Alta. As we crested the first little rise to put us above the Little Cottonwood highway, the alpenglow sunrise on Mount Superior was as impressive as I ever recall. But the -5 degrees had me with my hands in pockets skinning along (sorry, no photo). Someone commented that we should go ski it and so it was, our final destination was set.

We kept on up Toledo Bowl as the sun began to rise higher, finally giving us some added warmth but also providing added motivation to get down to business. Upon reaching the top with bluebird skies, views for hundreds of miles and over 2′ of snow in the previous 48 hours, we knew it would be money.

Upon arriving at the top of Toledo Bowl and looking down into Holy Toledo I knew it would be good. Thing was, my buddies are in much better shape than I so theirs were the first tracks to be had. With bluebird skies and views for hundreds of miles, I took in th view, (with my new Kaenon Kore sunglasses that I’m loving! while my buddies were dropping in, the first of 5 runs we’d take. Playing catch up is also the reason why none of my images are of the action. 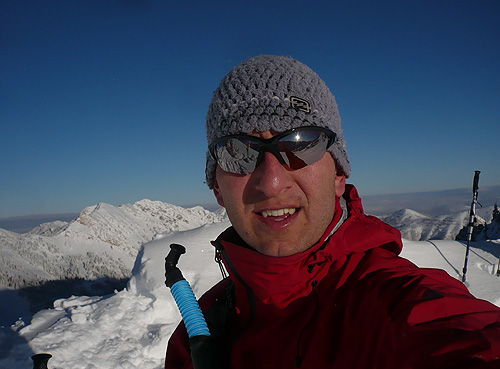 While skinning up the middle ridge in Cardiff, the winds were starting to pick up on the upper reaches. We knew that we’d need to get going before the forecasted winds wrecked the powder. The views were once again stunning. 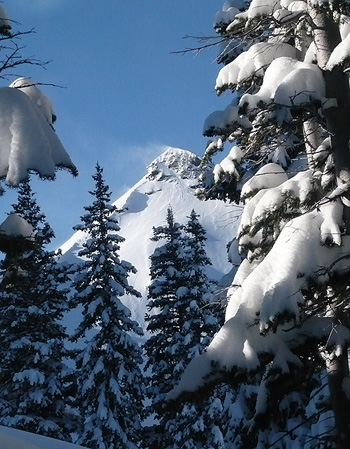 After a quick run through the trees with ultra cold smoke snow, we were staring up at Cardiac Ridge, Cardiac Bowl and the backside of Mount Superior.  Like any self respecting backcountry skier, with not a track to be seen, we did headed up for a lap.  Below is the lower section with the ridge in the distance showing the equivalent of the elevation we’d skied from. 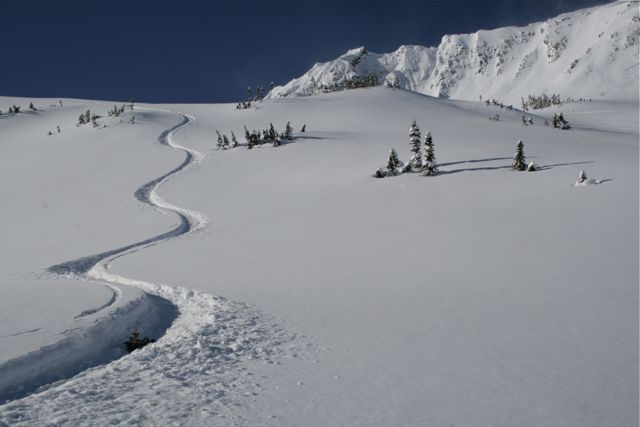 After coming back up to the top of Superior we looked over the ridge to see that about 30 of our closest friends had already visited the South Face of Superior. While the upper was rocky and resembled Silver Fox more than Superior, the middle apron and lower were money! Nothing like 2′ of cold smoke for 2000′.

I was rocking the Old School Bluehouse Districts, happily.  They were built for powder and powder is what they got.