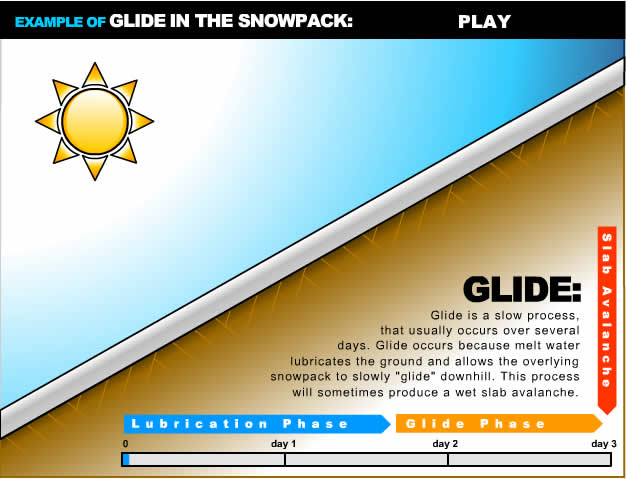 Glide Avalanches in March… Who Knew?

I just read the avalanche report from the Utah Avalanche Center… not a whole lot to report on other than turning conditions being about as bad as they can get right now. With a long time since that last real snowfall and extremely warm temperatures, I’ve been doing more trail running with dreams of dry, buffed-out singletrack–it’s just not right for early March.

While the trails are starting dry out, the snowpack is consolidating in a hurry. Well, I say consolidating, but the reality is it’s melting really fast. With freezing levels at 9500 ft., only the highest peaks are freezing overnight. Morning temperatures at our house (5200 ft.) have been 50+ degrees each morning this week… ugghhh! Without a solid freeze/thaw cycle, the snowpack is a mucky mess instead of the bountiful corn harvest we should have.

While there’s no doubt that winter will return and dump more fluffy Utah powder, this warmth is putting the hurt on the snowpack.  This brings me to the topic of the day: Glide Avalanches. 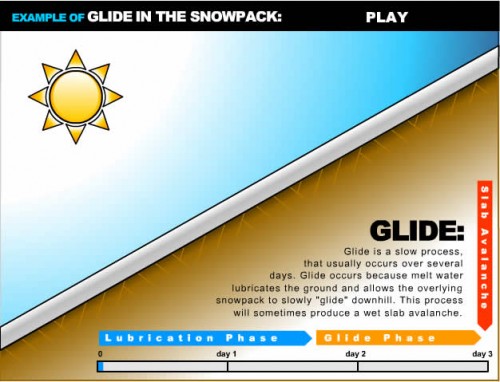 What is a Glide Avalanche? Well… I’m glad you should ask.  Honestly, I didn’t know that’s what this type of avalanche was called until I read Tuesday’s avalanche report.  This occurs when the snowpack gets completely saturated to the ground and meltwater lubricates the underlying earth. Here’s the word from Avalanche.org:

Glide occurs when the entire snowpack slowly slides as a unit on the ground, similar to a glacier. Don’t mistake glide for the catastrophic release of a slab avalanche that breaks to the ground. Glide is a slow process, that usually occurs over several days. Glide occurs because melt water lubricates the ground and allows the overlying snowpack to slowly “glide” downhill. Usually, they don’t ever produce an avalanche but occasionally they release catastrophically as a glide avalanche.

So there you go… I’ve seen these slides in Spring when entire slabs of snow just let loose all the way to the ground, but I didn’t know they had an official name.