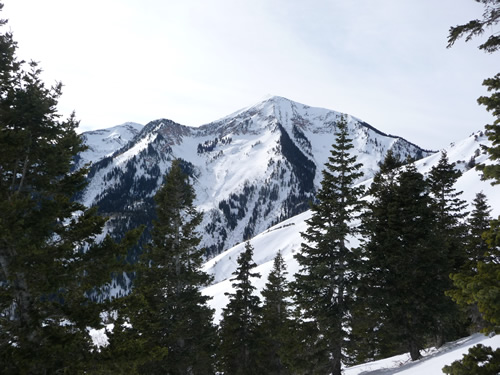 The Wasatch Front Range experiences the inevitable inversion at least once during every winter.  For some reason, it seems to show up mid-January right when we should be getting pounded with snow–go figure.  The high pressure builds and the cold air gets trapped in the valleys along with high volumes of smog.

When this happens, the best thing to do is head to the mountains where the skies are blue and the air is clear and clean.  Temperatures at upper elevations tend to rise well above freezing, thus changing the mid-winter snowpack into something that more resembles springtime conditions. Because of this, Dawn Patrols are pointless–unless you want “first ice.”  So, we got a little later start (10:30 am) in hopes that we’d be harvesting corn instead of variable crust. 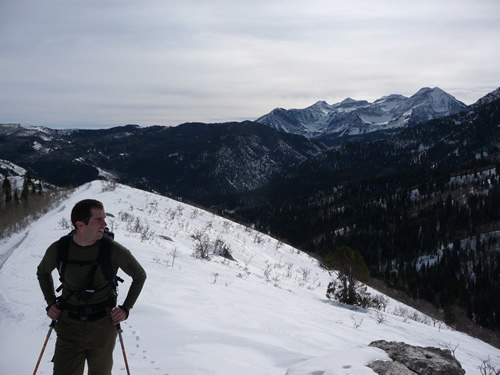 Starting at Tibble Fork, we got geared up just as the hordes of snowmobiles and an angry pack of SnoXcycles were revving their engines on their way up the mountain. As we slipped out and made our way towards the tranquility of Granite Flats Campground, we got sprayed by the flying snow coming off the tracks of the throttle-happy SnoXcycles. And then, like a pack of snowboarders, they had to all stop in the middle of the road right in front of us–taking up the entire width of the road.  I guess they think they are the only ones who deserve to use the road.

We skinned around them and slipped into Granite Flats Campground and the safety of the Wilderness Area–no snowmobiles! And people wonder why snowmobiles and motorcycle riders get a bad rap… it doesn’t take much to find the bad examples.

Anyway, moving onto the best part of the day. As we skinned through Granite Flats, the conversation was on where we would ski that day. We were pretty confident that turning conditions would suck, so we were essentially going to be satisfied with the exercise, but as we skinned up the west ridge of Silver Lake Flat, I started to think we’d actually get some decent corn. The surface where we were skinning was the beginnings of perfect corn so we carried on with the hope we’d find more to harvest.

Once we attained the ridgeline, the goal was to skin up the nose of a ridge to the Northwest of Silver Lake Flat–another 1300 vertical feet–onto the lower flanks of White Baldy.  The entire southern flank of White Baldy is enormous, relatively wide-open and mostly south-facing, which reduces major avalanche concerns at this point.  You’ve got to worry about wet slabs much later in the day, but the south-facing snowpack is entirely consolidated.

On the way up, we came upon a moose hotel where it looks like several moose had been staying, eating, sleeping, pooping and leaving antlers. We found two good-sized moose racks, but they were surprisingly heavy and wouldn’t reasonably fit on the back of our packs.

The views from this ridge were awesome… Timpanogos to the South, Box Elder to the West and all the usual suspects that flank Little Cottonwood Canyon were in full view. I just love being in the Wasatch! 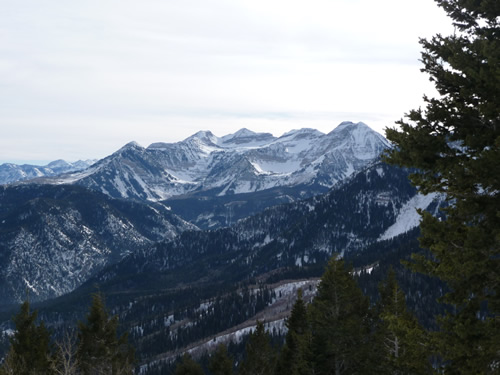 Once at the saddle, among large pine trees, we were greeted with perfectly-pitched slopes and widely spaced trees. I was pretty stoked as anything sun-baked had turned into perfect corn. We enjoyed over 1000 vertical feet of corn before carefully picking our way through the trees and eventually back onto the hiking trail–right where we started from. 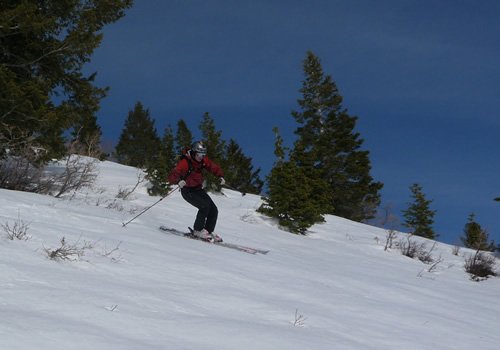 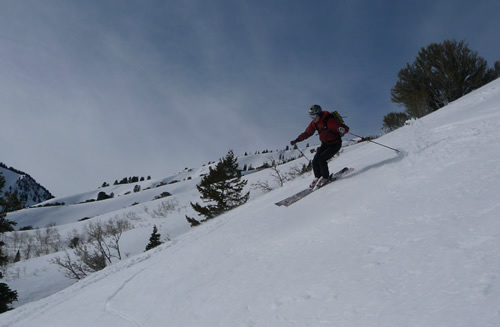 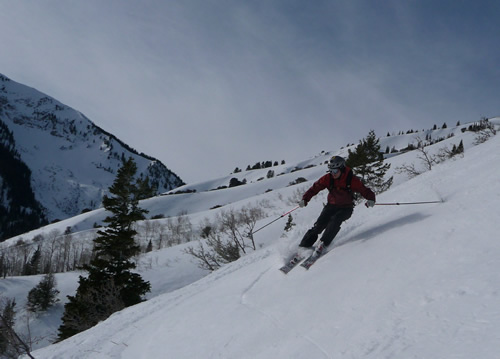 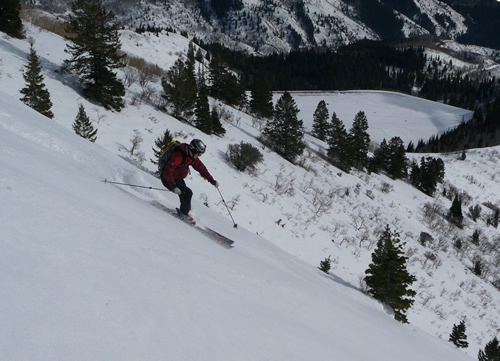 A great day in the Wasatch and awesome “Spring” corn turns in January. Click here to check out some of the waypoints I stored using my Spot Satellite Messenger. Not all of the waypoints stored, unfortunately, but some did.