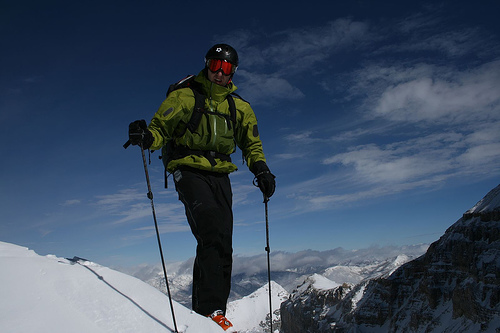 For two of the past 3 seasons I’ve started and finished my ski season on Mount Timpanogos in the Wasatch Mountains of Utah. At 11,749′ Timpanogos or Timp as most of us locals call it is one of those peaks that doesn’t come easy and even more so in the early season. It’s a 7 mile and 3200′ approach to get to the permanent snowfield with another 1000′ to the saddle where we usually start to ski. Weather or not there is early season snow the likelihood of skiing any of it on the approach is as thin as your bases will tell you the snowpack is.

When the snow started flying a couple of weeks ago I knew that the crowds at Alta would be plentiful. If I were just like the rest of the skiers in Utah, I’d take a 100 yard approach from the car to the slopes too. But the more I come to grips with it the more I realize that I’m not like the rest of the skiers in Utah. I don’t mind…er, I enjoy an approach that takes time and separates the…well, you get the picture. 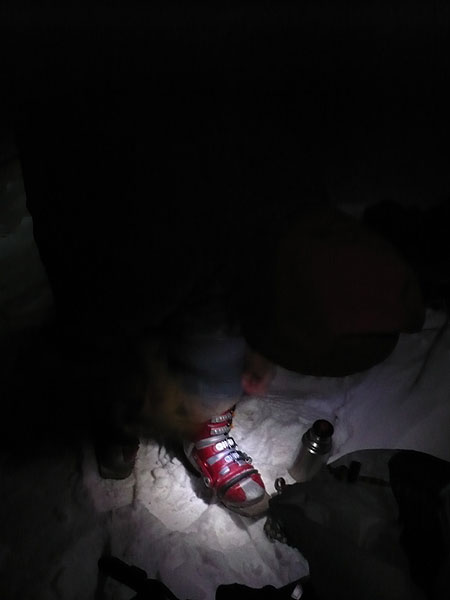 I made a few calls, sent even more e-mails and ended up with two ski partners for the season opener – Alex Stoy and Ben Brutsch. Ben and I had the pleasure of opening up the season last year on Timpanogos in late September of 2006 while Alex and I shut things down on Timp one afternoon this past July. It was a great crew to be in the mountains with.

While driving to Timp at 4am I was starting to feel that familiar sense of skiing creep into my person. Early morning driving, snowing outside, music jammin…yea, it was a dawn patrol.

Donning packs we started up Primrose Cirque on the Aspen Grove side of Timp. There was a couple of inches of snow but no nearly enough to start skinning. After a couple hours of hiking by headlamp and a spooky encounter with 3 moose, we saw the first rays of sunlight peaking our from behind clouds and the Uinta Mountains to the east.

Just shy of the top of Primrose Cirque I switched from my Salomon XA Pro XCR trail running shoes to my Scarpa Spirit 3’s . Amazingly the XA Pro’s did a fine job while hiking nearly 3000′ through 2-6″ of snow. My feet were still dry and not too cold either. The Euro Socks ski socks that I wore made sure I was warm. 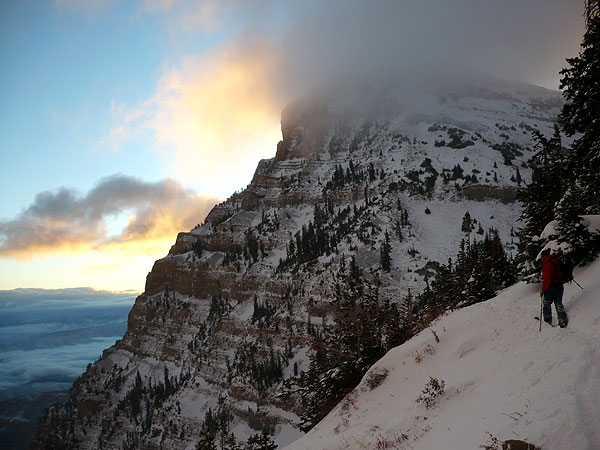 After cresting the cirque and catching a view of the summit beyond Emerald Lake we finally felt the warm sun on our backs as the wind whipped down the mountain. I knew that we’d be stopping at the hut to warm up in the sunlight and possibly make some Clif Shot Hot Cider that I was anxious to test in the field. 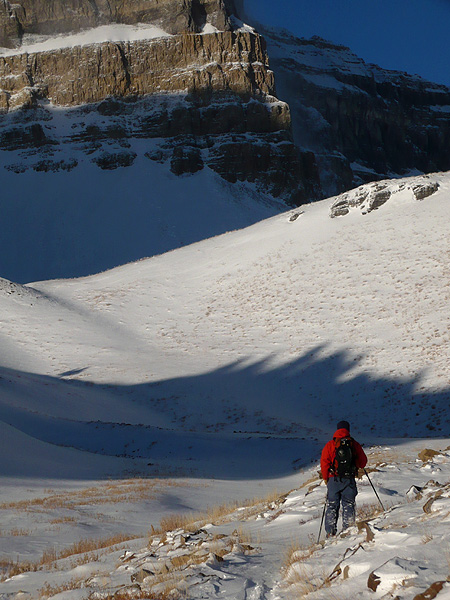 The warmth of the sun was almost negated by the splitting cold of the wind. Even in the lee of the hut it was breezy enough that I had my down jacket on top of the rest of my gear – Ibex base-layer, North Face soft shell and Arcteryx Sidewinder AR Jacket. And I was still chilly. Never under estimate the value of bringing a Jetboil stove along – the hot cider was like manna from heaven.

As we turned to skin up the snowfield the wind turned from the west to the south and blasted us head on as we made our way up the snowfield. I thought I was sluggish but then I would look up to see Alex and Ben also leaning over thier poles, taking regular rests. The snow was wind affected but we were penetrating 8-10″ with each step. Spindrift was pouring off the cliffs above and filling in our tracks.

After making the top I dropped in and found the familiar sensation of skiing powder. The snow was surprisingly good for how wind affected it could have been. I didn’t feel a rock and a few dozen turns and 800′ lower my legs were telling me that it was early season. But what an amazing place to start things off. Not a soul in site, two great ski partners and an view that would rival any mountain view in the lower 48. Earning your turns was paying off dividends. 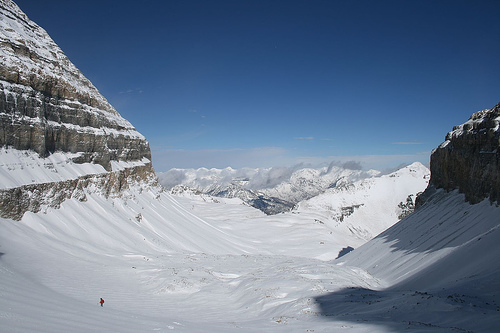 Despite telling ourselves that one lap would be enough I gathered enough energy and warmth to make the hike back up the snowfield. Just shy of the saddle Alex and I dropped in as the wind was making it both uncomfortably cold and hard going up. Ben got a couple of great shots of Alex bending the knee and making it look easy. 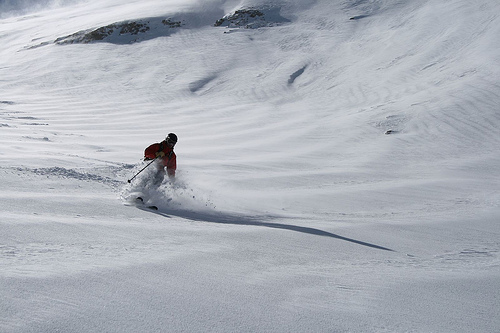 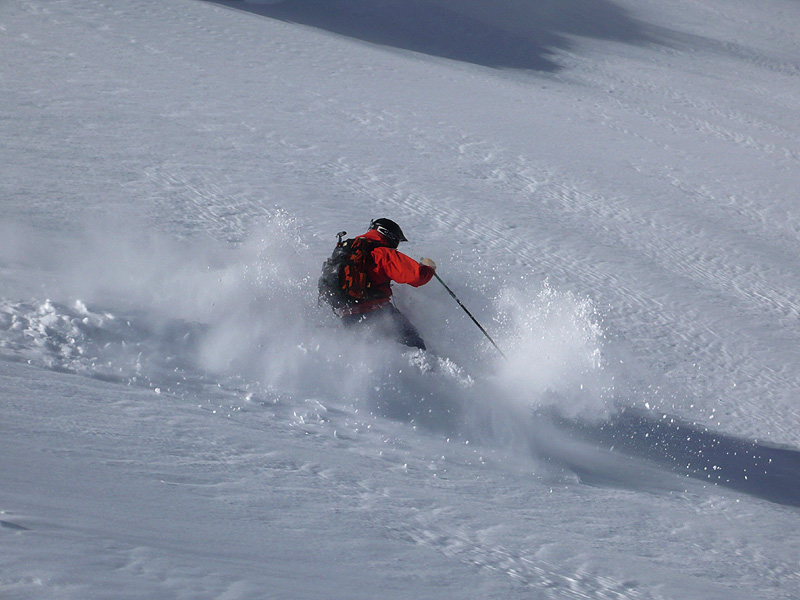 We managed to make the best of the descent. After another heaven sent gift of Clif Shot Recovery Hot Chocolate we linked snow drifts and patches for about 1000′ of the descent below the hut. As a result the bases of my Black Diamond Havocs have looked better but I can truly say that Timpanogos had indeed delivered once again on a season opener. If you get the chance to hit up skiing Timpanogos don’t pass up the experience. You’ll remember it forever.

Check out the rest of Ben’s photos on Flikr