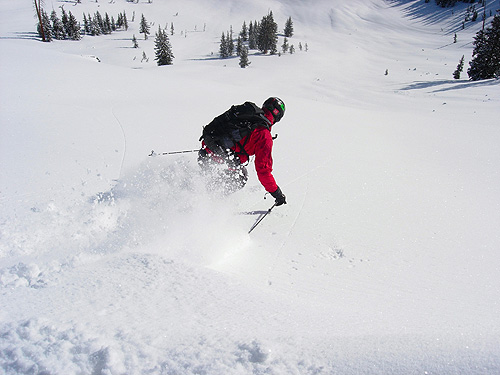 The Way the Wasatch Was

Like just about everyone else in the Wasatch and across the country for that matter, the 70 degree temps we had last week melted away nearly all thoughts of winter and sliding on snow. Bikes were ridden, climbing gear sorted out, tee times scheduled and the only trails that were sought out were those of the dirt variety. Such was the mindset of most Utah skiers when a nice little storm rolled through Utah leaving 8-15″ of new snow over the weekend.

Despite the blanket of white, I still wasn’t motivated to get out and ski. That was until my friend Matt phoned me up Sunday night at 10pm to ask if I was up for a dawn patrol. I ho and I humed and mentally sorted through my pile of somewhat valid excuses but in the end I had a hunch that it would be good.

By way of review it was extra cold on Sunday and had snowed all day and this after a somewhat slightly warmer Saturday storm.  The skies were clearing meaning the cold temps would suck even more moisture out of the snowpack.  Conditions were pretty stable.  All thing pointed to it being good but I just didn’t know it would be that good! The alarm went off (Mission Impossible alarm on my iPhone) at 4:45am and I staggered out of the wrapper to make our 5:45 meet time at the Little Cottonwood Canyon Park and Ride.

Had it been a February morning the lot would be a frenzy of dawn patrollers meeting up and rallying for a few precious turns before the man had his way with them. Aside from a white shuttle van Matt was the only car there. A deserted Park and Ride was evidence of a Monday morning and lack of motivation. Upon reaching the upper reaches of LCC, we soon realized that on this Monday morning there were just a couple of people ahead of us. In fact, we’d put in skin tracks up Flagstaff, Days and Toledo, skiing until noon while only talking to 3 people on what is easily considered the most popular backcountry ski spot in all of Utah. Half way up the skin track on Flagstaff I realized that if it weren’t for the lone snowcat making its way up Chips at Snowbird the entire canyon would have been dead silent. 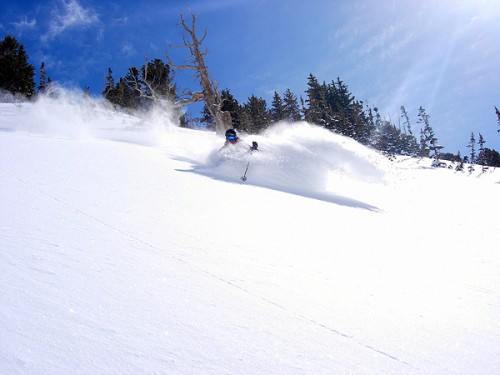 Yes, it was quiet, very quiet in the mountains today. Typing that indeed sounds odd, but in what some consider to be Wasangeles the drone of the lifts, snowmobiles, traffic, etc combine with what is typically enough skiers to make a slope look like a resort run by 11am, this day and the silence was an anomaly. I suspect that this was how it used to be when a crowd of skiers meant sharing Days Fork with one other guy, and the number of people you’d see in a day could be counted on both hands, or perhaps one.

In all we counted 8 people and miles of untracked lines that also are usually tracked out by mid morning. As for the snow?  Well, it was smooth, fast and as dry as mid February. What made it even better were the bluebird skies with views of the entire range and the Uintas to the east.  The calendar may have indicated that winter is done but Monday in the Wasatch I had a date with winter and it felt like old times…it felt good.