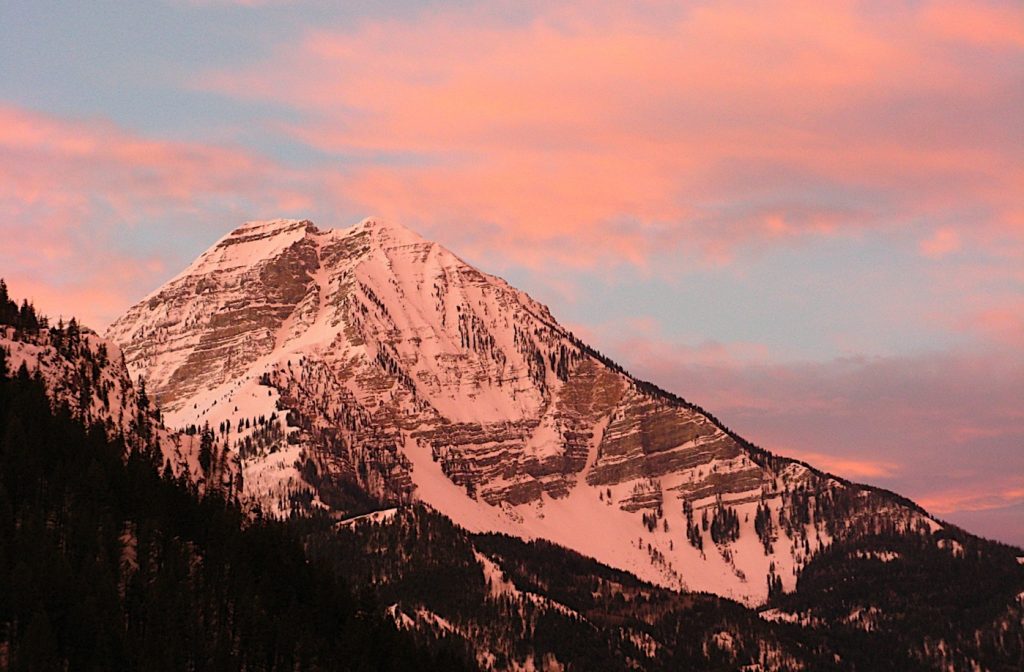 The goal wasn’t to summit, just to find some creamy, week-old powder on the northeast ridge of Box Elder Peak. In the end we had our fill of adventure and excellent turning conditions to boot.

Box Elder sits at 11,101 ft. and is highly visible from the north end of Utah County. With its near-perfect pyramid shape, it’s one of those peaks that draws attention. But with all that visual attention, the peak gets little actual traffic because it’s not quite as accessible as others in the area. During the winter, I always stare at its summit, thinking about how awesome the ski-descent would be.

As I’ve begun exploring American Fork Canyon’s backcountry skiing potential, Box Elder has been of of the most wanted descents in the area. The approach is long and there’s a ton of vert to ascend, but ultimately, it will be mine.

Today was another exploratory mission deeper into White Canyon, which takes you to the saddle between Box Elder Peak and White Baldy. Turning conditions were mostly marginal–except for pockets of creamy goodness in north-facing, shaded slopes. Our goal was to make some turns somewhere on the northeast flanks of Box Elder and hopefully find protected and shaded snow.

Pulling into the parking lot at Tibble Fork Reservoir, things seemed busier than ever before–maybe because of the past few days of near-60 degree weather. As we left the parking lot, the sun began to crest and shine beautiful orange/red hue’s on the eastern slopes of all the surrounding peaks — I love sunrise in the mountains.

We made excellent time as we approached the ponds midway up White Canyon. from there, we decided to ski a northeast-facing glade off Box Elder. The angles looked perfect and we were anxious to get some turns in.

As we began our switchback-happy ascent, we were bogged down by clumping snow on our skins. I had never experienced snow sticking to my skins this bad before. It was as if we were wearing elevator shoes on our skis as more and more snow clumped up on our bases. The next 1000 vertical feet would be slow and arduous as we huffed our now 20 lb. skis up the slope.

I hadn’t previously thought I should carry my glide spray, but now it’s going to have a home in my pack for sure. Check out the elevator skis in the above picture. Arrggghhh… it was a slog!

The weather was warm and overcast with a few cloud breaks. But, as the wind kicked in later in the morning, things cooled down and made us feel a little more comfortable that winter hasn’t gone away just yet. At the top, I slapped on the lightweight Nau Shelter Jacket–which was perfect for blocking the wind and keeping me warm and dry.

Dropping in, we initially had marginal snow conditions, but as we hugged skier’s right, we found plenty of powder that had been shaded from the nuclear sun we’ve had recently. Oh yeah… the turns felt good. Smooth and creamy powder isn’t bad when you consider that we haven’t had fresh snow in over a week. The Black Diamond Zealot skis and Fritschi Freeride bindings I’ve been using were perfect for today’s conditions. I felt like a hero carving through the week-old pow.

The only negative about touring in American Fork Canyon are the long approaches. Just getting from Tibble Fork Res. to the base of Box Elder is at least 1.5 hours. Once there, the fun is just beginning as the slopes ascend relentlessly up another 3000+ vertical feet.

Skiing from the summit of Box Elder is still eluding me, but we had our fair share of creamy powder on the northeast side of Box Elder Peak today. We’ll be back.