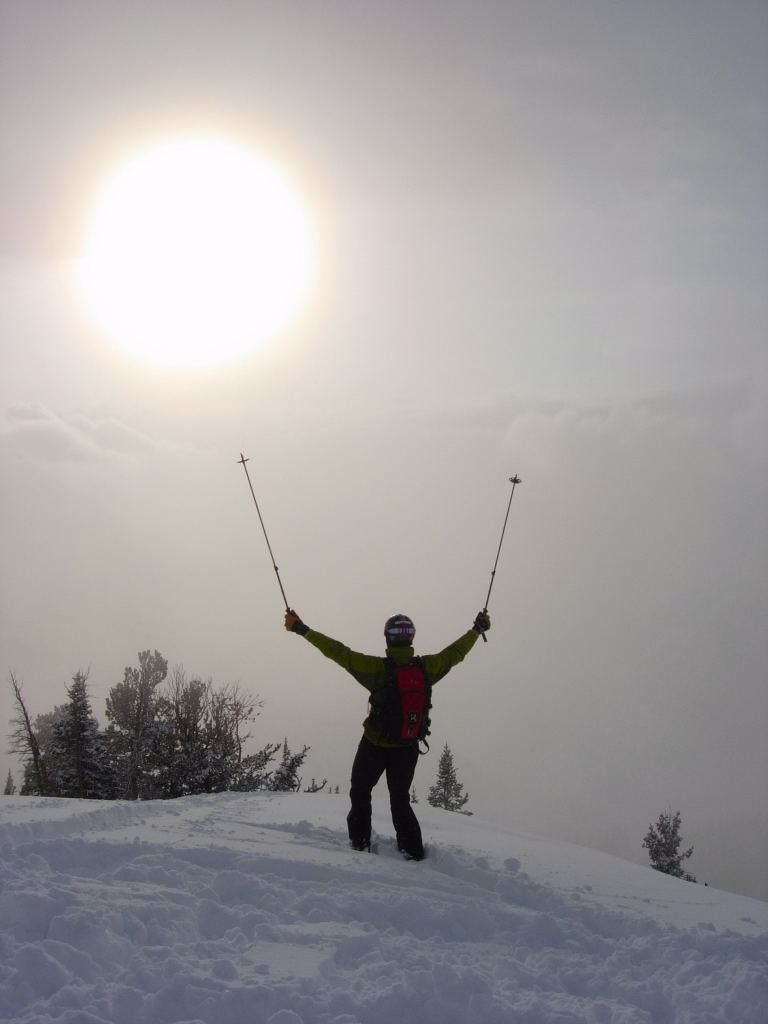 This has been an epic winter by any measurement. Alta has received 638″ so far with another storm on the doorstep. Mid elevation stashes like Mt. Aire are still enjoying full winter coverage. Nearly all of Utah’s ski resorts are still open but most of Utah’s skiers have biking/hiking/running/golf on the brain. For me, when April rolls around and the ski resorts start to to shut down it’s like the seventh inning stretch rather than the bottom of the 9th.

Monday dawned white with Alta reporting 3″, The Canyons 5″ and a storm on the doorstep. It was dumping in the mountains where I live and quite frankly the storm caught be by surprise. All morning while working I had one eye on the computer screen, one eye to the window watching the snow stack up. Around noon I received an e-mail from my buddy Matt Rink. It simply said,

Dumping right now…. I’m thinking a late afternoon/early eve in Powstash Bowl is what I’m having for dinner tonight …… want some??

Oh I knew I wanted some. Dusk Patrol’s are something special, a late season treat compliments of Daylight Savings. The problem, or so I thought, was my work load was stacking up faster than the 2″ per hour at Alta. I ho-hummed about going, relegating in my mind another missed storm to the man, to responsibility. While taking a break from the computer to get some eats, I mentioned to my wife the invite to ski but recounted how much work I had on my plate. Her enthusiastic response was the clincher.

“Have you seen how much it’s dumping out there!?! You’ve gotta go ski some pow!”

The man had been trumped by the woman. Dinner reservations for two in Powstash Bowl.

Powstash Bowl is actually a backcountry shot named Scotty’s Bowl just west of Snowbird Resort in Little Cottonwood Canyon. A roadside attraction visible by all who drive the canyon, it has long been on my list of shots to ski but each time I’ve gone up Little Cottonwood Canyon my destination has always been elsewhere. My open desire to ski it over the years lead a couple of my friends to name it Powstash Bowl after my online alias “powstash”. 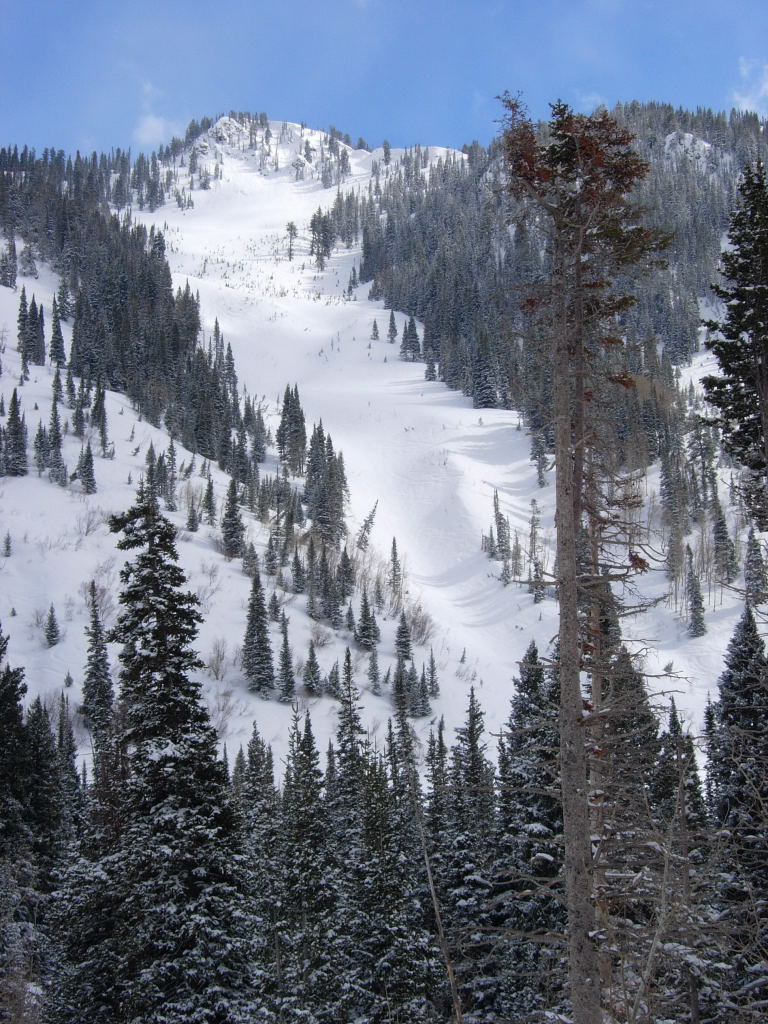 When we arrived a very brief window of blue greeted us but soon enough it would fade as black storm clouds from the horizon funneled up canyon. The 6″ or so of settled snow at the bottom soon gave way to 16″+/- and a steady snowfall as we skinned up the 2200′ that is Powstash Bowl. The trail breaking was tough but the reward would be well worth the effort. Little did I know just how good the reward would be.

Moments after arriving on top the sun began in earnest to punch through the storm clouds, revealing fo r a brief few minutes the entire run below and the Salt Lake Valley in the distance. The clouds were swirling around us, drifting over the ridge to our west only to dissipate in Powstash Bowl. I was in awe at the scene.

Although it shouldn’t have, upon dropping in the depth and lightness of the snow caught me by surprise. Like a 5 star restaurant serving up its finest on the menu, this reservation for dinner far exceeded my expectations. Although my calendar reads April, with each turn the light dry powder billowed up over my shoulders reminiscent of January days. The experience was surreal.

Matt Rink, seeing the light, skips the appetizer and drops in for the main course 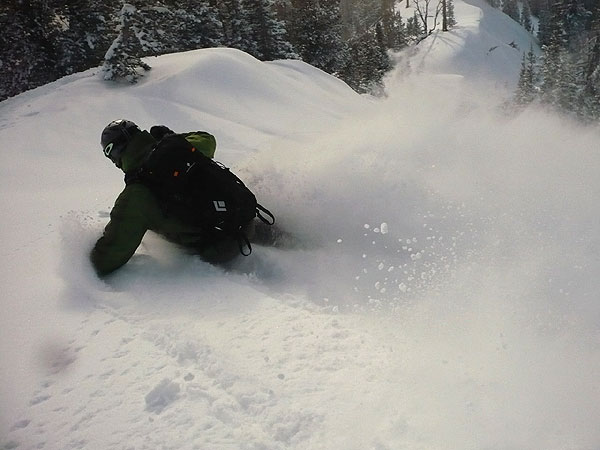 Getting some of it for myself 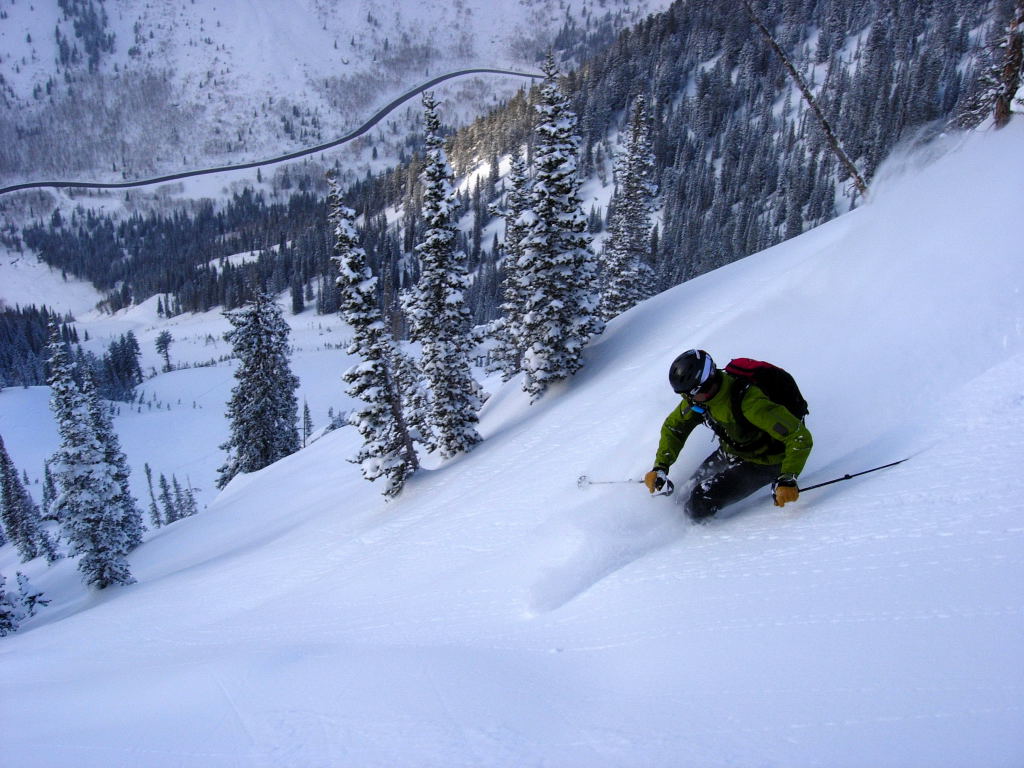 Does this entre come with desert? 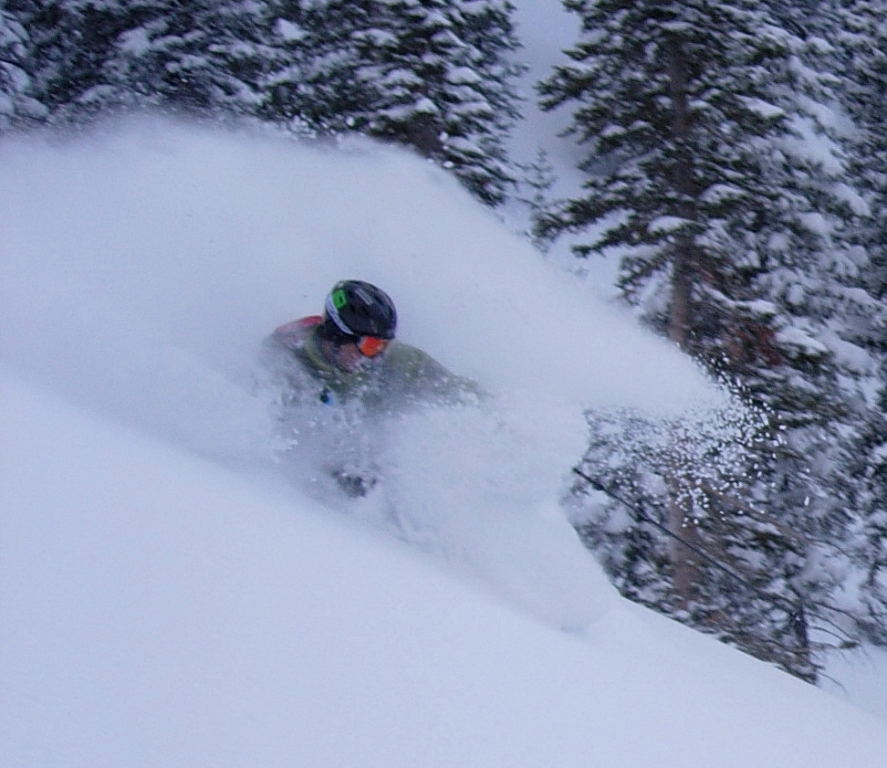 The heavenly light gave way to dusk, the clouds rolling in for another wave of snowfall. We spun a lap on the upper half of the bowl and then ran it 2000′ to the car. Matt said he’d never had it so good, so deep in Powstash Bowl. Arriving at the car I couldn’t recall exactly what work was set aside to accept this dinner reservation. For the moment, it didn’t matter. The memory of getting Powstash Bowl for the first time in conditions that good will be etched in my mind for years to come. 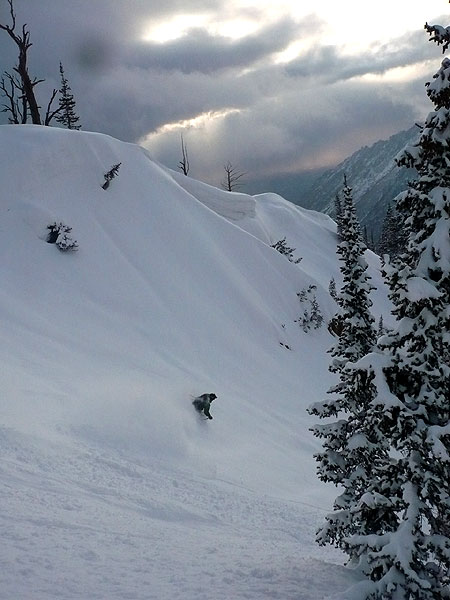