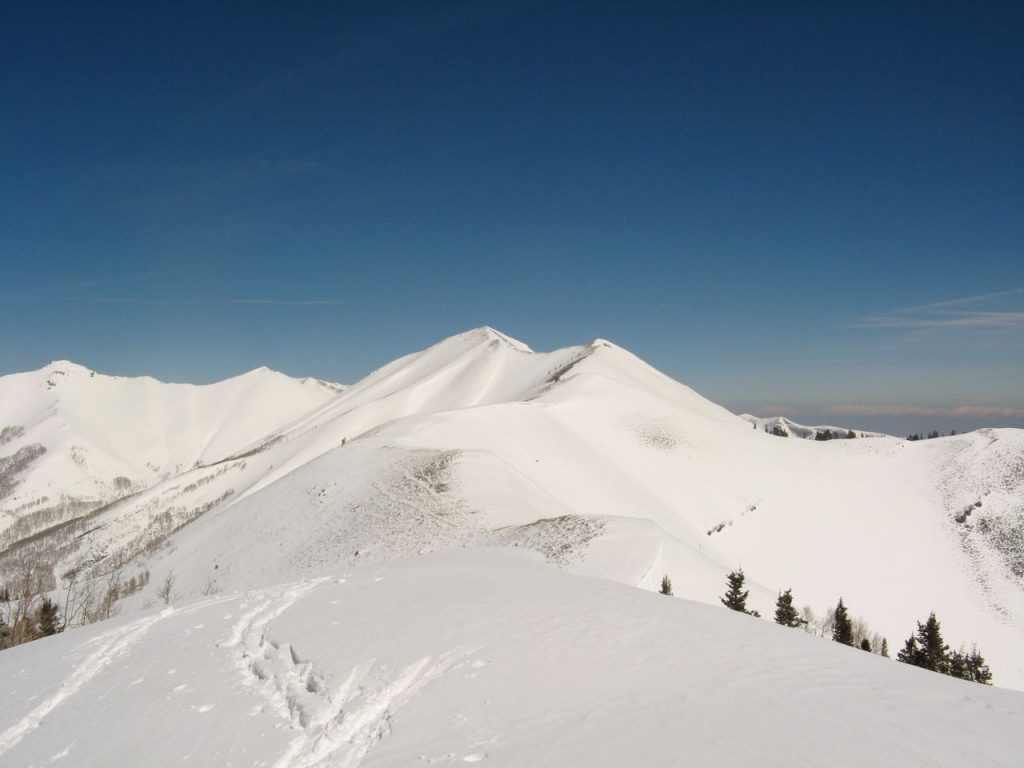 Sometimes across the street might as well be on the other side of the country. People get settled into their routines and stick with what’s familiar. Though I lean on the side of comfort, I long to explore and check out new places. This ski season has taken me backcountry skiing in less-traveled areas like American Fork Canyon and Parley’s Canyon. Most local backcountry skiers confine themselves to Big and Little Cottonwood Canyons, while areas to the north, south, east and west see significantly less — if any — backcountry traffic.

For years, I’ve stared the Oquirrh Mountains dead in the face as I’ve commuted into Salt Lake City. Both Flat Top Mountain (10,620 ft.) and Lowe Peak (10,589 ft.) loom within arm’s reach, but because they aren’t quite as accessible, they might as well be in Egypt to most people living along Utah’s Wasatch Front.

Inspired by years of wondering and a mid-season reconnaissance mission by a friend, we were determined to scope things out and do some powder mining in these hills that are legendary for their copper, lead, gold and silver deposits. In the end, we’ve staked a claim for the plentiful white gold in them there hills.

Getting there wasn’t so difficult. US-73 from northern Utah County takes you around the south end of the Oquirrh Mountains towards Tooele, UT. A quick 3 miles up the canyon is the town of Ophir, UT. From there, the route follows Serviceberry Canyon, Chandler Fork and then into Picnic Canyon. At this point, the entire west-facing basin from Lowe Peak all the way to Flat Top Mountain comes into view. Access into this area is a long slog with upwards of 8 mandatory creek crossings–something that gets old when having to unclick from your bindings around every corner.

We were amazed at both the consistent pitch and length of the skiable slopes in every direction. The only catch is that much of this range is on private land and the lower elevation approaches are typically filled with meandering creeks and thick scrub oak. But, good route finding skills and perseverance will pay off in spades as this area hides some of the longest and most consistently-skiable pitches I’ve seen.

Our goal was to make it to an old trapper’s cabin which would be the jumping point to the ridgeline south of Dead Ox Pass and open up a myriad of skiable, north-facing terrain interspersed with pine trees.

The early-morning sunlight only added to the awe as the long shadows made for surreal skinning through thick, 100-yr-old aspen groves. For some reason, everyone who has entered this canyon has taken it upon themselves to carve their name and date into the bark of the aspen trees at the bottom of the canyon. The oldest one we saw was dated 1924 — unreal.

From the old, rickety cabin, 1500-ft. of climbing would take us to the ridgeline south of Dead Ox Pass. We laid a switchback-happy skintrack through interspersed aspen glades and finally to the rock-strewn and windswept ridgeline. At the top, we whipped out the JetBoil stove and enjoyed a couple of rounds of Top Ramen–basking in the amazing views of not only the Oquirrh Mountains, but the entire Wasatch range from Ben Lomond to the north and Mt. Nebo to the south. Looking west, Deseret Peak and even further in the distance, Ibapah Peak were viewable. The vista is truly something to behold… again, all this because we simply decided to cross the valley and ski the “other” mountains that contain the Salt Lake Valley.

At this point, it was about 1:00 pm and the daytime heating was putting the hurt on all but the true north-facing, shaded slopes. Opting to drop into the gut back down to the old trapper’s cabin, we stuck to skier’s left so as to maximize both the shade and its north-facing orientation. Oh yeah… it was good! Boot-high creamy pow from top-to-bottom. All 1500 vertical feet of it was perfectly-pitched and consistent. My Bluehouse District skis were perfect for this tour… floating through the light stuff and busting through the thick, crusty pow.

Not content with a “one and done tour,” we decided to once again gain the ridgeline directly to the west of us and find a glade that we’d been eyeballing on the way up. At this point, the snow was getting soggy and the most recent layer was beginning to let loose, so the skintrack was a bit of a chore and route selection was of the utmost importance. From this ridgeline, we accessed the very glade we had picked out earlier and enjoyed more settled and consistent powder–again, a perfectly-pitched 1500 vertical slope.

By the time we got back into the exit route, the snow was soggy mashed potatoes, which made for difficult turning conditions. And, since we had already came and conquered, the myriad of stream crossings weren’t so bad because we just walked across–skis and all. It reminded me of Shane McConkey’s Ex-Stream Skiing bit.

We’ll definitely be back — at least a couple of times a year. The terrain is flat-out awesome. The length and consistency of the slopes are as good as it gets and you’re pretty much guaranteed to have the place to yourself. But, do keep in mind that there is a ton of private land in the Oquirrh Mountains and land owners are ultra-protective of their territory. Tread carefully.