TGR and KGB at Brewvies for the UAC – Recap

Don’t I feel like one of the cool kids, throwing around acronyms left and right. I’ll break it do 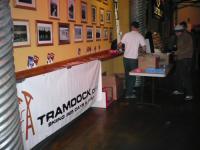 wn. As a recap from last Thursday night FeedTheHabit.com put together the Teton Gravity Research (TGR) and KGB Productions (some say it stands for Kitchen Goes Broke for Chris Kitchen who started KGB Productions) film showings at Brewvies as a fundraiser for the Friends of the Utah Avalanche Center who then gives the money to the Utah Avalanche Center. Holy run on sentence Batman!

No matter how you break it down the evening went well. We started things off by showing KGB’s Sublimation Experiment followed by a gear raffled off from our sponsors like Black Diamond, Tramdock.com, Bluehouse Skis, and PROBAR. Bluehouse Skis generously donated a pair of the MR skis for a separate raffle that alone raised $500. Aft

er the raffle was done we showed Teton Gravity Research’s Lost and Found.

Everyone that came to the show got a 2 for 1 lift ticket voucher for Snowbird Resort and a 20% off coupon card to Tramdock.com. The vibe was good and plenty of smiles to go around, especially for a guy named Jason who won the skis from Bluehouse Skis.

In total we raised $1550 which was all donated to the Friends of the Utah Avalanche Center. A huge thanks to the sponsors and to the people who showed up. See you next year – first Thursday of December at Brewvies.