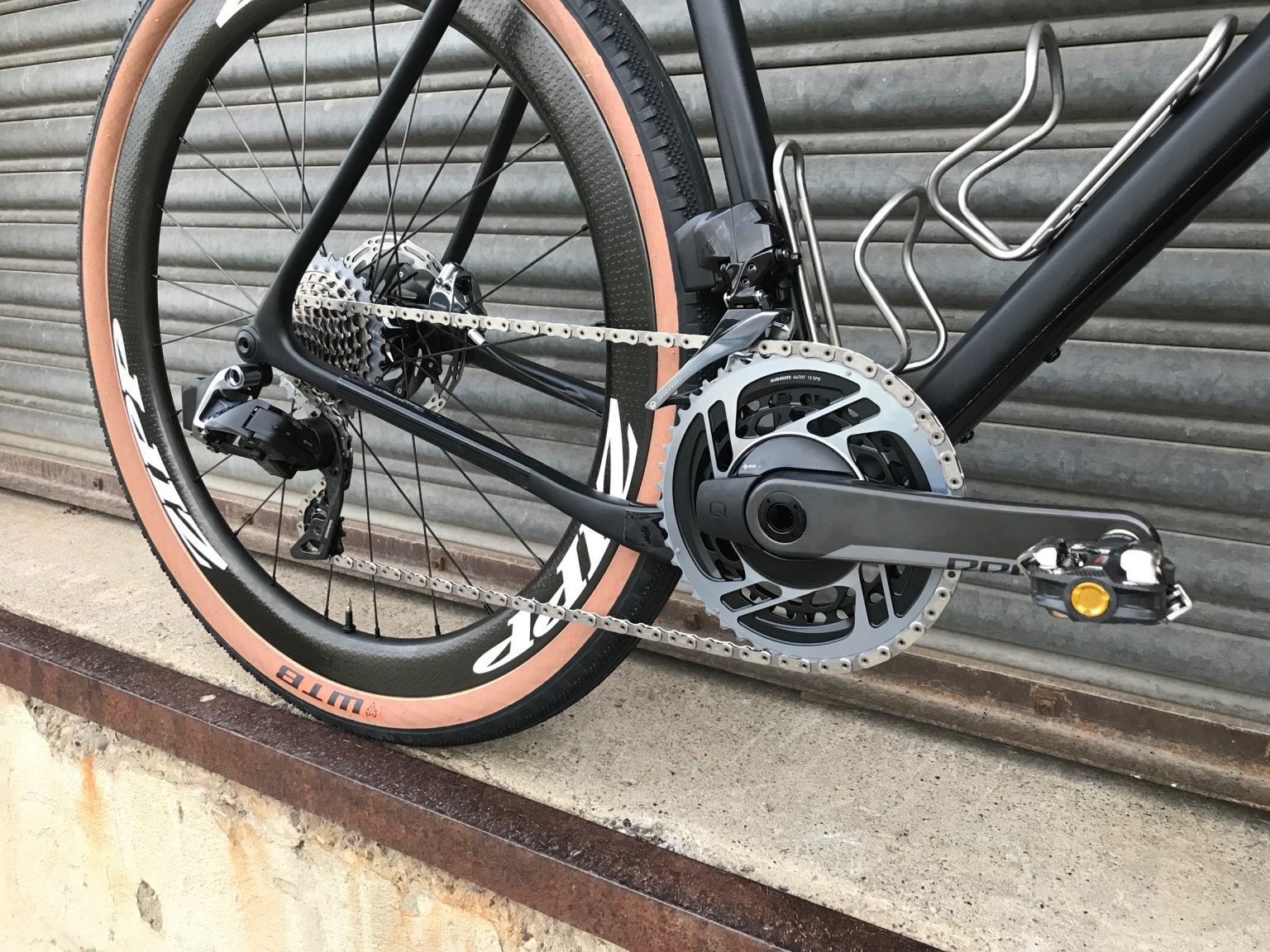 Rolling out of your local bike shop, any drivetrain is going to perform like a champ. But, what happens after 500, 1000, or 5000 miles is what really matters. As always, we aim for a thorough review and now, after 1000 miles, the new 12-speed SRAM Red eTap AXS is ready for a final verdict. My review in short: this all-new wireless drivetrain has delivered a mic drop.

During our annual trip to visit family in Minnesota, we often stop at the SRAM/Quarq offices in Spearfish, SD. In June 2018, the tour included my first Red eTap AXS sighting. I was promptly told “no pictures please,” but there it was in plain sight and I got a pretty darn good look at it. As the leaks started showing up online later that year, I considered myself lucky to have seen it well before its official launch February 6, 2019. With the subsequent release of Force eTap AXS, SRAM’s grand 12-speed wireless coup was complete and N+1 conversations worldwide began heating up.

Marketing talk is always rife with superlatives and SRAM is quite proud to have the only fully wireless groupsets on the market. But, how does this top-shelf and premium-priced groupset perform after 1000 miles? So, for the sake of science, I did just that aboard a Red eTap AXS-equipped Open UPPER. Among those miles were plenty of gravel and singletrack to go along with curvy mountain passes and lonely Midwest cornfields. Pavement, dirt and gravel served up quite the testing grounds and this groupset has remained as solid after 1000 miles as it was after its first mile.

With eTap AXS, that elusive 1:1 gear is now possible without losing much at the top end. So, with this gravel build, I was shooting for the best gearing for all roads and that’s just what I got. With 46/33T chainrings and a 10-33T cassette, I have that 1:1 gear for steep terrain, but also have that 46/10 for pedaling things out on a long descent. I did ride the slightly taller 48/35T chainrings with SRAM Force eTap AXS and that, in concert with the same 10-33T cassette, was a great range for the Specialized Venge Pro.

With a gravel bike, you can choose to go with a mullet build (1x up front with AXS MTB rear derailleur/cassette) or 2×12. Again, going 2×12 is great for the gravel terrain tested in Utah, Colorado, South Dakota and Minnesota. None of the gravel roads or singletrack were so steep that I felt overgeared. Even on local singletrack, that 1:1 gear was only used under extreme circumstances.

With Red eTap AXS, the rear derailleur features the Orbit fluid damper to control chain slap. Not only does this mean a quieter drivetrain, but your chainstay will remain clean and ding-free. I have clear protection on the Open UPPER and there’s absolutely zero evidence of the chain impacting the chainstay — even after 1000, often-rugged miles. That quietness alone is worth the price of entry. When going between Red eTap AXS and Shimano Ultegra Di2, the difference is noticeable.

Not only is it quiet due to a lack of chainslap, but the whole drivetrain itself is quieter. This is very noticeable when riding on an indoor trainer. The entire drivetrain is library quiet. Shifts are quieter and smoother. My wife can sleep tight while I’m riding away on Zwift.

And, with these optimizations, shifting speed is also improved over SRAM 11-speed eTap HRD. Having spent thousands of miles aboard the original rim and disc-brake eTap, it’s subtle, but noticeable. And, those Formula 1-inspired shifting paddles are bonkers intuitive. Shift paddles have been updated from Red eTap. They feature a more tactile texture for even better lever feel. It’s great with or without gloves — something that’s problematic with Shimano’s shift buttons/levers. The shifters and brake levers are easily-accessed both in the hoods and in the drops. Again, when going back-and-forth with Di2, I find myself trying to eTap the Di2 shifters (but that just doesn’t work).

To further enhance shifting, you can opt to tweak things using the AXS app for iOS and Android. With the app, you can turn on Enhanced mode (Sequential or Compensating) or Multishift.

In addition, you can re-assign buttons and such to your liking. See “10 Things You Might Not Know About eTap AXS” for more goodies. Sequential and Compensating modes can be disabled on the shifters, should you want to change it up mid-ride. And, if all that app hoo-ha is too much to think about, you can just ride with the default settings and you’ll be as happy as a clam. I mostly kept things standard throughout my tests, but will tinker as time goes on.

You will eventually want to download and use the AXS App for firmware updates. In my experience, all updates have installed without a hitch over the course of several years now. It’s WAY better than Di2 updates, which, if done with their mobile app, have a tendency to brick your drivetrain. I’ve done that multiple times on multiple Di2 setups and have given up. Good thing my neighbor has a PC as that’s the only way to revive a bricked Di2 system.

I’ll add that the Orbit dampener that keeps the chain taut makes chain cleaning and lubrication even easier. I find that I can apply more pressure with my cleaning rag in both directions without derailing the chain from the front chainring. That Orbit dampener is to be thanked for that little added bonus every time I lube the chain.

With a single tap, I could stand and pass other riders or power through any of the numerous switchbacks. And, on the shorter climbs found on my daily routes, the large chainring rolling through the full 10-33t cassette is plenty enough range to conquer just about everything but the steepest of local climbs.

And, should you need to downshift that front derailleur, it’s only a 13-tooth drop on all chainring combinations. Keep an eye on the derailleur stop limit screws. I had an overshift off the small chainring and onto the bottom bracket on a tough climb. It scratched up the carbon a little and messed up my vibe. A small turn makes a big difference with 12-speed, so all it took was a quick turn of the limit screw and that’s never happened again.

Again, that Orbit fluid damper is the story here. Even on the roughest terrain, the chain remains taut and slap-free. Because this groupset is on an Open UPPER, I’ve tested Red eTap AXS with 5 different wheelsets in both 650b and 700c. I’ll be honest, I’m a huge 650b fan. And, with 11-speed eTap, 47mm tires weren’t compatible. Thankfully, the Red eTap AXS front derailleur now has plenty of clearance for even the widest tires.

I rocked a set of Roval CLX 32 650b wheels with Specialized Pathfinder Pro 47c tires for 100 amazing miles at SBT GRVL. That combination is my favorite and is completely possible with Red eTap AXS. As with any chain, after those 100 dusty miles, the drivetrain began to get a little louder. A quick chain cleaning and lube fixed that right up.

I’ve tested most of the popular power meters on the market and to be quite honest, none offers the simplicity that Quarq provides. It pairs up in a jiffy with any head unit and provides detailed individual leg power and cadence without magnets or left-leg units. It’s all contained within the integrated DZero spider/chainring combo. Yes, it’s integrated with the chainrings, but SRAM has built the chainrings extra-durable (said to last 50% longer than 11-speed). And, when it comes time for replacement, they will replace it at 50% off and recycle the old one.

Training with power is an incredible tool. It is a $510 upgrade to an already wallet-busting groupset. I’ve found the power measurements to be accurate and actionable. Should you use any number of training programs, the DZero will take you there. Or, if you’re like me, the combination of Wahoo and Strava’s power analysis does the trick. I can quickly see how my power output is trending and what each ride did to my fitness. I also use it to compare bikes and other equipment on identical routes. The DZero is the industry standard, in my eyes.

Comparing the power output data from the integrated DZero to the Saris/Cycleops H2 Smart Trainer, it’s spot-on. I have no hesitation relying on Quarq’s power data.

The carbon fiber Red eTap AXS levers are comfortable in hand and accommodate both reach and contact point adjustments for the perfect pull every time. Power is consistent and absolutely solid. Again, disc brakes do have the potential to overpower the contact patch, but SRAM has done a great job of allowing that power to be modulated. Power is moderated and oh-so-smooth. Even under the hardest braking situations, I’ve yet to lock things up and I always have the ability to stop with ease.

The combination of these levers, calipers and 160mm rotors provide the most consistent and adjustable braking experience available. Pad retraction is excellent with only minimal rotor rub here-and-there after long descents. Adjusting them has been easy and centering the pads is accomplished with the usual tricks (loosen the calipers, rotate the wheel, compress the brake lever and tighten).

Things to keep an eye on…

As with all eTap or AXS products, you have to keep an eye on your batteries, but they do last a good distance without worry. Picking up a spare is recommended. Detachable batteries does make it much easier to rotate through them every 4-6 weeks. And, on initial setup, a little turn of the limit screws goes a long way. This is particularly true with the precision needed with 12-speed cogs and chain. Shifting is fast, but overshifting can happen fast if your limit screws aren’t set properly.

Note: Not all 1000 miles were ridden with the XG-1290 cassette. I swapped wheelsets several times and used the XG-1270 on various wheelsets for at least half those miles. Shifting is louder on the 1270, but just as quick.

As the only wireless go upsets on the market, SRAM’s Red and Force AXS is the current benchmark. On a gravel bike, the combination of wireless shifting and 1×12 gearing with a 1:1 combo and the Orbit fluid damper makes for quiet and smooth operation — even on the most rugged terrain. On rugged terrain, shifting is as fast and smooth as it is on brand new tarmac. Going Red eTap AXS will set you back a mint, but if ultimate performance is your desire, this is the groupset to beat.

As SRAM's top-shelf groupset, Red eTap AXS delivers on all the superlatives that the marketing material proclaims. It shifts faster than any other electronic drivetrain. It's the easiest to setup of any drivetrain on the market. And, above it all, Red eTap AXS just keeps on trucking after 1000 brutal miles of dirt, gravel, singletrack and pavement. Yes, it's expensive, but that's why Force eTap AXS exists.