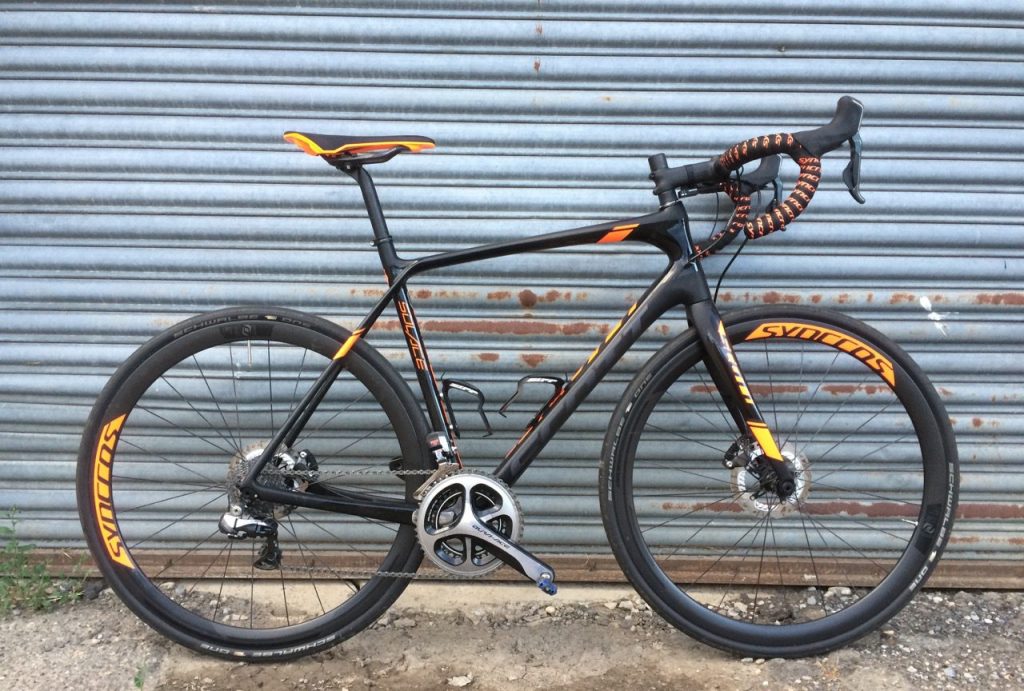 When Scott introduced the new Solace platform for 2014, it was an immediate win for the company. With a pedigree more well-known for lightweight climbing and aero bikes, a winning endurance bike had escaped them. And, after a couple of years, the Solace is now coming into its own — primarily in disc variants with the Solace Premium Disc being the premier flavor.

Solace is a racy endurance platform

Scott engineers know how to eke every gram and maximize every watt — they obsess over minute details. With the Solace, they worked over the frame to achieve the best in compliance, comfort, stiffness and weight. Again, the standard vertical compliance with lateral stiffness comes into play (Scott calls it Power and Comfort Zones). That said, the Solace’s geometry is otherwise race-oriented.

If you look further at the frame’s geometry, it is very similar to the Addict with the notable exception of a taller head tube and shorter top tube. That extra height makes for a friendlier fit for the rest of us that can’t handle extreme saddle-to-bars drop like the pros. The result is a pro-looking frame and cockpit setup with minimal spacers and responsive performance. Notably, the wheelbase is actually shorter than the Addict — not something you’ll find on other endurance bikes on the market as most are stretched and slackened.

So, knowing that the Solace is not your father’s endurance bike should cause aggressive riders to sit up and listen. Without question, the Solace can be pushed and pushed hard and it will respond in kind.

Scott couldn’t release a premium version of the Solace without a premium kit. As such, the entire build leaves nothing on the table and does so at a fantastic price point ($500 lower than the Specialized S-Works Roubaix Disc and $1500 less than the Cannondale Synapse Black Inc.).

House-label Syncros components are top-notch products with a proven track record and the RP1.0 wheels feature DT-Swiss hubs for industry-standard compatibility. However, the freehub is wicked loud — I’m not kidding, this thing could wake the dead. The carbon rims are also very narrow (a mere 15mm inner width) by today’s standards and do make a 28mm tire seem more like a 25mm. That said, they do roll well and at 38mm, they are a touch taller than the competition to eke out a bit more aerodynamic efficiency. At that depth, crosswinds may become a concern, but I didn’t notice much in that regard.

All things considered, these are a great wheelset and really improve the performance of the Solace. In my rolling tests, they roll almost as well as the Bontrager Aeolus 3 TLR Disc (the best I’ve tested).

I also fell in love with the included Syncros RR1.1 carbon bars. Like Ritchey’s EvoCurve, these feature a slight backsweep on the ovalized tops for added comfort. Reach and drop is short/shallow for ease-of-fit. The remaining Syncros kit is worthy of the “Premium” moniker.

The biggest highlight of the Solace Premium Disc is its use of a full Shimano Dura-Ace Di2 groupset with RSS805 hydraulic discs and 160mm rotors. They didn’t cheat by adding an Ultegra cassette — no sir. This is a full Dura-Ace kit and performance has been sublime. Electronic shifting is an eye-opener and Dura-Ace Di2 offers crisp shifting above and beyond anything else Shimano offers. I mean, Ultegra mechanical is reliable and predictable, but it’s not crisp or is it fast. Stepping up to Dura-Ace Di2 means rapid shifting, easy gear dumps and rasp-free shifting in all gear combinations. And, the levers feature improved ergonomics over Shimano’s mechanical ones with a better feel.

I will say that the small, upper shifting buttons can be elusive — particularly on cold rides. In reality, that button (though rubberized) is really small, which makes me understand why most riders opt for mechanical for the Cobbled Classics.

While many so-called road purists continue to scoff at both the odd looks and questionable utility of disc brakes, I’m decidedly a fan (in spite of the challenges with road discs). These Shimano stoppers offer superb brake feel and control with unbelievable modulation. While stopped on one ride, I had a conversation with another rider and explaining discs came down to modulation and he “got it”. Without them, this bike would be 15 lbs, but with them, I’ve enjoyed consistent braking on steep descents and rainy lunch rides.

As usual, I spent a couple of quick rides shaking out the fit and other niggles. Once the cockpit was dialed in, the only other item that took some time was the rear rotor, which appears to have gotten bent somehow. That constant tick, tick, tick is frustrating, especially on a long ascent (like the Alpine Loop) where every rub translates, at least mentally, into lost power. After spending time trying to center the caliper, I finally opted to carefully bend the rotor and was able to pretty much eliminate that rubbing.

Again, the Solace Premium features Scott’s top-end HMX carbon fiber layup. What that means is you’re getting their lightest frameset, but it’s also the stiffest and most responsive. In this case, that means that the Solace is going to ride more on the racy side of the endurance spectrum, but that’s not a bad thing. Granted, if you’re looking for a cushy ride, you’ll want to look elsewhere. But, if you want the chop muted, but still remain in touch with the road, this is your bike.

That road feel translates into some serious responsiveness when pushed hard, but you have to remain attentive. It does require a capable handler to get the most out of it. Ride it aggressively and you’ll continue to be surprised by just how racy this bike can be. In fact, since I’ve ridden the Addict SL, I’d say it rides and feels darn-near identical to that, but with a friendlier fit.

On both long, sustained climbs and short, steep stints, the Solace feels great. When standing, the front end doesn’t flop around and you can really get into a nice rocking rhythm. The huge bottom bracket transfers 100% of your energy and the stiff rear end rockets you forward.

Heading downhill, the Solace prefers to be handled with a strong hand and likes curvy roads. So long as you’re turning, it remains controlled and comfortable, but on straight, fast and bumpy roads, things got a little dicey for me. Keeping that weight forward is key, but luckily, most descents aren’t straight affairs. Just stay on top of it and this bike rewards you on the descents. For reference, I’ve been running 90/95 psi. in the front and rear respectively.

I’ll add that if I was to rate this bike on looks alone, it would be an 11 out of 10 — it is a stunning bike in my opinion. And I’m not the only one. Several others have also commented on just how cool this bike looks. Luckily, that beauty is more than skin deep on this one.

As the best endurance bike in Scott’s lineup, this one shines. The entire kit leaves nothing to be desired — and I mean it. We’re talking carbon clinchers, top-end HMX carbon frame and a full Shimano Dura-Ace Di2 kit here. Add that up against the competition and your wallet will thank you. Value aside, this is a performance-oriented endurance bike. You’ll get a more comfortable riding position, but won’t give up anything on the performance side. Stay on top of it and this bike will respond in spades.

The top-of-the-line Scott Solace Premium Disc doesn't hold any punches and comes out at a killer price point compared to the competition. Everything is premium about this bike and top-to-bottom it delivers performance with a refined yet racy ride. The build kit is superb with only a few niggles and the overall package really is a great-fitting endurance racing machine.