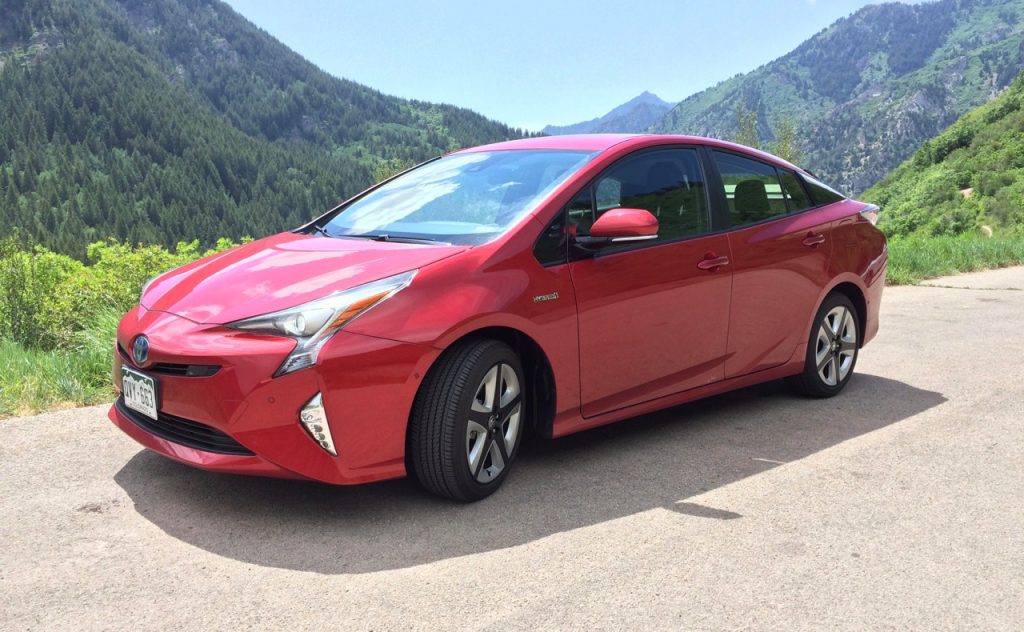 Ahh, the Toyota Prius. It is a curious little car that started off as an experiment, but has turned into something of a cult classic. All the while, I’ve stood aside and gratefully allowed hipster city-dwellers, retired teachers and Sierra Club card-members to enjoy the superb fuel economy that this previously-uninspiring hybrid brought to the table.

First off, I’m not a writer for Motor Trend or Consumer Reports, so I’ll leave reliability, 0-60 times and slalom speeds to them. I’m more interested in how the new 2016 Toyota Prius Four Touring can handle life as an outdoor enthusiast’s vehicle of choice. Just how versatile is it and how livable can it be for someone with an adventurous lifestyle? I care about stuff like cargo capacity, off road ability and an ability to handle sweaty, dirty passengers. And, of course, it has to be fun to drive back-and-forth on the daily grind and have enough technology to satisfy modern needs.

Before going into the highlights, here are some basic details about the Toyota Prius Four Touring:

A sedan has no place in my garage. No matter how much anyone tries to tell me otherwise, I will never own one. Luckily, the Prius Four Touring features a large rear hatch that opens up wide for unfettered access inside the rear of the vehicle (I guess you’d call it a hatchback, right?). And, with the seats down, it easily swallows a road bike for secure transport. Not all mountain bikes will fit, but many will as well. A win for hatchbacks! Another reason to never consider a sedan.

Alternatively, the Prius Four can apparently be outfitted with factory crossbars for $299 at your local Toyota dealer. The problem is that those crossbars are unavailable with no ETA — a call to my local Toyota dealer confirmed what people are saying online. I also looked at options from Thule and Yakima and neither show any options yet. I’m sure they are in the works, but I would be quite frustrated not having roof rack availability. However, given the large size of the rear hatch, some bike rack trays may not clear (pure speculation in the absence of real solutions).

While roof rack options remain a bit unclear, at least there are a few Class 1 hitch receivers available that can be used for bike racks. The install appears to be quite involved (bumper removal and trimming), but you can get a 1-1/4″ receiver for bike hauling duties. If this were my vehicle, that’s the route I’d go. As a bonus, because the rear hatch opens almost vertically, you may not have any bike/hatch interference when opening the lid with bikes on the rack. I don’t know that for sure, but it looks like it should clear.

Well, since it is front-wheel-drive, it will handle better than a rear-wheel-drive vehicle in adverse weather, but it will not be a replacement for an AWD or 4×4, that’s or sure. It does feature traction control, which should help in slippery situations, but the ground clearance isn’t going to get you anywhere other than good gravel roads without inflicting serious damage.

Is it fun to drive?

Not having driven the previous versions, I can only go on reviews from others, but it sounds like the previous-generation Prius models were lacking in the fun department. Knowing that, I had pretty low expectations with the Prius Four Touring — thinking it would be a grandma mobile. Quite honestly, I’ve been pleasantly surprised at the overall drivability, power and handling.

I don’t drive zippy cars on a regular basis, so I’m not expecting it to handle and drive like a BMW. However, it does drive quite well with only a small wind-up during hard acceleration. That transition seems to be due to the handoff between electric and gas and isn’t a huge detractor — it’s nothing like horrible turbo lag. Otherwise, the ECVT transmission is ultra smooth and I’ve not missed the typical gear jumps you get with normal transmissions — it’s been quite pleasant. The cabin is also really quiet and engine noise is fairly minimal.

Handling is really good overall. I can zip around town and it feels responsive and predictable with a nice, taut ride. Again, no slalom courses here, but it handles regular activities quite well. I will note that at middle speeds (30-50 mph), the handling can feel a little vague. It seems to do better at lower and higher speeds, but seems just a little “wandery” in the middle.

Fuel economy is downright silly. I’m not being ginger on the gas pedal and am still averaging well over 50 mpg (150 miles of driving and I’m at 55 mpg). In fact, I’ve exclusively driven it in Power Mode and it still shines. Hyper milers will rejoice as they can eke out even more economy out of this hybrid in ECO mode. I played with ECO mode for a few minutes, but it turns the vehicle into an unbearable slug — good for gas mileage, but bad for fun-factor.

OK, so the Prius Four Touring has a ton of technology packed into it’s little hybrid package. The dash display is wide and features a digital speedometer alongside all kinds of configurable details. In the console, we’re talking about a large touchscreen affair. The combination of the two can get a bit confusing at first, but it gets better. I’m still not 100% comfortable with all the tech, but I’m figuring it out without referencing the manual once. My kids figured it out in a jiffy, so there you go.

Something I wish manufacturers would do is go back to more tactile buttons. In-car touchscreens have not yet gotten to the same level of responsiveness as smartphones and I always appreciate tactility while I’m on the road. That said, this one is laid out relatively well and hasn’t made me want to swear at it yet.

The JBL audio is pretty good, but not mind blowing. Pairing with my iPhone was a breeze for playing music and making hands-free phone calls (worked awesome). I did download the Toyota Etune app, but didn’t want to proceed much further than that because it requires a new account, which I don’t typically have the patience for.

The Qi-compatibe wireless charging system is certainly cool on one hand, but given the limited devices that can use it, I’d call it more of a gimmick. I’d prefer easier access to a USB charging port in that location with intuitive cable management so I can tuck the cable out of the way and only expose the length I need. That would be a much more practical solution, in my opinion.

On the safety side, this is where I started geeking out. I’m also a safety nut (hence why I love both Subaru and Volvo vehicles) so as I explored the list of safety features, I got that warm, fuzzy feeling deep inside that only a safe vehicle can create. Of course, it has ABS and traction-control, but it’s also decked out with sensors all around the vehicle with cool stuff like lane departure warning/mitigation, cross traffic warning, blind spot detection, radar-controlled cruise control and more.

My kids were amazed at the parking assist feature, but it does get a little unnerving as the vehicle crept closer to the vehicle in front of me. I didn’t have the guts to wait for it to brake and always engaged the brake manually. The lane departure warning system did get a little annoying at times, but I appreciated the extra nudge to stay on the road. It works akin to the old “Operation” game we all played as kids — don’t touch the lines! An electric seat shocker would finish out that Operation-like experience (Toyota engineers, are you listening?).

I’ve tested all of the above and really love the peace-of-mind all that technology provides so I can do my best at avoiding accidents. Surviving accidents are also good as this has received a Top Safety Pick+ from the IIHS (see it here).

Visibility to the outside is good overall. Rearward, the rear hatch does inhibit a clear view, but it’s not terrible. Elsewhere, there is enough glass to comfortably see around the vehicle around town and on busy freeways. I’ll note that the token rear wiper is worthless. It clears so little of the view that it’s almost laughable. But, I will say that the rain-sensing wipers are fantastic. I loved not thinking about wipers, headlights, etc. as they just came on when needed.

I love the backup camera and the cross-traffic sensor is superb — something that came in handy on several occasions while pulling out from a blind parking space.

I use my vehicles like a mobile REI with all kinds of gear stored in the back. To do this, I use containers to keep my helmets and shoes in place and use a cargo net to stash all kinds of cycling jackets, gloves, etc. I spend a few minutes getting ready at any given trailhead and most often I sit on the bumper as I prep. My Outback has a nice-sized bumper with plenty of room to sit. This one, is narrow and uncomfortable at best — keep that in mind if you are a bumper sitter like me.

Additionally, I’ll go for a trail run or a mountain bike ride and return to my vehicle wet, muddy or both. On one trail run, I had to cross the creek at least 20 times (no joke). By the time I got back to my car, my shorts and shoes were dripping wet. The shoes could hang out in the back, but I proceeded to plop my wet backside in the driver’s seat — right on the black leatherette seats. After 15 minutes, the seat was wet, but not saturated. When I got out, I just dabbed up the wet spots and let it dry. When I returned a few hours later, it looked just as good as ever. I can’t speak for long-term abuse like that, but it has taken everything I’ve thrown its way.

And, with all that, the biggest question is would I buy one and could I live with this as my primary vehicle? While it is a nice ride and has a ton of great features, it simply lacks the utility that I need. But, if you live in urban areas and never have the need for all-wheel-drive or off-road capability, this is quite a nice vehicle. With the seats folded, it can swallow large, awkward items with aplomb and the gas mileage is seriously mind-blowing.