For 2016, Toyota updated their hot-selling RAV4 SUV by revising the exterior and adding a hybrid model. While hybrid cars are dime a dozen, hopping into a hybrid SUV remains a rarity, with Toyota owning that market hands-down. Using arguably the most refined hybrid drive system, the folks at Toyota can do things that other manufacturers just can’t. So, embarked on a 1-week test drive to see how the 2016 Toyota RAV4 Limited Hybrid can tackle my daily adventures of commuting, gear hauling and mountain driving.

Since 1995, Toyota has been seeing a steady increase in RAV4 sales with a significant uptick since 2013 when the latest redesign hit showroom floors. That’s great news for Toyota and great news for consumers who are enjoying the utility and predictability of this compact SUV.

For 2016, Toyota refreshed the exterior and added the hybrid model for improved fuel economy. On the road, I’ve been averaging just over 27 mpg, which isn’t earth-shattering and falls significantly below the stated 33 mpg for mixed driving. In my case, that drop in efficiency can easily be explained because I exclusively drove the RAV4 in Sport Mode. Why did I do that? Well, because both standard and ECO modes were pretty much unbearable.

I’m no lead foot, but I like a responsive vehicle and the only way I found the RAV4 to be fun to drive was in Sport Mode and, apparently, that means a 6 mpg drop. In the end, I’d take that sacrifice for improved drivability.

Heading up a long mountain pass, like Parley’s Summit near Park City, UT, the RAV4 was delightful. The engine remained steady — even on consistent climbs at nearly 80 mph. — and the CVT kept things moving without over stressing the engine.

The new, aggressive grill and headlights stand out.

How does it drive?

Well, again, I’m not a race car driver, but I want to be able to accelerate briskly when merging or turning onto busy streets. There’s nothing worse than hesitation when you need to punch it. So, I’ll say that the RAV4 is quite zippy in Sport Mode. You step on it and it will accelerate smoothly and, if you’re lucky, you might even squeal the tires a bit (yeah, I did that a couple of times).

I felt like the body held its own on winding mountain roads without too much body lean. The suspension keeps things under control just fine and it can be driven with a little bit of chutzpah if you want to. However, where things get loose is in the steering. I’ve never driven a vehicle with such a light steering feel. I mean, I can almost blow on the steering wheel and it will turn. That light steering results in a numb driver and an overly-vague feel at slow speeds. No question, the steering needs to be weighted better. 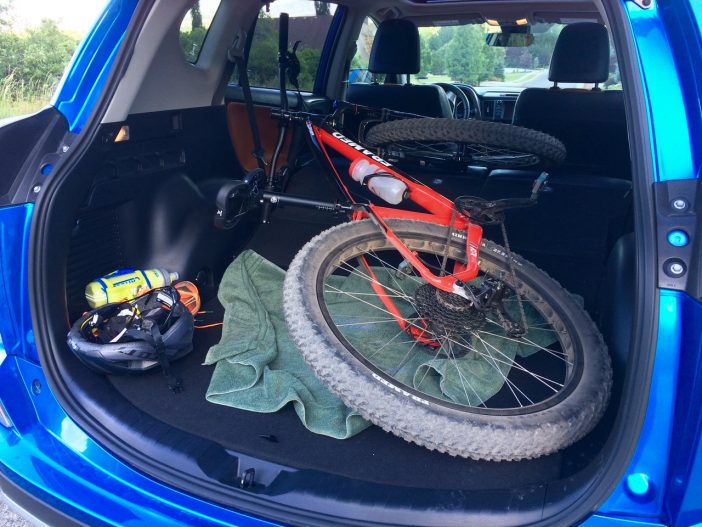 I can haul any size mountain bike in the back.

Of course an SUV needs to be able to haul stuff and this one is a mixed-bag. On the good side, it comes equipped with roof rails — something that the competition is skimping on. In fact, every trim level comes with roof rails. It is truly a head-scratcher that the competition (Mazda CX-5, Hyundai Tucson and Honda CR-V) only offers roof rails on some trim levels or only as an add-on. Since when is a roof rack optional on an SUV? Thankfully, Toyota is keeping the “U” in SUV.

Elsewhere, the RAV4 is just middle-of-the-road. The seats do fold down, but the levers are only accessible from the front. So, when I’m in the back and need them folded I’ve got to open the rear doors and fold them down. And, once they are folded, they don’t fold flat, but instead ramp significantly upwards with an awkward wedge compartment just at the base of the seats.

On the plus side, the RAV4 can swallow even a full-suspension 29er mountain bike (something that the Prius Four can’t do) and it can come equipped with a 1-1/4″ hitch receiver from Toyota or a 2″ aftermarket one. Not that I’d do much towing with this vehicle, but a nice hitch bike rack is mandatory.

Still in the hauling category, the power rear hatch is a great feature so long as you push the button well in advance. I guess I’d get used to pushing the button earlier with time, but I found myself waiting impatiently as it slowly opened and closed (first-world problems right?).

Don’t kid yourself, the RAV4 is no 4Runner and Toyota doesn’t claim it to be. As such, you’re going to want to tread lightly when heading off the beaten path. I was able to bottom out the suspension without too much trouble — even without a single passenger. The suspension does mute a good amount of dirt road chatter, but again, keep your speeds under control because any significant dips will max things out.

As far as wet weather traction, the AWD system has worked well with most of the power going to the front wheels and transferring rearward as needed. It’s not as seamless as my Subaru, but it’s good enough for most driver’s needs. 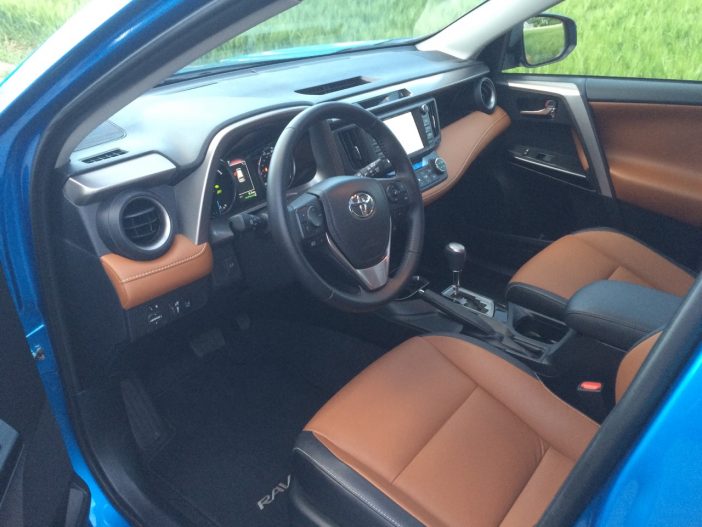 The interior is quite nice, but I’d prefer monotone.

The cabin is loaded with all kinds of technology, as you’d expect from a Limited model. The touchscreen system feels pretty standard and I do like the combination of tactile buttons for primary controls. The steering wheel controls are functional for both the head unit and the informational display in the dash. Connecting my iPhone was a breeze and delivered hands-free calling and Bluetooth audio streaming.

Something that’s amiss in this vehicle is button placement. I mean, there are buttons all over the dash and console. I’m talking tons and they are placed all over with little rhyme or reason to it. My favorite head-scratcher button is the traction control button that’s way over towards the passenger side. Note to designers: there will be buttons so plan ahead.

I do love the backup camera and parking sensors — that stuff is super-helpful. But, I don’t love that only the driver’s window has auto up/down. 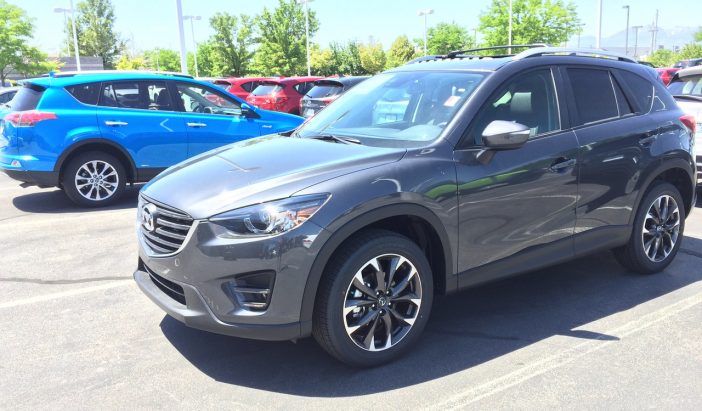 The CX-5 is my choice for a sporty, fun ride.

How does it compare to the competition?

As part of my review, I took the Mazda CX-5, Honda CR-V and Hyundai Tucson for a quick test-drive. I’d say the RAV4 sits right in the middle in my mind. It is predictable and will be reliable for years to come, but it lacks the “fun-ness” of the more sporty CX-5 (my personal favorite). Again, it’s predictably predictable and there’s no doubt that the RAV4 will be a smart choice for anyone who wants reliable, functional transportation.

If you’re looking for a reliable, functional compact SUV, the RAV4 is an easy one to recommend. On the performance side, it’s middle-of-the-pack — mostly due to the ultra-light steering feel, but on the utility side I’m giving it high marks because Toyota is the only manufacturer sensible enough to spec the entire RAV4 lineup with roof rails. For me, the hybrid design added smoothness, but didn’t give me the MPG’s I’d had hoped for, but if you’re OK driving in ECO mode, you’ll be rewarded.

A Seattle native, Jason developed a love for the outdoors and a thing for mountains. That infatuation continues as he founded this site in 1999 -- sharing his love of road biking, mountain biking, trail running and skiing. That passion is channeled into every article or gear review he writes. Utah's Wasatch Mountains are his playground.