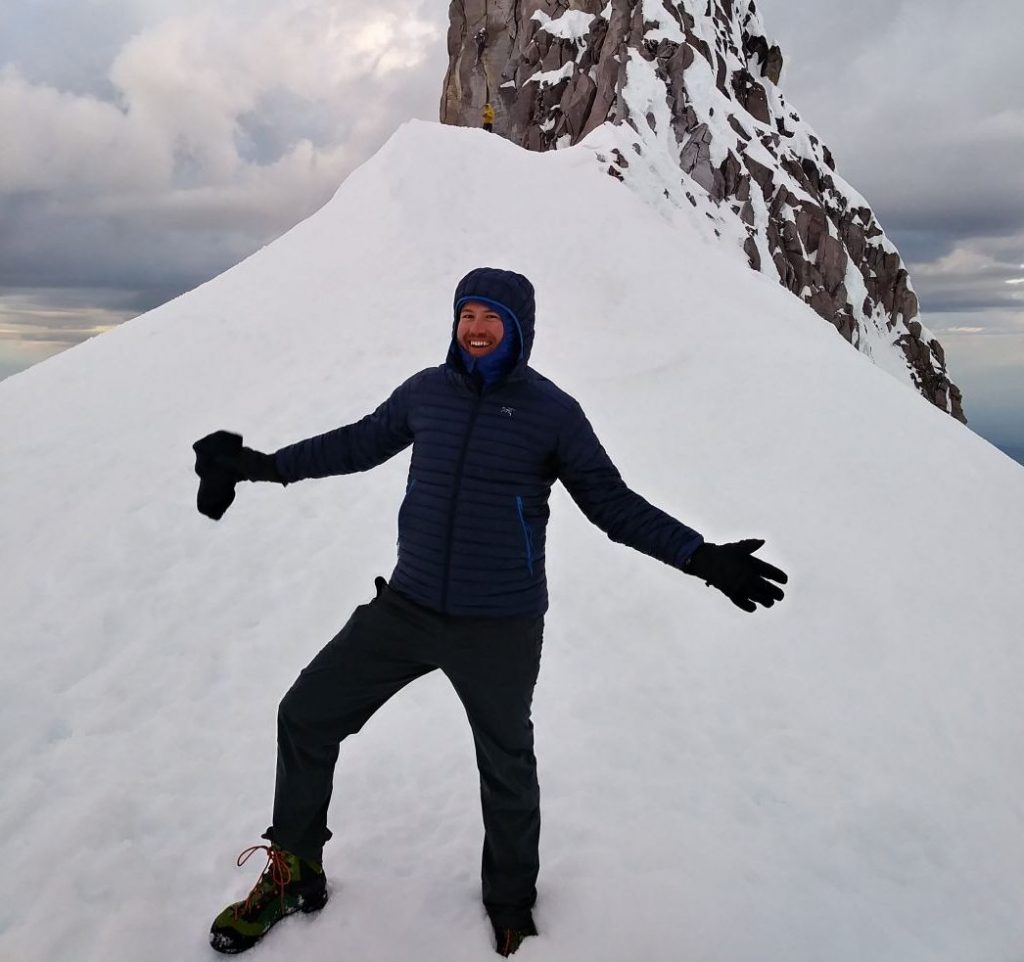 What would a springtime be without a little dead bird in it?? I’ve been toting Arc’teryx’s delightfully lightweight Cerium SL Hoody around throughout a very active PNW spring. It’s been ski touring, mountaineering, and walking through the park with me. Also, at 7.6oz total weight, it is an exceptionally lightweight insulator comparable to the best and lightest on the market. Here’s our review.

Lighter than almost anything, warmer than many

About five years ago, I reviewed the Mountain Hardwear Ghost Whisperer. It made big waves because it was the ‘lightest fully-featured down jacket available, clocking in at 7.3oz. I had to laugh when Arc’teryx revealed their 2018 Cerium SL, because it’s just three-tenths of an ounce heavier than the Ghost Whisperer but has many more features. How far we’ve come in 5 years!

All that to say, the Cerium SL is a particularly well-refined alpine insulator. It’s built out of very high-quality materials and is the lightest insulator in Arc’teryx’s down lineup. The foundation is a 7D nylon weave labeled ‘Arato’ by Arc’teryx. I highly doubt this is any different than anybody else’s 7D weave, but nonetheless it has some very fine qualities. These ultra-fine fabrics have a great deal of inherit wind and water resisistivity; it’s hard for water droplets to soak into the fabric, and wind can’t get through. Mind you, wind gets through the seams between the baffles perfectly well, so don’t look to this thing as a windbreaker.

The downside to 7D fabric is that, well, it’s pretty stinking light. Sure, it compresses well and holds off the elements – but it also likes to snag and tear. I fully suspect that this puffy will have 3 holes by the end of the season, and 6 by this time next year. That’s based off prior experience with these ultralight fabrics, and I’m as nice to my gear (once I’m done testing!) as anyone else is.

The next crucial element of the Cerium SL is its 850-fill goose down. This is the real deal. It’s hard to say much about the performance of this goose down except that it’s just about the best you can get. Every now and then you’ll see a specialty product with 1000-fill down, but they tend to be quite spendy. I was not able to discover how many ounces of fill the Cerium SL has, and I won’t hazard a guess. So it’s tough to say anything objective about warmth:weight for the overall jacket.

What I like about the Cerium SL is how finely it rides the line between being an ultralight ‘weighs nothing’ piece and a jacket that actually keeps you warm. This thing is no parka, but it’s also no fairy. I popped it on over my shirt at 8,500 feet on a windy Mt. Hood at dusk and felt very comfortable finishing camp chores. It stayed on until it was time for bed. Keeping me warm at dusk on a mountain takes some substance, and the Cerium SL has what it takes.

In addition to the 850-fill down, the Cerium SL has some strategically-placed synthetic insulation. The insulation is Arc’teryx’s proprietary ‘Coreloft’, an active insulator that handles moisture and breathability very well. Arc’teryx chose two weights for the Coreloft (100 and 40g/m2), placing the lighter one under the armpits and the heavier one on moisture-critical areas like around the baffle that holds the drawcord and the cuffs. It’s really functional and helps the jacket deal with wet PNW conditions. It’s interesting, too, that Arc’teryx managed to squeeze synthetic insulation into a 7.6oz jacket, since synthetic insulation tends to be so much heavier for its weight. So that impresses me.

Beyond these materials, Arc’teryx’s feature selection is careful and functional. There’s a hood adjustment and a hem adjustment, as well as two zippered hand pockets. This makes the Cerium SL a ‘fully featured’ down jacket – you can find lots of lighter ones, but they cut out these functional features. One hand pocket also has an attached stuff sack, which I really like. I don’t like shoving delicate 7D fabric jackets into their own pockets. The zippers always snag, you feel like you’re pulling really hard on tissue paper, etc.

One thing to be aware of: the zippers are quite small, the track is narrow, and they do not appreciate being horsed on.

In general, the features and the jacket work in perfect harmony. I love the hood adjustment because it secures the hood and keeps it out of my peripheral vision. The cuffs help to seal out wind, and the sleeves slide easily under glove gauntlets. The jacket is tailored somewhat trim, so it works well as a mid layer but can function as an outer layer on gentler days; this is aided in part by the drop tail which adds style and protection. I wore this jacket skinning, hiking and climbing Hood and really appreciated the versatility of a very light insulator that features some synthetic additions.

My only concrete issue with the jacket is that my particular Cerium SL had an issue with the hood adjustment. The elastic band popped out of its plastic pull toggle, resulting in it retracting down into the hood fabric. I’ve had great results with Arc’teryx’s warranty department in the past, the only bummer being that you have to pay to ship the jacket to them. However, I’m expecting a quick repair.

If you have the coin, you’ll be happy with the Cerium SL. However, if you don’t have the coin, there are lots of fairly comparable options that can be had for a lot less. But for those who ant Arc’teryx’s fabled design and crafstmanship, the Cerium SL’s careful feature selection and excellent materials will not disappoint.