The hard softshell is having a moment in the alpine world. With light and fast carrying the day for big-mountain players and ‘totally waterproof’ not the commandment that it used to be, many manufacturers are making beefier softshells, softshells that can handle being the only thing in your pack if the weather turns sour. Black Diamond’s offering is the First Light Stretch Hoody. 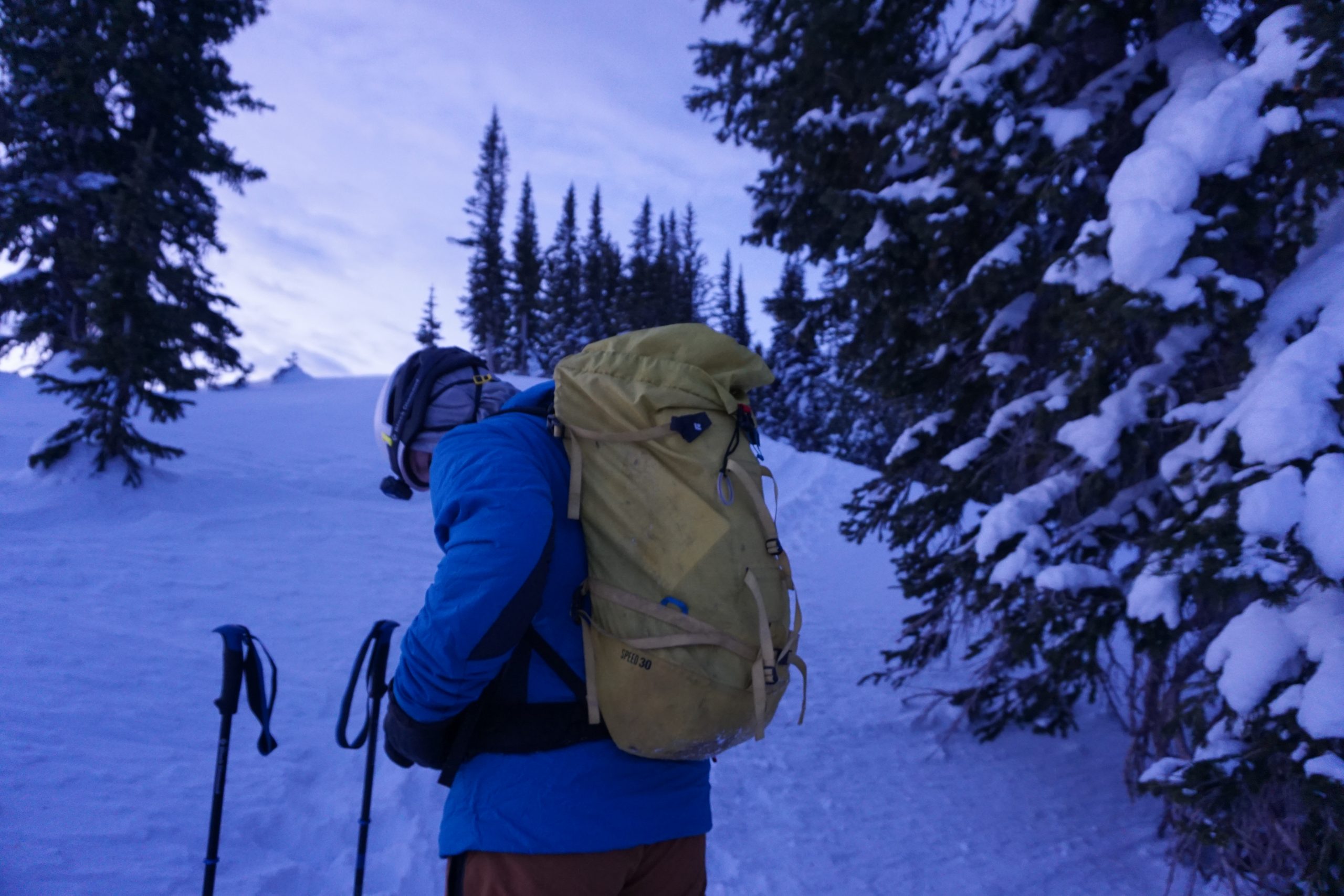 Deciding whether the jacket is active insulation or just for breaks.

The First Light Stretch Hoody falls into Black Diamond’s run of classic, bigger mountain apparel, the First Light series. It’s billed as a four-season, do-it-all jacket (wear it stopped, moving, climbing, skiing, walking, etc.) Wow, that’s a lot. Black Diamond’s biggest claim is that it is “breathable insulation”. Going into this jacket, I was skeptical of that claim. It’s rare that a piece worth its weight during a break will be anything but a sauna while moving.

I was excited for a piece that promised to be cool enough to walk around in, but warm enough to bring along. Bonus points if not every snowflake that fell on my shoulders melted into the jacket. On those counts, I was mostly satisfied. Other, smaller features I struggled with.

The fit on this jacket is looser than many in the category, such as the Mountain Hardwear Kor Strata Alpine hoody. It felt, while not baggy, more like an over-layer that I might throw on during a break other than a tighter-to-the-body moving piece. That extra size was appreciated when worn atop a climbing helmet. Most helmet-compatible hoods will nominally fit over a helmet, but prevent almost any movement through the neck. The First Light Stretch Hoody was almost luxurious in this regard, without being too parka-like. Continuing to the rest of the body, the jacket did feel a tad loose around the torso. As a broad-shouldered, but otherwise reasonably proportioned man, I felt that the other elements of the sizing were spot-on (arms, length, back width), but that it was rather barrel-chested. 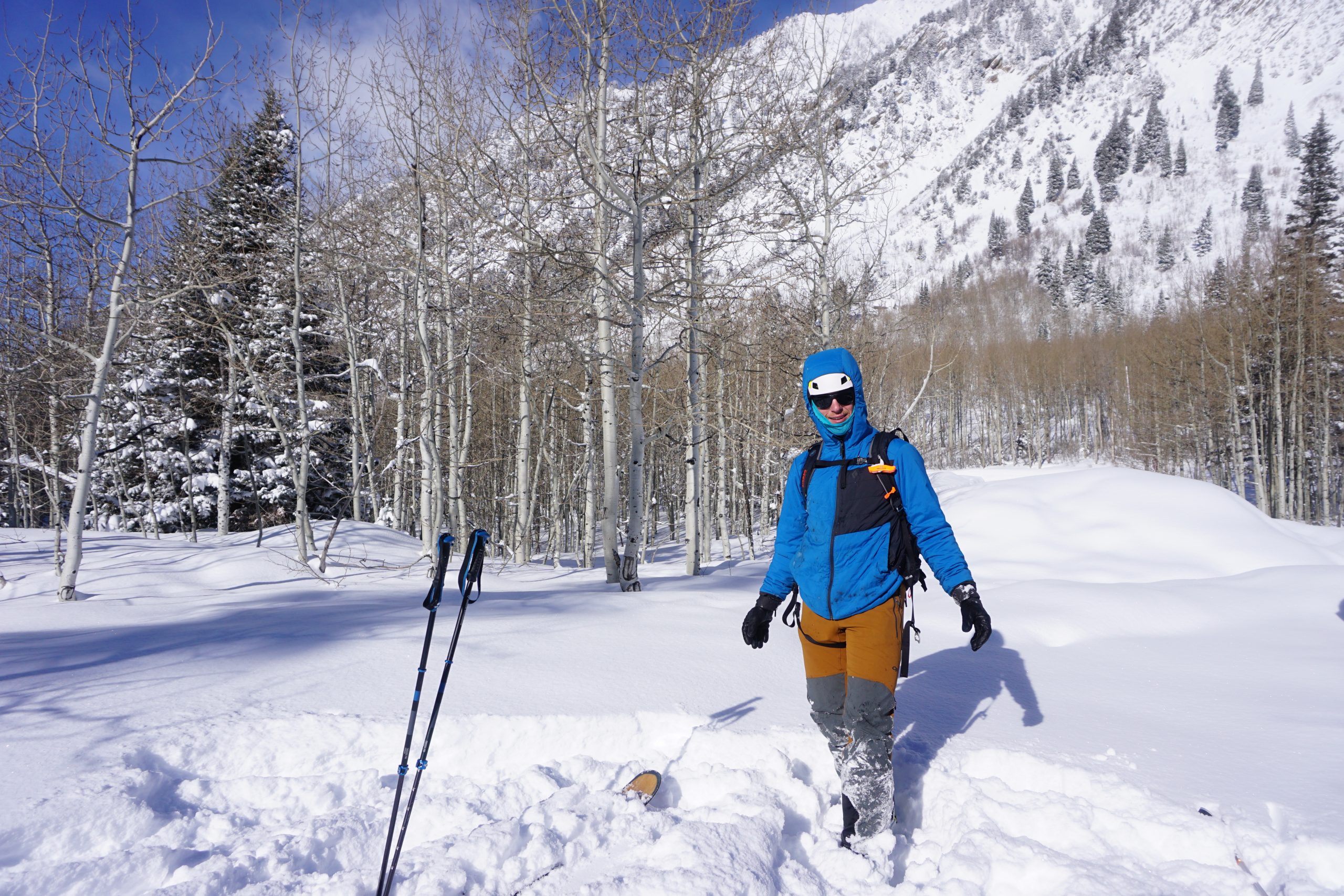 Note the overall bagginess with skins in the front pockets.

This extra girth was nice for not feeling too confined when wearing the piece over other layers while ski touring. However, skiing with skins in the main pockets, or even leaning over with a phone in the chest pocket highlighted the bagginess as those items flopped a bit. 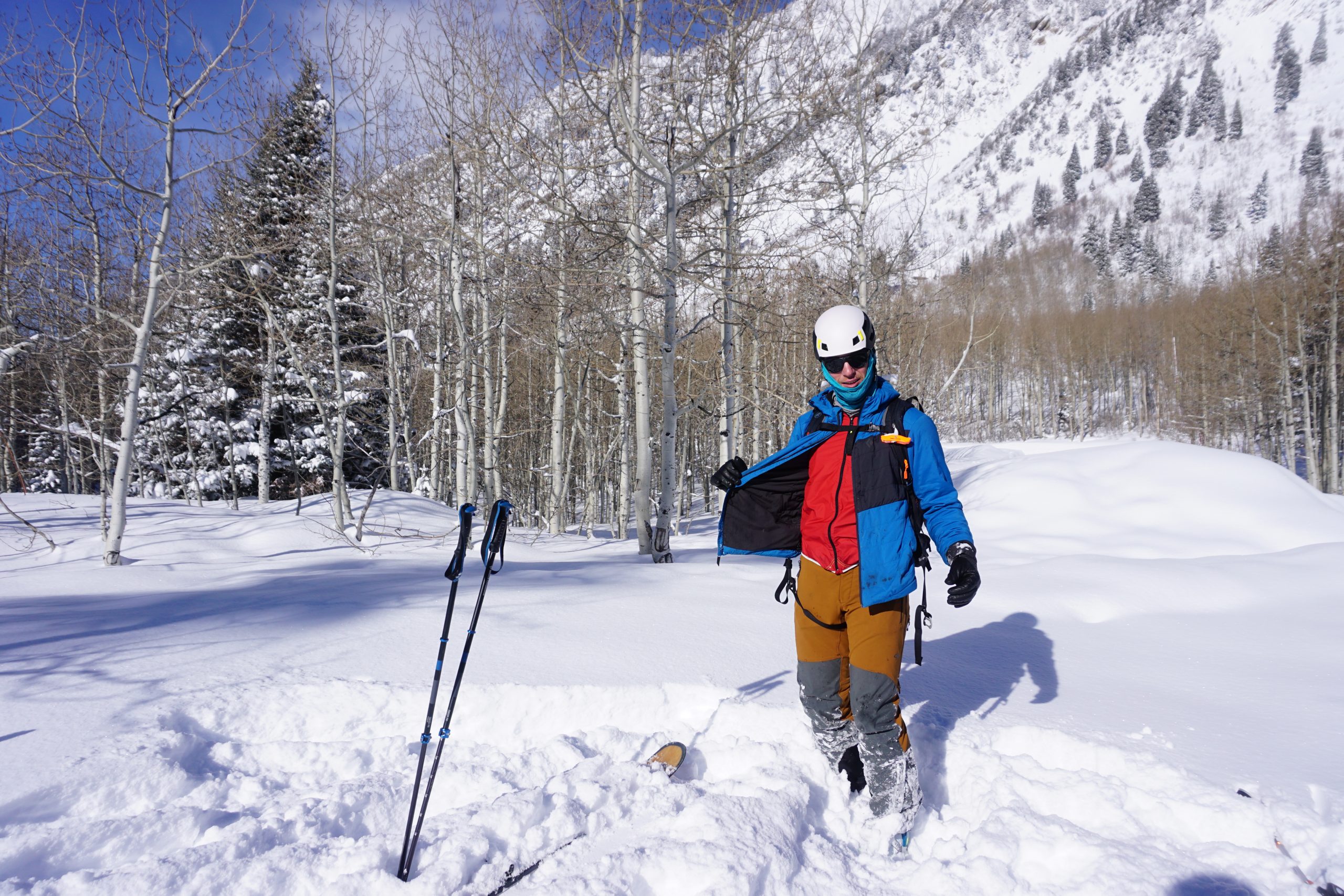 With the amount of material around the torso, the jacket can fit over several other layers.

Maybe a little too toasty?

I also found this jacket warmer than the Kor Strada Alpine mentioned above. It was borderline too warm for my fall bike commute. I’ve also used it for a few frigid December dawn patrols, and I’ve never been able to keep the jacket on for more than 20-30 minutes. I run hot, for sure, but I found it too warm for serious active movement above 15 degrees. I think this is in part because the fabric is a very effective windproof barrier. Other softshells I’ve used have felt considerably less wind-resistant, somewhat reducing their utility as a stand-alone layer.

The First Light Stretch holds its own in these sorts of circumstances, keeping the climber and skier comfortable while moving in the cold and wind. I found it hit its stride in those colder. windier conditions that other jackets in the class don’t quite meet. I did find it to be the perfect single layer to throw on for the downhill while backcountry skiing. Water-resistant enough to not get soaked by all those face shots and warm enough to finish the run toasty, even when waiting for your partner at the bottom of th descent.

I was also able to ski a few days inbounds with it, wearing a light baselayer, the First Light Stretch Hoody, and a waterproof shell. When I was skiing vigorously in moderate weather, skating on the flats and skiing right onto the chair (thanks, Alta), it felt like too much. Within an hour or two, it was sticky with sweat. On slower days, either teaching or skiing more socially, it was a great, warm layer, with an outstanding high-zip collar. 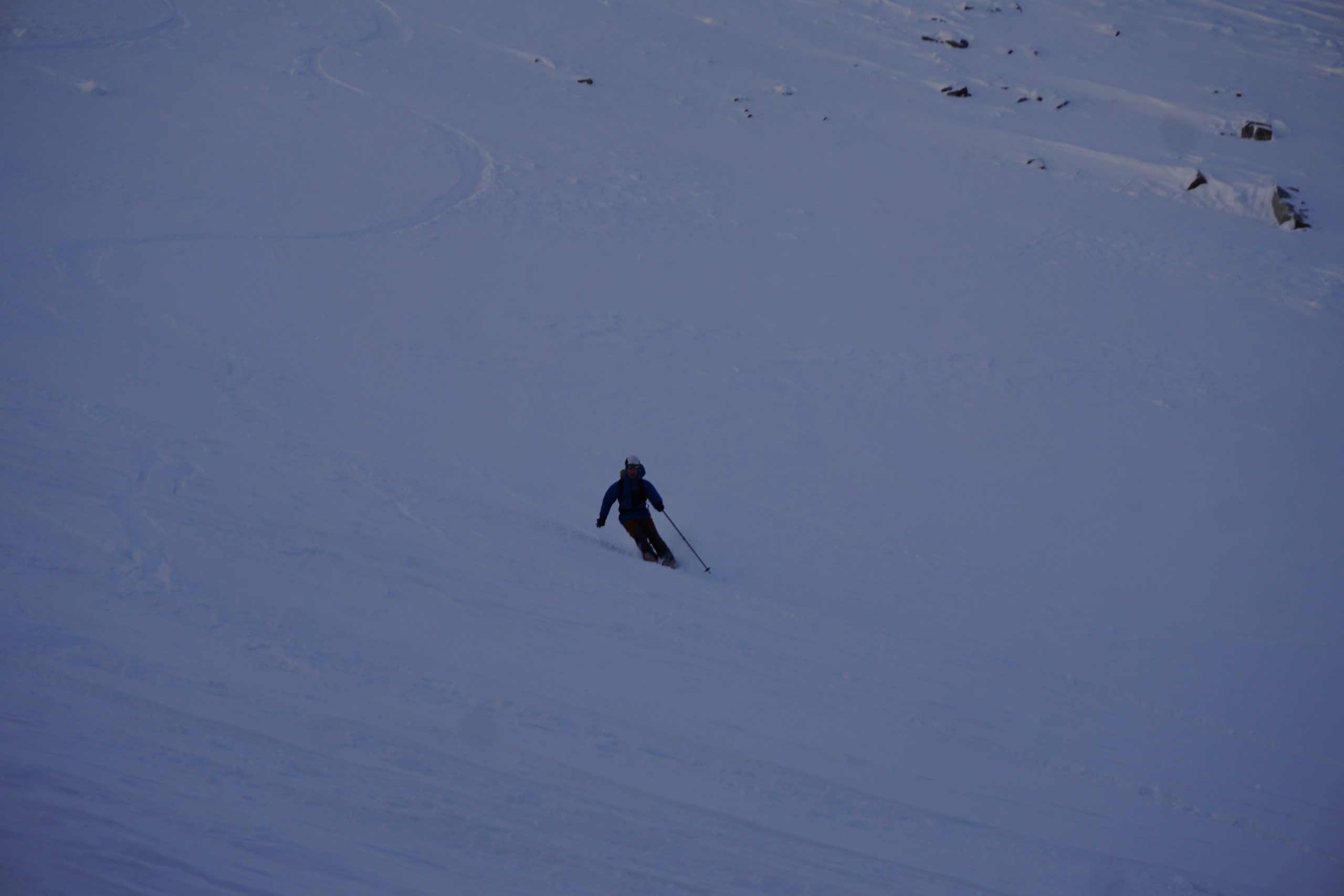 No sweat under there!

Pocket Zippers Could be Better

My biggest beef, by far, with this jacket are the pocket zippers. They require mandatory two-hand both eyes manipulation. While I appreciate that the pockets and main zip are all shielded, that softer material is perfect zipper-snag fodder. Even with my full attention, the zippers rarely reached their final destination on the first try. The dark, small, low-profile zipper pulls on the hand pockets made it shockingly challenging to move the zipper with anything thicker than glove liners. Those two factors together made the jacket kind of infurating, especially for backcountry skiing and climbing, where I often use the pockets but don’t have the time to stop, find the zipper pull, fumble and curse.

As silly as it sounds, this had me putting the First Light Stretch Hoody down in favor of other jackets that might not have been as warm or fit as appropriately. The zippers were bad. If I could remove the zipper shields and use bigger zipper cars (the bit that connects the teeth), I think this would be an awesome jacket. As I’ve used the jacket more, the lower pockets have gotten slightly better, but the chest pocket zipper remains almost off-limits. 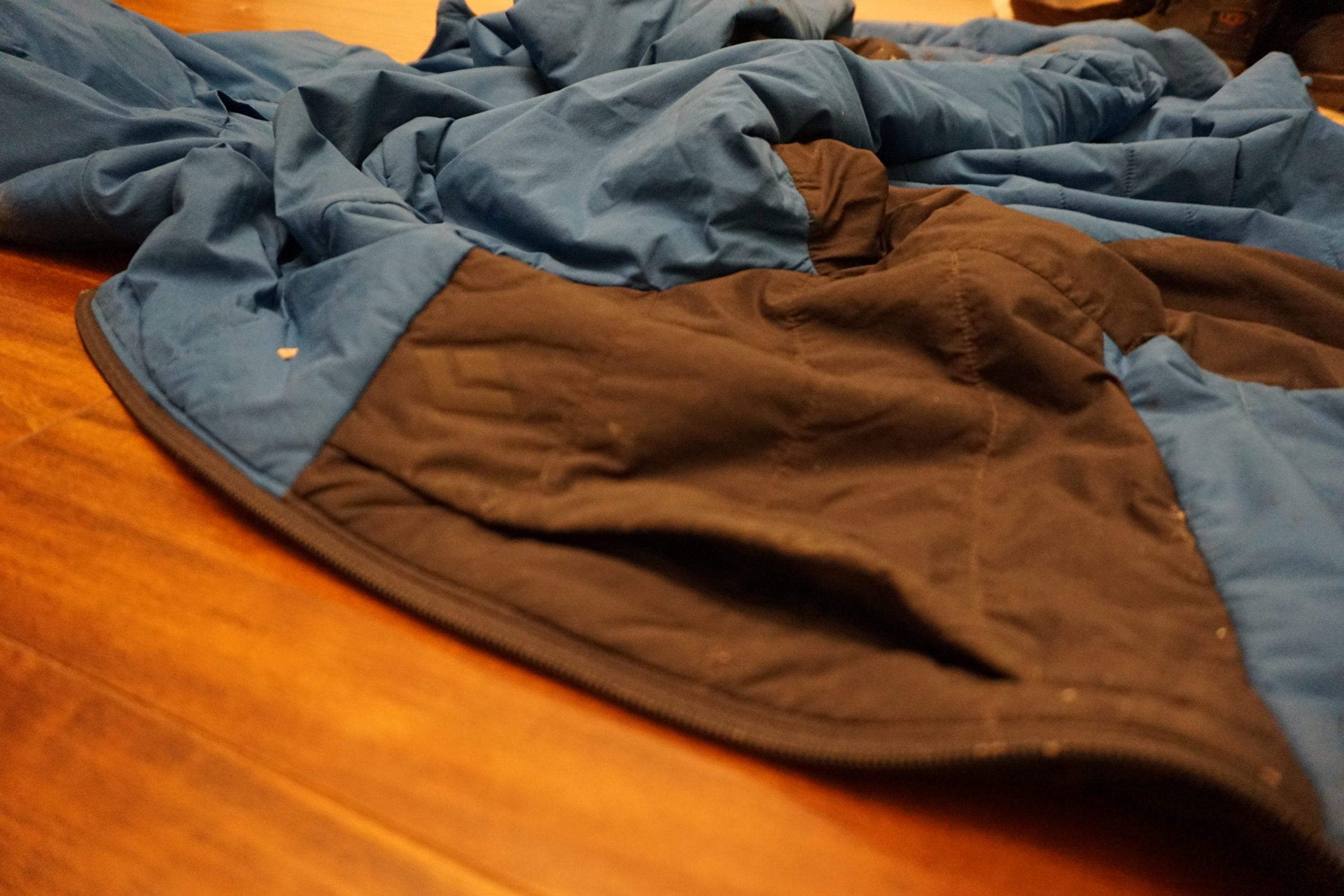 The dark hole in which the zipper can’t be found

Another minor drawback was that even out of the box, the jacket was not particularly water-resistant. Don’t confuse DWR for waterproofing, but with anything more than a light precipitation rate, the jacket began to saturate. It did, granted, take longer than I expected for the jacket to be ‘wet’ or for me to feel it, but barring July/August day trips in the Sierra or the desert, I would not depend on this as a weather-resistant piece to keep me dry if the weather turned south.

This piece is a mixed bag. Unlike most other jackets in the category, it’s made of a single facing material, and surprisingly toasty and wind resistant. As it’s a little looser around the torso, it would work well as the outer layer for moving on very cold days or north faces. I found it a tad warm for moving during most of my Utah winter endeavors, but it was a great jacket for light breaks. The downside of its use for that was the zippers! They made quick transitions with this jacket frustrating, as zipping and unzipping took a ridiculous amount of time. If you run cold, or you spend a lot of time in snowy wind this could be a great active layer. If you’re sweaty like me, use it as a heat-retention piece on breaks.