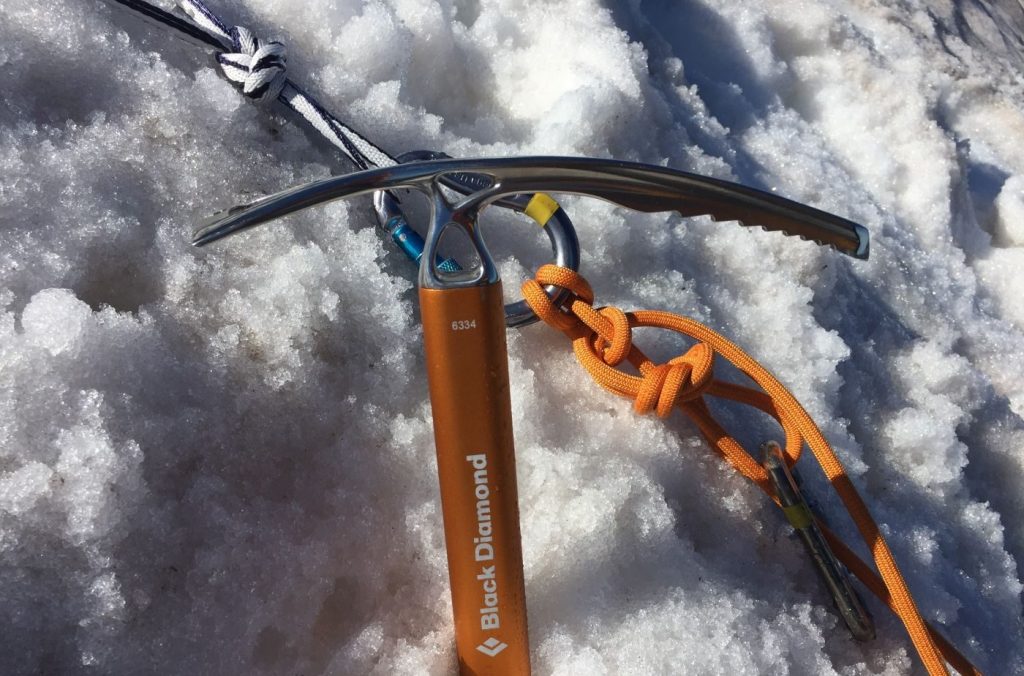 Ice axes come in all shapes and sizes these days. You can get a straight shaft or a bent one; fixed picks or interchangeable ones; spikes that are long, spikes that a short; shafts that are hollow, shafts that are rated to hold a fall. They can be as big and burly as you’d like, or as trim and dainty as you dare. Falling towards the latter end of that spectrum is the Black Diamond Raven Ultra Ice Axe, a lightweight tool for speedy alpine missions.

Buying an ice axe that’s optimized to be light weight is a funny development in the world of climbing. As gear gets lighter and expeditions get faster, it puts a fresh lens onto the eternal question of balancing performance, weight and cost. The Raven Ultra is a piolet that priotizes weight savings and doesn’t break the bank, but its self-arrest performance and spike quality don’t hold up to other contenders. So it’s important to understand, from the outset, what the Raven Ultra is designed for – ultralight missions where the terrain is marginal for requiring an ice axe or ski mountaineers who want the added safety.

So, for example, here are a couple of the trips that I took the Raven Ultra on. It came with me on a trip to explore the remains of the ice caves on Mt. Hood’s Sandy Glacier; perfect, because the terrain stays moderate up until the caves. I also took the Raven on a climbing trip to Lion’s Head in the Selkirks, thinking that I’d encounter steep snow on the approach. I did not, but at least I was only carrying 12oz of ice axe. Another example was my third trip to Glacier Peak in August; the approach is a brutal 15 mile slog and the actual glacier climb stays moderate (except for a weird, and relatively new, bergschrund crossing). Who wants to carry a heavy-duty ice axe for 15 miles of approaching? Not me.

Here are some examples of trips the Raven Ultra would not be great on: Mt. Rainier’s DC route. Partly because the route gets plenty steep around 13,500 feet or so, and partly because most of the season involves a lot of trotting up rock on the Clever; using the Raven Ultra on rock for long periods of time will destroy the spike. Another marginal option would be something like the Leuthold Couloir on Hood; it’s fairly steep and, if things are icy, the Raven Ultra’s spike won’t cut it.

Anyway, there are some examples. In reality you can heed or ignore that advice to your heart’s content, but it’s a good representation of what the Raven Ultra is intended for and what it’s not. Ideally, you’ll have more than one piolet in your arsenal and will be able to deploy either more technical ones or stouter ones depending on the route and conditions. Now let’s look specifically at three qualities: design, weight and self-arrest performance.

In terms of design, the Raven Ultra has some impressive points. The spike is integrated into the aluminum shaft, so there’s no extra screws, glues or plastic joiners. It’s a very clean design, and there’s a hole large enough to accept a chunky Black Diamond RockLock. The spike design has two key limitations, though; for one it’s an angle cut on the shaft rather than a true point, which means that it can slide out from underneath you if you’re using it in cane position without strong purchase. Additionally, the spike design dulls easily – if you care about the longevity of the spike, don’t take this on routes that have long stretches of rock or pumice walking.

I am a longtime fan of the head design on the Raven family. They carry very well and are much more comfortable than every other head I’ve tried. The reason is partly that it’s a single piece (no welds) and all of the edges are rounded. The comfort can actually be a significant factor in helping you maintain a good grip on the head, too; it’s easier to keep your fingers tightly twined around a comfortable head than one with lots of poky edges.

The Raven Ultra arrives from the factory with a pick that’s actually quite sharp; in my testing, I found that the Raven Ultra’s head does a good job at penetrating harder ice but fell short compared to heavier axes that had more Oomph in the swing. The adze design is sufficient but not ideal for chopping steps, but don’t take this ice axe on a trip where you need to chop steps!

The Raven Ultra is CEN-B certified, so you can throw it into an improvised anchor if you need to. I found that the shaft doesn’t slide into the snow as well as I’d like it to, partly because the pick just isn’t as pointy as other designs. There’s also a carabiner hole at the top of the shaft for use as a picket. If you really wanted, you could use the shaft as an improvised deadman.

In terms of weight, the Raven Ultra is a great contender. There are lighter piolets (the Camp Corsa series can be as light as 7.4oz!!) but that’s truly extreme. Another piolet that beats out the Raven Ultra is the Petzl Glacier Literide at at 11.2oz, but the Raven Ultra truly is a contender for best ice axe in terms of lightweight-ness to overall performance; it’s right down there in terms of shaving off ounces. And, it has to be said, every ounce that comes off the product means that it’s a little tougher to swing it into firm ice or get momentum with the adze whilst chopping a tent platform or that sort of thing.

Finally, a bit about self-arrest performance. It can be said from the outset that the Raven Ultra will not perform as well as other piolets that have a bent shaft or a longer shaft; both of those traits lead to increased leverage from your body to the pick in the snow. I found that the Raven Ultra’s self-arrest performance was modest, largely because I felt like the shaft was too short to get the leverage that I’d like. However the pick, quite sharp out of the gate, could usually get good purchase on moderately firm glacial ice. A bent shaft could increase its self-arrest performance, but it would also become slightly less well-adapted to be used as a slam for anchors and belaying.

The Black Diamond Raven Ultra is a good piolet, so long as you don’t push it past its comfort zone. It’s not intended for really heavy duty use, or steep terrain with high chances of falling to bad consequences. However, there are many North Cascades destinations where it’s an ideal companion and anyone looking to shed ounces while still carrying a reliable ice axe can find a good companion in the Raven Ultra.