Cycling multitools come in all shapes and sizes. Objectively, some shapes and sizes are better than others – it’s got to be light, but strong; versatile, but also functional. It’s a tricky balance, but Blackburn has put an offering on the table. It’s called the Grid 13 Multiool. 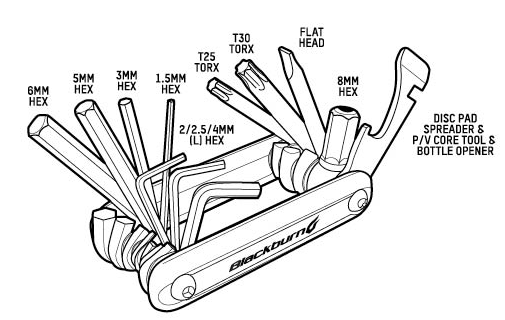 Carrying a multitool is a no-brainer. If you’re hard on your bicycles, things are bound to go wrong. This fact was rammed home to me as I tested the Grid 13, and it seemed to come in handy on virtually every trail ride I’ve taken since throwing it into my pack.

The tool packs thirteen commonly used bicycling tools into a 145g package with an all-metal, durable design. It includes all of the common hex sizes, T25 and T30 torx heads and a disc brake spreader. Conveniently, the spreader also has a slot for tightening or removing Presta valve cores – and a tooth for taking off bottle caps. No doubt that’ll come in handy.

Perhaps just as important as the individual tools is the placement and angle of each tool. Most of my previous tools have been normal straight wrenches, which is fine, but Blackburn wanted to make things a little easier on riders. So, the 2, 2.5 and 4mm heads are bent into an L shape. These are often used on cockpit components, and you can imagine that this is a lifesaver when you’re adjusting a finicky saddle clamp with a tough angle. It also allows you to put down quite a bit more torque on the bolts, which may be a good or bad thing since it raises the risk of stripping heads. I personally like the design, but I lent it to a friend who’s been using more conventional multitools since before the dawn of time and he found it perplexing. I would call him an anomaly – it’s a useful design.

The tools are sandwiched in between two attractive cast Blackburn-labeled finishing plates. If the tool ever starts to loosen up, it’s an easy matter to pop two 2.5mm Hex heads into the retaining bolts and tighten them up. One tool that some riders might miss is a chain tool. Admittedly, it’s a helpful addition, but in some ways the pocket chain tool is becoming obsolete with finnicky 10-11 speed chains. I could repair them functionally on my 9 speed setup, but getting a good repaid that doesn’t damage the chain on more delicate 10-11 speed chains is tough.

Like I said, I’ve already had lots of cause to make use of the tool. The same friend managed to fudge his brake calipers during a flat repair, and the spreader came in handy then. My twist-on tube chuck constantly tries to wrestle valve heads out of their place, and so the core tool regularly came in helpful. This is just how things work on a mountain bike – you ride hard, things break, and you fix them. 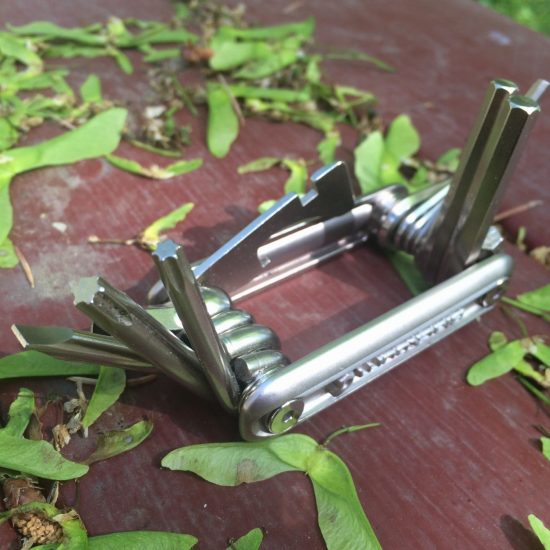 Lastly, a word about weight. The Blackburn Grid 13 is solid, but it’s not too much of a heavyweight. By comparison, the Crank Brothers Multi-10 clocks in around 180g. On the other hand, the Lezyne CRV 12 multitool clocks in at 115g. The Blackburn offering comes in comfortably in the middle at 145g.

The Grid 13 is a durable tool that’s flexible enough to take care of most bike issues that happen away from your garage. It’s definitely built to last, which is a relief in a world of increasingly disposable products.