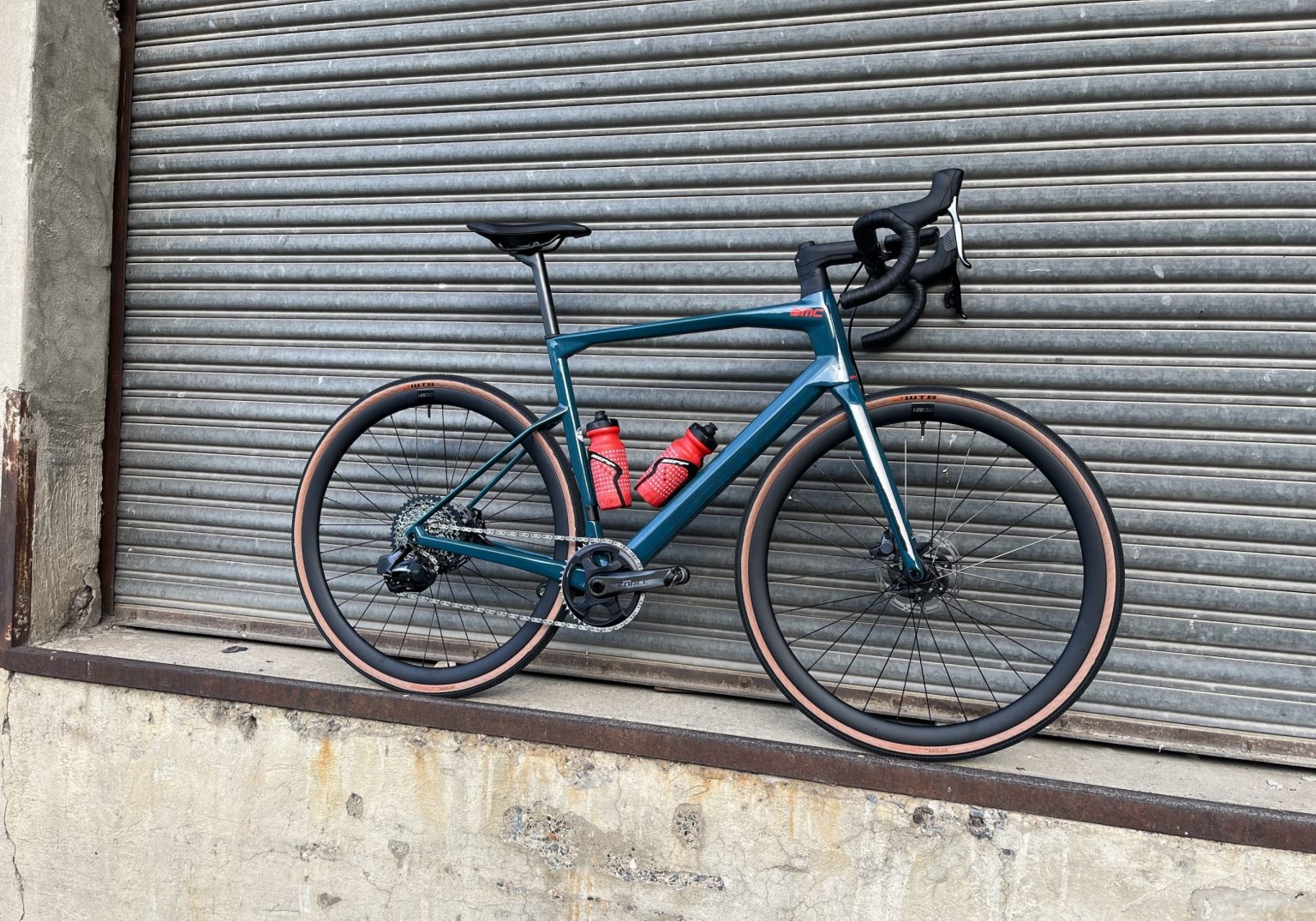 Never a slouch, the BMC Roadmachine is on the racy side of endurance and with just enough clearance to swallow bigger tires, the Roadmachine X ONE model aims to take 1x to the road and light gravel. Though clearly not a “gravel bike,” the Roadmachine X can tackle the worst roads out there and dabble in some dirt tracks.

Why the Roadmachine X?

Since BMC has the standard Roadmachine endurance bike and the capable URS gravel bike, just where does the Roadmachine X fit into their lineup? Should you glance at the Roadmachine X, you may think it’s a race-oriented gravel bike, but digging deeper, that’s not the case. So, what is it? The answer to that is nuanced, but I’d call it a 1x road bike that’s ready for unexpected detours. It rides and performs like the venerable Roadmachine, but with some drivetrain simplicity and all-weather capability.

With that, if you want the ability to dodge traffic and head onto gravel shoulders, ride choppy roads or hit the occasional champagne Colorado gravel, the Roadmachine X is a great platform to settle into. By maxing out the tire clearance, the Roadmachine X ends up being a predictable riding partner that can handle the unexpected better than the regular Roadmachine and many other road bikes on the market.

Back in 2018, the UCI Continental Team, Aqua Blue Sport competed on the 3T Strada with a 1x drivetrain. While 3T co-owner, Gerard Vroomen was and is still bullish on 1x for road, it comes with a mixed reception across the industry in general. Their team’s experience did wag the dog and led 3T to release the Strada Due, which accepts a front derailleur. That being said, since that time, SRAM and Campagnolo have both launched 12 and 13-speed drivetrains with tighter gearing that are more suitable for road bikes.

And, in 2021, SRAM further expanded their 12-speed lineup with the introduction of their gravel-focused Red, Force and Rival eTap XPLR AXS drivetrains, which paved the way for the BMC Roadmachine X. Though I’m a fan of the XPLR groupset for gravel bikes, this is the first time I’ve tested it on a road bike and I was excited to give it a go.

Outfitted with 10-44t 12-speed cassette and a 44T single chainring, the Roadmachine X ONE gets that coveted 1:1 gear ratio with smaller gear jumps that can capably replace that sometimes-pesky front derailleur. Smartly, BMC chose to go full SRAM Force eTap AXS for a consistent look and reliable performance.

Rounding out the rest of the build around the RMX frame includes the Fizik Terra Argo X3 gravel saddle, WTB Expanse 32 tires, the BMC CRD-321 carbon wheelset and a very road-shaped set of alloy drop bars (which were swapped out halfway through testing).

With a 586 stack and 390 reach, the Roadmachine X’s frame doesn’t seem very aggressive on paper, but I do require the full 25mm spacer to achieve my preferred fit. The culprit is really the -12 degree ICS1 stem, which is twice as steep as your typical -6 degree. Due to that, I did ride with an additional 10mm spacer for a time until I realized I could remove it and still get my fit. In the end that 10mm change made a significant difference in the bike’s handling and had me lamenting not doing it sooner. External routing for the win!

Is it only a road bike?

Again, the Roadmachine X does look more like a gravel bike than a road bike — with those tan-wall tires and a 1x drivetrain — but the reality is it remains a versatile endurance bike that can hit the dirt on occasion. My goal was to figure out just how much of a road and gravel bike it really is. But, before all that, I wanted to make sure it had road chops.

As a Swiss brand, BMC is known for precision and impeccable engineering. With that Swiss-level of care, the Roadmachine X can certainly play nicely as a dedicated road bike. To test that, I’ve ridden it on every local road route, including the classic Alpine Loop, and on soggy coastal roads in the Pacific Northwest.

First, I’ll cover the basic ride feel and handling. At 17.7 lb., the Roadmachine X ONE feels confident and responsive without feeling sluggish. It’s not as playful as other bikes, but you can certainly maneuver it around to your heart’s content. That said, it falls short of the nimbleness and playfulness of the best pure road bikes. It’s no slouch, and it provides a good road feel, but it’s just not as whiptastic as something like the Specialized Venge.

The combination of the Tuned Compliance Concept with 32c tubeless tires at 55/60psi results in a firm, composed ride. It’s not as cushy as the best endurance bikes, so don’t expect to match the feel of a Specialized Roubaix or Trek Domane, but it can roll through rough terrain and mute much of the kickback except the most gnarly tarmac. My lower back will attest to the fact that this is definitely not a gravel bike. You’ll get thrown around in gravel and your body feels every bump.

Surprisingly, the wide file treads of the WTB Expanse 32 and the CRD-321 carbon wheelset work together nicely and roll much better than I expected. In my standard roll-to-stop test, they come to a stop about on par with most mid-range wheel/tire combinations. Frankly, I love seeing that kind of girth underfoot as it adds confidence and allows me to drop onto an occasional gravel shoulder to escape passing semi trucks.

Roadie purists may scoff (only because their frames max out at 28mm), but 32c road tires are where it’s at in my book. In addition to the ability to veer off road just a little, the all-weather capability of the Expanse 32’s is fantastic. Snaking through the wet, misty coastal roads of Cape Disappointment Stake Park and getting caught in Utah’s summer storms, I have pushed these tires hard and they just plain grip. With zero flats or punctures, they hold air well and mount up nicely with Orange Seal tire sealant.

There’s no getting past the fact that the Roadmachine X lacks aerodynamic shapes. As such, don’t expect any aero gains here. In addition, while the XPLR drivetrain does a good job as a 2x replacement, it still lacks the fine-tuned gearing choices a front derailleur provides. So, while you can push it hard on flat or rolling terrain, it will simply not perform to the level of a bike with aero touches and more fine-tuned gear ratios.

Comparing my performance on one particular segment outside Chinook, WA, I was pushing more watts (242 vs. 237 watts) over the 6 miles at a slower pace (20.2 vs. 21.4 mph) with the Roadmachine X. Not having the proper gear and a lack of aerodynamics adds up to losing over over a minute — even though I’m actually pushing more watts.

My conclusion with these results is that aerodynamics and gearing matters for sustained flat or rolling efforts. This will also come into play should you hit up your local fast group ride where you may feel caught either under or over-geared. I ride solo pretty much exclusively, so I compete with my own fitness level and Strava Live Segments. For me, that typically means I’m okay with the gearing concessions and have truly appreciated the simplicity of the XPLR drivetrain.

When the road tilts upward and I settle into a nice cadence, the Roadmachine X climbs well. It performs equally as fast and efficient as the Open UPPER with a set of fast road wheels. Looking over a few comparison segments, there’s one that looks almost identical in terms of watts, heart rate and effort over a 5 mile climb that gains almost 1000 ft.

Initially, I had concerns about the 44/44 combo on the steepest climbs, but I have found that I can pedal my way through most climbs in the 38t cog while keeping the 44t as a 1:1 bailout option. When the road gets into 8-11% territory, I can alternate sitting in the 44t and standing in the 38t to mix things up. I’ll note that on the steepest pitches, my left knee occasionally taps the rear brake line. Still, climbing feels efficient overall and I’m pretty satisfied with how well it tackles the terrain.

Having a lower stack does play a positive part in climbing as well as descending. After dropping that 10mm spacer, I felt like the front end was more cohesive when standing. That was even more apparent with the wider Zipp Service Course SL-70 XPLR 44cm drop bars installed (which I changed to about halfway through testing).

When it comes to descending, the stock bars end up feeling a little off due to the lack of flare in the drops. It seems kind of odd to not have any noticeable flare. Comfort, control and responsiveness was just better with the wider, mildly-flared bars.

Stability is always a top concern when descending at 45 mph. Again, the Roadmachine isn’t going to handle like the Teammachine at speed, and that’s a good thing. You’ll find it to be calm and collected with the ability to easily maneuver around potholes, manhole covers and other obstacles in the road — hopping when needed. Thankfully, crosswinds haven’t blown my front wheel around and overall handling is just as it should be for this type of bike. Of course, if you can ride this bike with a slammed stem, handling will get sharper. In the highest gear, pedaling tops out at 38 mph with this 1x setup.

Note: For 2023, you’ll find updated colors and the ICS MTT Redshift stem, but everything else is identical

As a followup to the alloy version, the Roadmachine X ONE offers a lightweight, 1x road experience that seems odd on paper, but works. The full package is a capable endurance bike with a responsive ride and a little extra capability. You won’t see a ton of BMC’s out on the road, so if you want something different, this is a great option.

The BMC Roadmachine X ONE isn't a gravel bike, but it is an endurance bike with a little extra practicality via the biggest tires you can mount on a Roadmachine frame. Measured out to 33.8mm, the WTB Expanse 32's offer great handling and grip under a wide variety of conditions. And, BMC's overall package is light weight and much more capable than I believed.