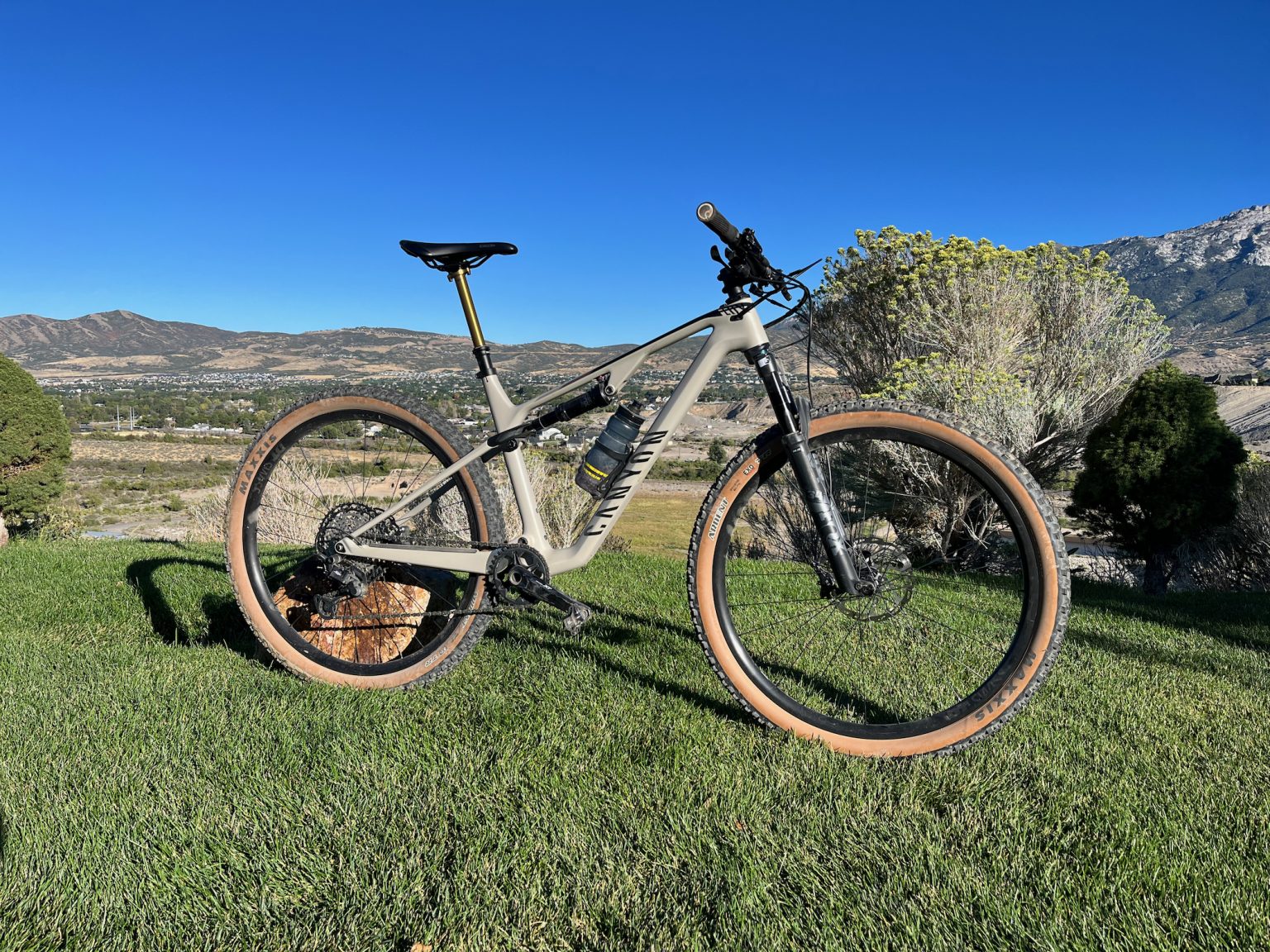 Canyon’s mountain bike lineup offers something for everyone. And, they have been riffing on their Spectral and Lux models recently — splitting their XC and enduro models into their own niches in the market. On test has been the recently-introduced Canyon Lux Trail, which aims to be a downcountry variant of their World Cup XC race bike. With a proven and fast foundation, the Lux Trail carries with it expectations of being a fast climber, but how fun would it be when the trails get rough?

It’s a formula used elsewhere for years — tweak the linkage to eke out a little more travel, then put a longer-travel fork up front. At first glance, you might think that’s all that Canyon has done with the Lux Trail, but the front triangle is actually updated from the standard Lux XC racer to add reach and provide a slacker, more trail-worthy head angle. In all, you get a more capable bike overall than the racy Lux model. With 110mm travel in the rear and 120mm in the front, the Lux Trail does look to provide the proper amount of squish for all-day adventures while still remaining fast and furious for XC racing or fast laps with the crew.

The term “downcountry” has now been adopted in the mountain bike world as a bike that can still be a capable XC racer, but with more chops to handle chunky, technical terrain. In my mind, bikes in this category should climb until your lungs explode and descend with the confidence of a bike that has much more squish. Am I asking too much? I don’t think so. Having recently wrapped up a long-term review of the Trek Top Fuel 9.9 AXS, I think those expectations are valid and are the benchmark I’m using to test the Canyon Lux Trail CF 7 against. But, you could get two of Lux CF 7’s for the price of the Top Fuel, so we’ll take that into consideration.

For $5299, you’re getting a carbon frame and lightweight DT Swiss carbon wheels. Most bikes in this price range still have alloy hoops, so that consumer-direct model works in your favor. At 26.8 lbs (medium), it’s not wicked-light, but light enough to whip around the race course and not skip a beat. The Maxxis Ardent 2.4’s are set for rowdy adventures.

With a Shimano Deore XT 12-speed groupset, you can expect reliable and fast shifting and the Fox Performance Elite shock/fork handles the squish. With a single-pivot design, you get simple and predictable suspension performance that leans more XC than trail. Note that I do have a non-standard Fox Transfer Factory dropper post due the sample arriving with the wrong dropper length.

The off-the-shelf Lux Trail CF 7 comes well-equipped for the price, but there are always compromises. These days the parts bin can be tricky and I’m not 100% sure what stem/bar it should be spec’d with (it says RaceFace online), but the included Newmen Evolution SL 760mm riser bar and 60mm stem weren’t to my liking. Nor was the Selle Italia SLS saddle. I much preferred the wider RaceFace Turbine R 35 800mm bars and a shorter Turbine R 35 50mm stem for more leverage and comfort. I also installed the Ergon SM Comp saddle, which is much more to my liking.

For starters, I set up the suspension sag based on a combination of feel and the suggested settings on the fork. For my 173 lb. weight, I started with 80 psi. front and 150 psi in the rear. On subsequent rides, I lowered the front to 70 psi. and all the way down to 130 psi. in the rear. I’ll dig into why below, but to get the proper feel, I’m running more sag than I anticipated to get the performance I was searching for. And, for my 173 lb. weight, I’ve been running the tires at 22/24 psi. front/rear.

I like to climb — on road and mountain bikes — so we’ll start there. At its heart, the Lux platform is built for efficient, responsive performance. Nixing the rear pivot and maintaining a firm suspension character, you won’t ever be doing the parking lot squish test on this bike. To further eke out even more out of the Lux Trail, Canyon has maintained the double lockout system from the XC version. Shooting straight here — I hate suspension lockouts. Suspension kinematics and modern shock designs have rendered them useless — except for that paved finish line sprint. Carrying the lockout over from the standard Lux does represent Canyon’s European roots, where lockouts still have life. In my mind, they aren’t worth the added weight, cable complexity and added cockpit real estate.

Let’s get back to the task at hand… climbing. You’d think employing a lockout on climbs would be a good thing, but in practice, it just results in harsh, uncomfortable ascending. My climbs were all done with the suspension open and flowing and the results are very encouraging. One of my benchmark climbs is called “Insert Saddle Into Colon” and features 800 ft of climbing over 2.2 miles. All previous best times were achieved on the super fast Trek Supercaliber 9.8, but the Lux Trail is the first bike to get within spitting distance of those marks. Aboard the Supercaliber, my top times were 16:35, 16:51 and 16:53 and my fastest time on the Lux trail is 17:15. That’s impressive considering the Lux Trail is more than two pounds heavier and has slower-rolling tires.

When climbing on technical terrain, the Lux Trail climbs straight and true. I can push my weight forward enough to maintain steering precision — even with the shorter stem and longer bars I’ve changed to. Traction is maintained very well when seated or standing. Much of this is due to the firm suspension feel as the rear tire digs in and propels you forward. I feel good about the climbing ability here and you will too.

What goes up must come down, eventually. As mentioned, downcountry bikes should descend with a feeling that you’re getting more travel than the specs would suggest. With only 110mm rear travel, you’re going to feel as if you’re getting less travel than advertised. Nobody will ever call this bike “squishy” unless you’ve exclusively ridden hardtails. As mentioned, I started out with suspension sag about where I’d expect it to be and the results were lackluster. The bike felt like a hardtail and disjointed between the front and rear. It honestly felt like an inchworm where the fork would compress and the shock wouldn’t, so things just felt wonky.

In time, I let air out of the shock until I could find that sweet spot between using all the travel while at the same time not blowing through it and bottoming-out. For me, it appears to be in the 130 psi. range. The disparity between the front and rear suspension feel is still present, but it’s minimal and I can get enough compression through swoopy corners to have fun. But, I couldn’t ever achieve that desirable “bottomless” feel. I’ve come to the conclusion that the Lux Trail just can’t shake that XC heritage — no matter what the marketing literature will tell you. It’s still fun to ride hard on descents, but it lacks the smooth suspension feel of a true downcountry rig.

With my combination of wider bars, low-ish tire pressure and lower-than-recommended shock/fork compression, I’m getting the Lux Trail as close to downcountry as I can reasonably get. But, knowing how the best downcountry bikes do perform, this one falls flat on the rowdy side of the spectrum. It can handle rough terrain, but requires more finessing and prefers to skip across the top of rough terrain instead of soaking it up. Swooping in/out of curvaceous terrain is still fun, but it lacks the chutzpah you might find on other platforms.

When riding through rolling terrain, the climbing and descending ability tends to even out. Attempting to validate that, I pushed the Lux Trail hard on a 30+ minute up-and-down loop to see how it performed. As you can see, it’s not the fastest on that circuit, but it’s still admirably fast at a only minute off the best mark set this summer on the Trek Top Fuel.

Considering the overall value provided here, it’s hard to complain about the parts spec. From top-to-bottom, the Lux Trail CF 7 is built with some of the best components you’ll find. A full Shimano XT drivetrain matched with a set of DT Swiss XRC 1700 Spline carbon wheels isn’t something you’ll find in the $5000 range. To get there, Canyon understandably employs the journeyman Fox Performance Elite fork and shock. The XT drivetrain is smooth and reliable, and the brakes have delivered confident and metered braking power on all terrain. My biggest complaint has been with the unreliable Fox Transfer dropper post, which, no matter how much tweaking I’ve done, has rarely returned all the way to the top when needed. This bike wasn’t brand new, so it’s hard to know why, but it was annoying and reduced its use to only when absolutely necessary — as opposed to the RockShox Reverb AXS Dropper, that I deployed in a abundance.

The Canyon Lux Trail CF 7 comes in at a killer price, with a killer spec and goat-like climbing ability. However, it does lack the descending chops I’d expect for a true downcountry bike. The suspension feels firm, and a little unbalanced between the front and rear. If you value climbing over descending and love a good value, the Lux Trail would be a willing companion.

As you'd expect, the long-legged Canyon Lux Trail CF 7 still exhibits much of the same traits as the Lux XC racer; namely, climbing ability. With an outstanding parts spec, this one is a killer value with DT Swiss carbon wheels and a reliable XT drivetrain, but don't get in too deep as descending isn't its strong suit. You can still have a great time on the Lux Trail, but it does lack the suspension performance I'd expect from a downcountry bike.