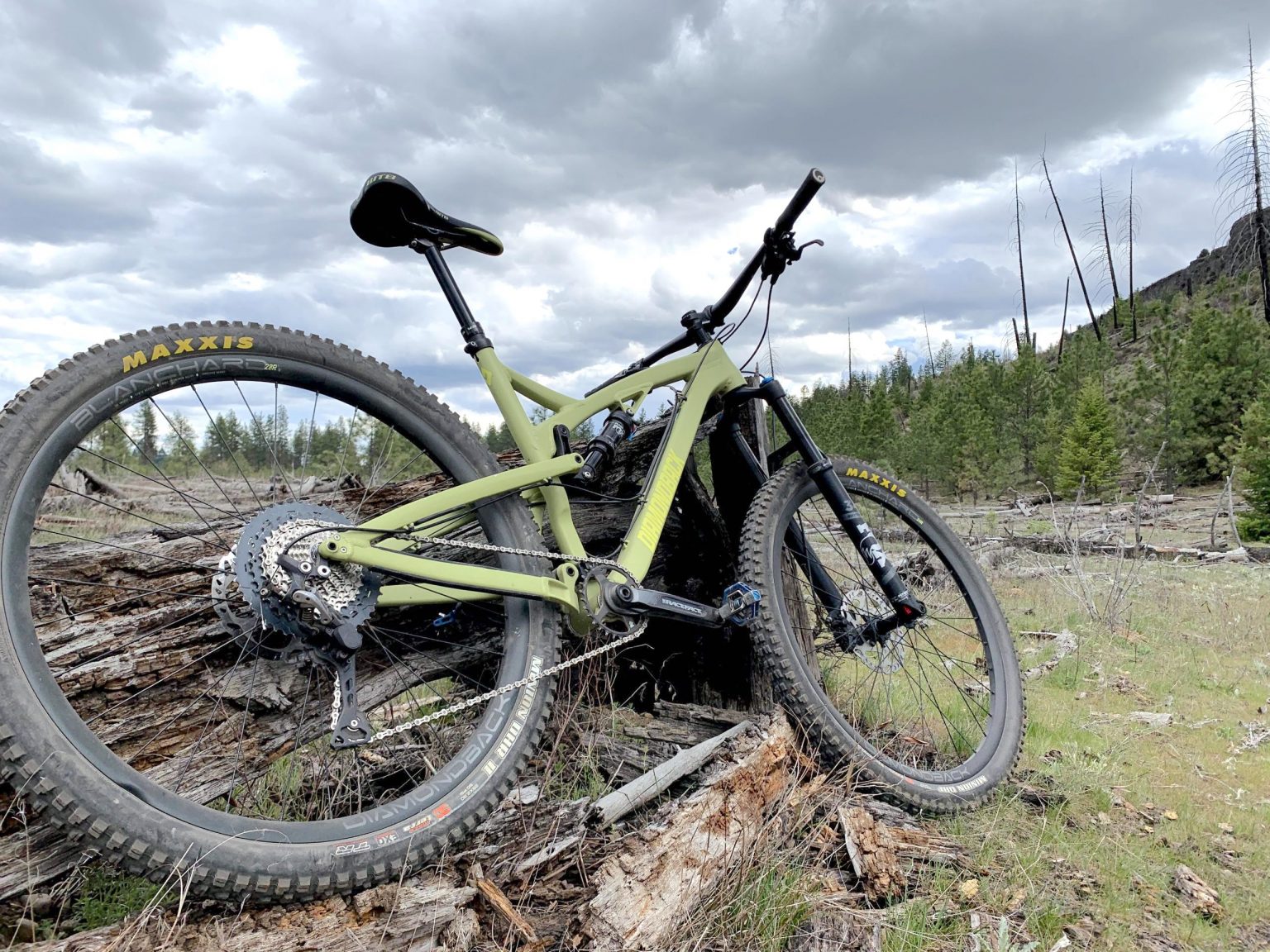 Coming off the heels of my review of the Diamondback Sync’r, I was all ready to love another Diamondback bike. My first mountain bike was a Diamondback, and I’ve continued to enjoy the brand for the mix of value and performance they offer. That lineage is continued with the Diamondback Release 29 2. It’s a high-rolling trail bike that comes in underneath $3k and has the features you’re looking for.

The Release 29 2 is the mid-level offering in the Release 29 lineup, and in classic Diamondback style it’s a mix of some high-performing parts with more budget-minded and in-house things to balance price and performance. For example, there’s a shiny Fox Rhythm 34 140mm fork with their GRIP dampener and 3-position adjuster. There’s also a nice WTB saddle and the really well-respected combo of the Maxxis Minion DHF and DHR providing grip and slinging mud. But there are also a lot of in-house Diamondback parts, like the stem, bars and wheels. We’ll talk a bit more about this later.

In terms of geometry, the Release 29 is a moderate trail bike that wants to pedal nicely without holding you back on the downhill. I tested a Large frame and there’s 67.7º head tube angle and a 73º seat tube angle. Reach is 449mm, the wheelbase is 1185mm and the chainstay length is 446mm (which is consistent across all sizes). If you go by ‘averages‘ for 29er bikes, you might notice that the chainstay is a little bit longer and that’s a nod to the bike’s overall feeling of stability, especially when you’re moving fast. Interestingly, the wheelbase is actually shorter than the average (1200mm) and perhaps that’s why the bike still feels decently whippy. Additionally, that 73º seat tube angle is a boon for climbing, as it hangs your butt out over the rear wheel to keep the traction on.

Next, suspension. We have a Fox DPS shock with a 3-position damper and rebounds adjust, which dominates the big triangle and leaves no room for a water bottle mount. The whole idea with the Level Link suspension is to balance climbing and descending performance, specifically having a shorter (130mm) travel distance that still feels floaty. It’s a short-link, four-bar design that is designed to separate the drivetrain forces from the suspension. One thing about this design is that it’s really important to set sag properly for your riding weight; the Level Link’s ‘neutral’ is mid-stroke and it’s pretty sensitive to that. Set your sag, otherwise it’ll want to catapult you forward OR you’ll just lose all your energy trying to pedal.

While climbing, the bike is really responsive and I felt like that was one of its biggest strengths. I could apply really consistent weight to the rear wheel, and with that, the front end tracked well for a squishy 29er. Credit goes to the Level Link suspension — it’s a really efficient climbing platform. There’s a soft lockout setting on the shock, but even with that left open you don’t feel like you’re losing a ton of energy to pedal bob. The bike is a bit heavy, so it needs he boost that Level Link provides and the result is a bike that climbs better than plenty of lighter bikes that don’t have this type of linkage.

Despite good geometry, the bike is not very nimble on the up — it weighs just over 33 pounds, and it is held back to a degree by the cumbersome Diamondback Blanchard hoops. They’re tubeless ready but the bike comes with tubes; do what you can to reduce that rotational weight, including going tubeless. When my (used tester) bike arrived it came with a hefty dent in the rear rim, and I had to laugh because I’ve read a review of these rims that mentioned putting a dent in during testing. I didn’t dent them during my testing, but let’s agree that they are not bullet proof. Or, maybe we all need to spend a little more time on a hard tail or cyclocross bike!

Speaking of climbing, the Release 29 2 benefits from the generous range on the Shimano SLX 11-speed transmission. It’s got a 11-46T range, paired to a 30T Raceface Æffect crank. It’s a granny gear, or even a great-granny gear, for sure. That said, shifting performance from the Shimano SLX rear derailleur and shifter left me wanting more. Shifts felt imprecise and halting, even after a fresh tune. Additionally, the lever throw (which can shift up four gears at once) feels really long and can tire out your poor lil’ thumb. Are these things expected, given the bike’s more budget-friendly audience? Yes, they’re expected and forgivable, but still worth mentioning.

When you point things down hill, the bike’s 67.7º head angle and 140mm of Fox squish keep things under control. I like how well the front end tracks on the downhill. Overall, it’s a confident descender and the 130mm rear travel feels much deeper, which is a credit to the Level Link design. The Shimano M7000 hydraulic stoppers are not a strength of the bike when it comes to descending, though. They’re a two-piston design and while they do offer a lot of stopping power, there’s not a great deal of finesse there. They feel like they’re either on or they’re off, whereas a higher end brake might offer more modulation through the lever. Of course, this is only really a problem for those who use their brakes on the downhill.

A $2800 bike that comes with a dropper isn’t to be sneezed at, of course. Beneath your seat you’ll find a TranzX 125mm dropper with internal cable routing. Droppers have really transformed riders’ experiences, so I feel like they’re hard to take for granted even if they’re not perfect. The TranzX is not perfect. For one, on a capable descender like the Release 29 2, 150mm of travel would really have been better. Additionally, the lever actuation feels pretty sloppy (common to all but the best droppers) and this particular model felt like it took a lot of force to push down; maybe that’s because of the Release’s more rearward seat tube angle, but you’ll notice it.

Ok, I’ve now completed the part of the review where I talk about parts and angles in the context of going up or down. What’s it actually like to ride the Release 29 2? Honestly, it’s really fun. It is amazing how much bike Diamondback has packed into a $2800 package. I’m heading back to school in the Fall, and if I was going to spend my hard-earned dollars anywhere, it would be on this type of bike. It’s got a really good geometry and a time-tested suspension design – a modern 29er in every way.

Sure, it’s heavy, but honestly it’s a great pedaler and will just make you stronger. The bike’s a capable descender and won’t really hold you back unless you’re riding stuff that you really ought to be on a downhill bike for; and if you are riding that stuff, there’s a good chance that you knew what you were getting into taking a mid-travel 29er down that trail! But for most riders and skill levels, your ability level is going to be the limiting factor before the Release 29 is.

Also, many of my quibbles are related to particular components, and that’s just part of the territory with more affordable bikes. You can think of them as quibbles, or you can sell them to your spouse as ‘upgrade potentials.’ I’d start with the brakes personally, then consider a drivetrain upgrade. The point is, you’ve got a great platform to hang better parts on with time.

These days, there aren’t many mountain bikes being made that aren’t a lot of fun to ride. Engineers and designers have really made incredible strides. High-quality mountain bikes can still be inaccessible to many because of their high costs, and I think Diamondback deserves a lot of kudos in bringing great bikes to a wider market. Most weaknesses are in the components, and those are just begging you to upgrade them over time, anyway. The Release 29 2 is easy to recommend for its high bang-for-buck and its fun factor.

It's an easy-to-love, quality full suspension bike under $3k. These days, we can all appreciate the value that is the Release 29 2. Not only that, but it also features one of the most efficient suspension platforms available. The overall value knocks this one out of the park.