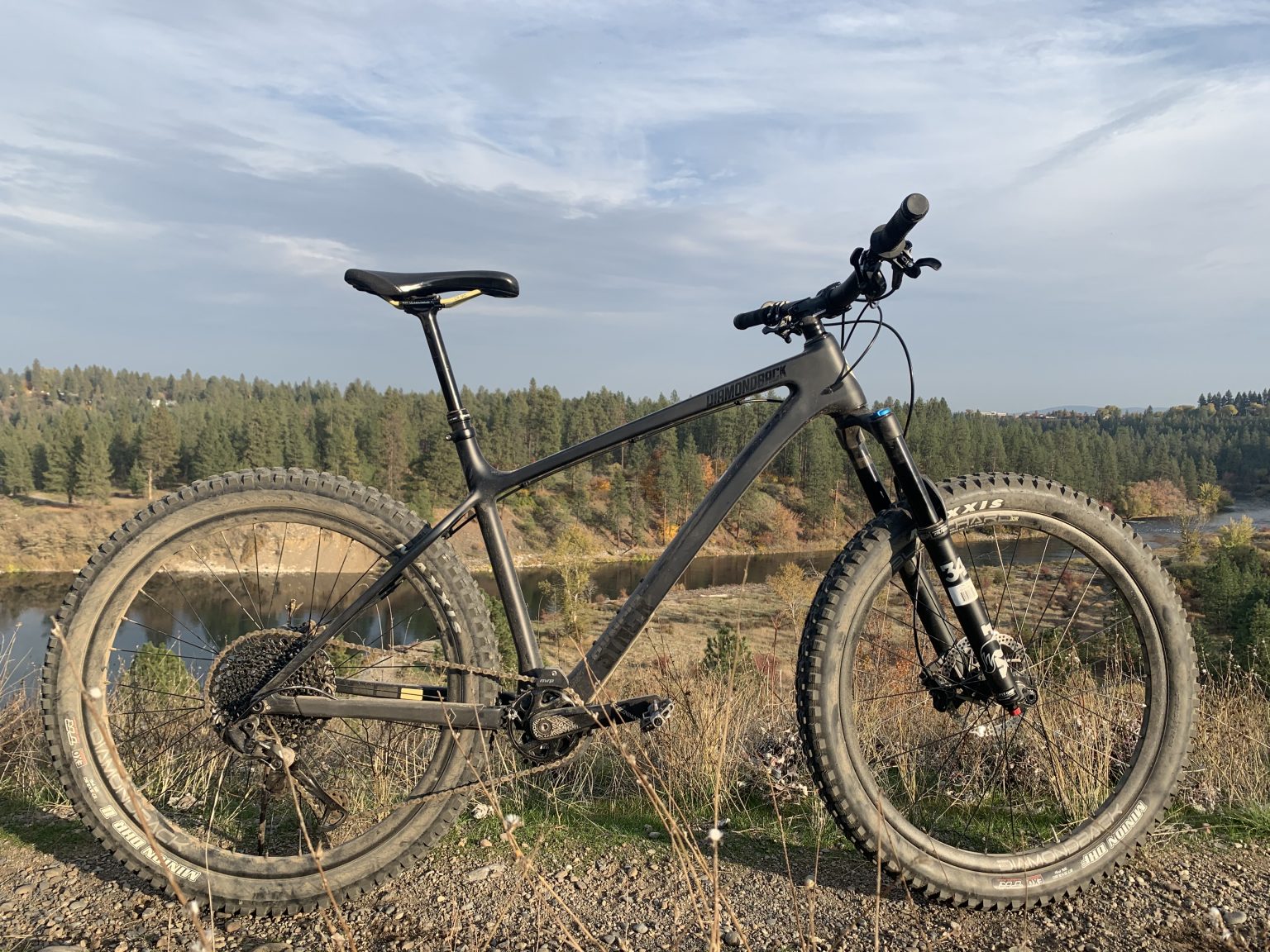 As the price of mountain bikes seems to keep climbing and climbing, some parts of the industry are pushing back against that. One thing that comes to mind is the genre of the ultra-capable hardtail, a rebuke to the uber-expensive world of carbon full-suspension bikes. One remarkably strong player in this world is the recently introduced Sync’r Carbon Hardtail from Diamondback Bicycles.

Baller on a budget

My testing ground for the Sync’r has been the rocky, rooty trails of the Pacific Northwest. It’s been a classic PNW fall with plenty of wet days and hero dirt, and it has truly been a blast testing the Sync’r. I mentioned the price point in the introduction, but there’s one thing that I have to be clear about: this bike doesn’t ride like a budget bike.

That starts, frankly, with the excellent frame and components. Perhaps the right place to start is with the monocoque carbon frame, which is super burly but also packed with high-end features. For example, there are internal cable routing options, internal dropper routing and two different water bottle mount options should you want to try something like bike packing. There are a couple of other, subtler features too – the most obvious is the access port on the bottom of the frame, which helps you access the internal routing while also future-proofing the bike to a certain extent. Who knows what tech you might want to stuff in your frame in 3-4 years.

Moving beyond the frame, what’s draped on the bike is also pretty interesting. One of the obvious things is the SRAM GX Eagle drivetrain, with a range from 10-50T driven by the 32T Eagle chainring. It’s worth noting that most bikes at this price point, especially carbon bikes, would have saved some cash here by hanging a stepped-down gruppo like SRAM NX. It feels blingy to have the top-shelf stuff on your bike, and nobody knows how much you paid. The Eagle performs so, so well – I have nothing but good things to say for the shifting and range on this bike.

It’s a natural question, too, to ask where this bike fits on the spectrum between enduro and cross country; after all, it is a carbon hardtail but one that boasts a 140mm fork and beefy 27.5+ tires. One hint about the bike’s capability is the MRP AMg chain guide. It’s an interesting choice because it’s an ‘upper only’ chain retainer which means that it’s lower friction than other models; the result is something that keeps things together when you’re charging hard, but isn’t distracting when you’re climbing or in more of an XC mode. It’s also just a little bit of nice insurance for your expensive carbon frame.

A few of the other aspects of the bike are somewhat less impressive. One of the more noticeable aspects are the brakes, which are Shimano MT501 with a 180mm front and 160mm disc. This model is a two-piston design, which means that it pinches the rotor at one spot on each side whereas a four-piston model pinches it in two places. The nice thing about the four-piston model is that you get more braking strength overall but, crucially, that strength is more precisely modulated. The two-piston model on the Sync’r are strong but it can feel like they lack nuance.

My only other significant gripe is the saddle, which feels cheap and is kinda slippery. Truth be told, I often ride in spandex cause I’m really an XC rider at heart, but even my MTB shorts felt slippery on this. Otherwise, Diamondback chose a number of in-house components which, frankly, didn’t give me any grief; these include the stem, grip and wheels. The wheels are something that could be readily upgraded by someone who wanted to squeeze all the performance out of this rig that they could, but I had no complaints for the price point. I found them to be stiff and predictable. On the old ‘Bontrager triangle’ of strong-light-cheap where you can only pick two options, these wheels are probably of the strong/cheap variety.

Moving on to the actual rider experience, I have to say that the geometry is very good in terms of producing a stable, flexible ride. I credit Diamondback with making a frame that can both climb and descend well, and feels confident doing both.

On the descent side, the frame’s moderate 66° head tube angle and a 74° seat tube angle feel sufficiently slack that, when paired to a generous 140mm fork, you can remain in control on big downhill hits. This is complemented by the enormous stability generated by the Maxxis Minion DHF 27.5×2.8″ EXO tubeless-ready folding tires, which I thought were phenomenal for grip and mud clearance. It’s worth noting, too, that the bike can accommodate 29″ wheels. Diamondback’s wider 35mm stem clamp on the 780mm alloy bars also lend stability on the downhill. Finally, I had no reason to complain about the X-Fusion Manic Dropper Post, which on my Large frame came with 150mm of travel; it was predictable and the lever was easy to use, and that’s really all I care about. Others have complained that this post has a lot of play in it, but I found mine to be super tight.

On the other side, the bike has plenty of playfulness in it on the uphill. This is aided in part by the short, asymmetrical chain stay which is 435mm on all models. This makes manuals feel effortless and it helped make the bike feel snappy as I rounded some of the tighter switchbacks on my climbing routes. The carbon frame feels super efficient when the Fox 34 Performance Float with Grip 3 POS is locked out, with the Race Face Descendant cranks feeling plenty stiff. Plus, let’s be honest, with the modern 12-speeds, you can climb just about anything. And the Sync’r Carbon does nothing to hold that back…

…with one exception – the stock tire setup is heavy. As I said, I’m a fan of the Maxxis tires, but I wish Diamondback has just shipped the bike set up tubeless. The 27.5+ tubes are heavy and compromise the ability of those beefy tires to be run at their shreddiest pressures. During my testing, I chose not to swap out for tubeless tires since that’s the stock experience that Diamondback is providing riders; however, I definitely recommend that you swab to tubeless to reap the benefits in weight savings and pressure loss.

Summing up the experience of riding a bike is always a bit tricky, but I do want to give the bike credit – it was phenomenally fun to ride. It really does climb well, and I want to give it that. However, what I really enjoyed was bombing down single track near town and in the hills and mountains. It’s an awfully-confident hardtail, and while I never hucked any 10 foot gaps I certainly felt like it was a bike that left me with plenty of room to push my comfort zone.

All in all, it’s really easy to recommend the Diamondback Sync’r Carbon because it’s such an incredible bike for the money. You don’t have to wonder if you’re getting gipped out of your hard-earned cash, so really the big question is whether or not the bike is a good fit for the type of riding you want to do. For me, I mostly do cross-country but I do like to be able to go and hit the moderately intense downhill runs at the local bike park. The Sync’r gave me the freedom to do both, and it was a blast to be riding on all types of terrain.

This bike is special because it rides like something that ought to cost a lot more, thanks especially to the high-zoot components Diamondback draped on the frame. It's a truly versatile hardtail.