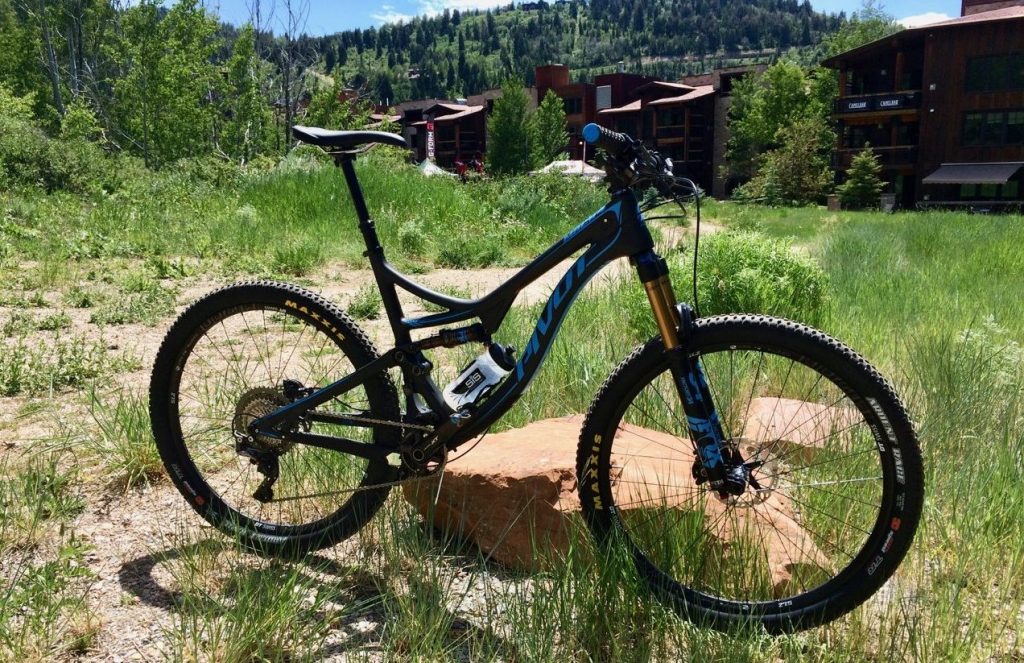 Since inception, Pivot has been building bikes around arguably the best suspension platform on the market — Dave Weagle’s DW-Link. It’s pretty safe to say that Pivot has done quite well by that platform. For the 2018 model year, the Mach 4 Carbon is getting updated with a new Boost 148 rear triangle for added stiffness and tire clearance. I was able to take the new Mach 4 out for a spin at PressCamp 2017 in Deer Valley and it was a ton of fun.

March 4 Carbon gets an updated backside

Deer Valley’s singletrack is stuff dreams are made of. With miles of dirt carpet all around, I couldn’t help but feel excited when I ducked out for an XC loop aboard the new Mach 4 Carbon. The significant changes here are in the rear triangle where Pivot has updated the bike to Boost 148 spacing to be more inline with their other offerings.

Aside from a stiffer rear end and wheel, Boost spacing allows the Mach 4 to now accommodate up to 2.6″ tires. This “middle ground” tire width delivers near-plus performance and traction without some of the negatives that come with bigger tires. While the XC racers in the crowd won’t care too much about that extra girth, they will still be stoked to have a stiffer, more responsive platform paired with the outstanding performance of the DW-Link.

Pivot’s head honcho, Chris Cocalis, is always optimizing the suspension design and loves his relationship with Dave Weagle (owner of the DW-Link patent). Together, they have come up with some amazing-riding bikes and the updated Mach 4 Carbon is certainly another one to add to that list.

Singletrack and smiles on the Mach 4 Carbon

On Deer Valley’s familiar trails, I was quickly able to get comfortable on the Mach 4 Carbon. The smoothness of the DW-Link becomes immediately apparent with the first pedal stroke. There are several good suspension platforms on the market, but the DW is one of the few in the “great” category. While seated, all trail chatter is erased. Gone. Zip. Nada. But, that chatter-elimination also allows for instant power transfer and acceleration — it truly is the Holy Grail.

My first ascents were loose and rock-strewn, but that didn’t matter as the Mach 4 made quick work of any and all climbs I encountered. As a staunch 29er fan, it is fun to hop on a 27.5″ bike to see how it compares. Initial acceleration is just a touch faster with an uncanny ability to almost come to a dead stop, remain balanced and re-point mid-climb (due to roots/rocks, I did that a few times). Where it’s also superior is when climbing off-camber switchbacks as it simply makes those kinds slow-speed turns without a fuss.

In the end, the Mach 4 Carbon spanked my previous fastest times on a couple of climbs and felt great doing so. Traction was always consistent in/out of the saddle and as I mentioned, the Mach 4 just feels balanced with the ability to re-point in a split-second as the trails demanded.

On the descents, the Mach 4 Carbon was equally awesome with predictable handling that allowed me to flow from turn-to-turn without skipping a beat. Tight corners were never a problem as I could whip this bike around with ease. Remember, this bike is not a 150mm travel enduro machine, so don’t expect it to swallow big hits, but it holds its own so much that for a guy like myself, 115mm travel is more than enough on every trail I ride.

The build tested was the Pro XT/XTR 1x flavor with a dropper post. Droppers are really nice to have as you can maneuver the bike just a touch better in/out of corners in the dropped position. The XT/XTR kit was as expected — nothing amazing, but workmanlike for years of use.

I’m a huge 29er fan and the Mach 4’s 27.5″ wheels are super-compelling. As a competitive XC bike or trail bike, the updated Mach 4 Carbon is really hard to beat. DW-Link is arguably the most refined suspension platform available today and it’s hard to argue against that after riding this rendition.

The updated Mach 4 Carbon is just plain fun. Step on it and it responds, then lay it over and it turns with the best of 'em. Without question, the DW-Link suspension platform is best-in-class and if you're looking for a short-travel XC slayer, it would be hard to look past this one.