Until this season finding a solid 4 buckle alpine touring ski boot with Dynafit binding compatibility has been a short shopping experience of 1-2 options. These few options have primarily been soft flexing boots with a less than stable ride for bigger skiers like myself. So until now I’ve cut back to 3 buckles for conserving weight, accepted the fact that my backcountry skiing experience would include a soft boot and I’ve adjusted. Thankfully those days may be coming to an end.

When it comes to shopping for alpine touring ski boots having selection should be the name of the game and thankfully this year (and in anticipation of next year) the selection of 4 buckle boots that feature Dynafit binding compatibility has exploded. One of the first boots introduced as a mid season release in this expanding category was the the Garmont Axon in early February. With the Axon, Garmont wet the appetite for many backcountry skiers who like me have switched to Dynafit but are still looking for a solid 4 buckle boot. 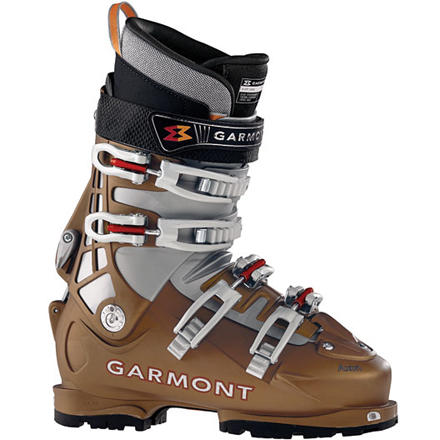 Although Garmont has quite the line up of 4 buckle boots that will hit the market next winter (boots like the Radium that is also Dynafit compatible) the Axon is the first Dynafit compatible boot in their Free Ride category that keeps the downhill ride somewhat stiff while keeping the up mostly light. Since it is Dynafit compatible it was on my radar for a couple of months prior to getting my hands on them. After putting about 20 days on these boots I’m stoked to give them a full review.

I’ve had more than a couple of people ask me if the Axon is essentially the same boot as the Garmont Endorphin but with Dynafit compatibility. Garmont describes the Axon as a mix between the Endorphin and the Adrenalin. While I haven’t skied either, the mold of the Axon appears to be almost identical with the Endorphin, with the Endorphin coming in just under a 1/4 of a pound lighter than the Axon due to some carbon fiber in the upper shell of the Endorphin.

One feature of the Axon is the anatomical toe box, seen below as a taper from the big toe side of the shell to the pinky toe side, giving it a more correct fit for the forefoot. 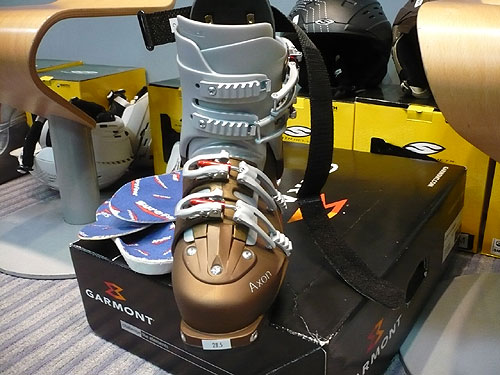 The Axon is designed as a mix between a lighter boot for skinning/hiking uphill with the stability of downhill performance. One thing that helps to accomplish this is the High G-fit thermo-moldable liner that employs a firm liner tongue similar to those found in downhill boots. Of this liner Garmont says:

The Axon’s new G-Fit liner is the most refined thermoformable liner on the market, using different thicknesses and densities of foam in key areas for the best comfort and function. Its new separately sewn sole design sits flatter inside the boot shell to get the most width and comfort out of the shell without increasing the volume.

One additional customization that they’ve added is the magnesium buckles which help to keep the boot light. Even so, the Garmont Axon is powerful enough to ski inbounds or out of bounds on just about any ski you’ve got in your quiver.

Details of the Axon include:

In the spirit of full disclosure, I’ve been a Scarpa man, having had 2 versions of the Denali (TT & XT), one season on the Matrix, and am currently on my second season skiing the Spirit 3. It was with a little apprehension that I jumped over to a Garmont, particularly given my love affair with the Scarpa liner which Jason refers to as the “burrito wrap” liner. It’s a fit I’m completely satisfied with.

After getting my liners heated and fit at The Canyons Surefoot along with a custom thotic foot-bed, the Axons were an almost perfect fit. I wear a 28.5 mondo point in the Scarpa and went with the same size in the Garmont. The boot did require a little bit of a punch to the right boot near the pinky toe which I attribute to the anatomical fit vs. the straight up symmetrical fit that the Scarpa Spirit 3 has. Once they were punched I was in heaven. The liner has packed out ever so slightly after 20 days giving me a tiny bit of extra room but it’s not enough to change the performance fit I wanted.

The liner took some getting used to coming from a Scarpa but for anyone coming from an alpine boot to the Axon this liner should be seamless. Combined with the bomber power strap the forward flex was quite stable in all but the most cut up conditions.

Since I’m on the liner, Garmont has lace loops and laces. I think they are completely lame but for the sake of testing I skied them with and then without the laces noticing no difference in performance. The only difference is that the laces are a pain in the butt and not worth it. The only time they would come in handy would be on a hut trip where you forgot your down booties.

The buckles worked well in the field. Particularly nice was the “cheater” extra buckle slot on the two upper buckles which helped to get the buckles started when cranking them down. I also found this was an optimal position when skinning as it kept the uppers loose. I’m not sure why the upper and lower buckles are opposing, although the performance was flawless.

My first two days skiing the Axon was in the side-country of The Canyons Resort where I spun multiple backcountry laps and a number of in bounds runs in order to mix it up. The first couple of times I was using the Naxo binding to have a variety of binding use. The only time the boots left me desiring a bit more forward stability was in deeper moguls and severe cut up. Since I’m 6’4″ they felt a little low on my shin, like the flex point of the upper buckle was a bit low, but this wasn’t enough of a sacrifice from my alpine boots to make me consider switching. The versatility of going in and out of bounds was well worth the slight sacrifice. 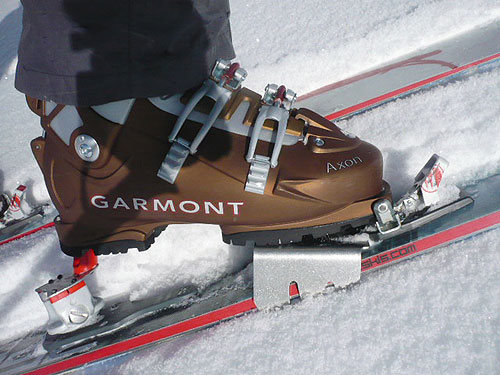 After a few backcountry tours in Big Cottonwood Canyon and the Uintas on skis with Dynafit bindings, I skied the Banana Chute off of Mount Ogden with the Axon’s. Snow conditions on that decent from the top of Mount Ogden to town ranged from wind blown powder to bulletproof crust to perfect settled hero powder to lower elevation mank and finally the standard tracked out trail for the exit. The Axon was the ideal boot for the variety of conditions that day, giving me support when I needed it with good forward lean. The fact that I didn’t really notice them throughout this near 5000′ decent was a good sign that they were comfortable and functional. 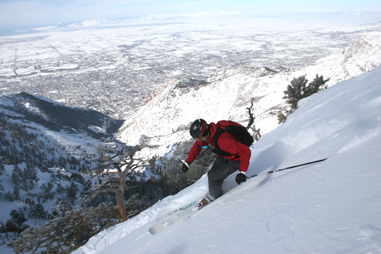 Regarding the forward lean, the Axon is different from any boot I’ve skied. It employs two different forward lean options – the typical 20 degree setting and the more forward 25 degree option. It takes a bit of getting used to in order to set the boots into the desired lean mode but once you try it a couple of times you’re dialed. Charging hard with ample forward lean was never this easy.

Seriously, you can’t go wrong with the Axon weather you use Dynafit or another binding. Don’t be fooled into thinking that because they accept the Dynafit bindings that they will sacrifice performance.  They are solid regardless of which binging you use.  And if like me you’re concerned about weight, these boots are worth the additional weight a fourth buckle gives you for the performance and stability that the trade off brings. In all but the “death march mega tour” and ultra light mountaineering situations I now favor the Axon over my Spirit 3’s.

While Garmont stuck to a traditional touring boot design with the Axon, using a plastic tongue rather than the overlap plastic of some other Free Ride touring boots, I think the Axon is a sure hit for any skier, especially those that are making the transition from alpine to touring and don’t want to give up too much performance by doing so but also aren’t interested in a super heavy boot.