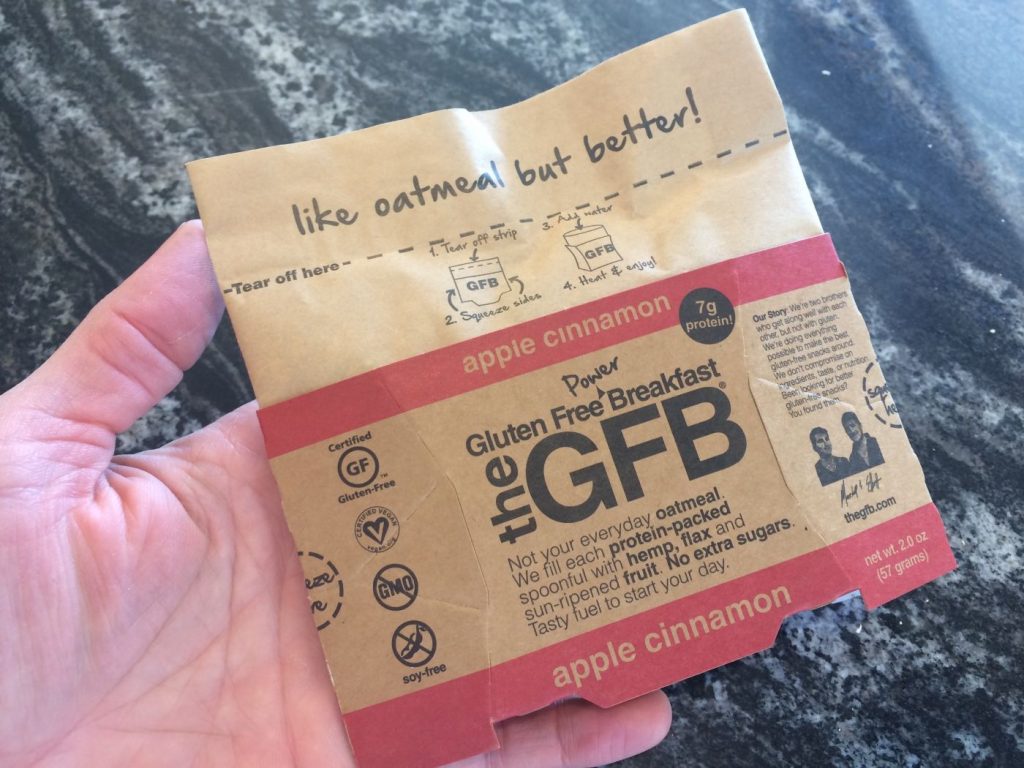 Eating healthy is part of being an athlete. It’s critical to fuel your body with the proper, high-quality foods that can keep you going longer, harder and faster. For some, eating gluten-free is a choice but for others, their body just doesn’t agree with gluten. I’m neither of those, but recognize the need for high-quality gluten-free snacks and meals.

The brothers behind The GFB are dedicated to making gluten-free, vegan, soy-free, dairy-free and non-geo foods that still taste good. Here’s a little more about them.

After trying a few of their snacks (PB+J and Dark Chocolate Coconut Gluten Free Bites), I dug into a Power Breakfast after a long bike ride. At 220 calories, the Apple Cinnamon Power Breakfast is packed with some good ingredients:

Pretty straightforward ingredients. All whole grains and devoid of anything processed.

The Power Breakfast comes in a case of 6 for $15 and each packet turns into its own bowl for cooking and eating. It’s pretty slick, actually. It stands up on its own and stays put in the microwave and on the counter for easy eating.

I filled mine to the fill line and put it into the microwave for 90 seconds. It came out pretty thick, so I would likely add more water next time. But, since I’m not averse to dairy, I just added some milk and stirred it up. In the end, it cooks up pretty thick, but quite tasty. It’s not overly-seasoned or sweet so you can still taste each natural ingredient separately.

It’s not going to be something that kids will likely devour, but for someone who recognizes all the goodness in there and loves a healthy, whole food breakfast, these are quite tasty.

The GFB snacks and foods are available at most Target stores nationwide, so keep an eye out for them and give them a try.