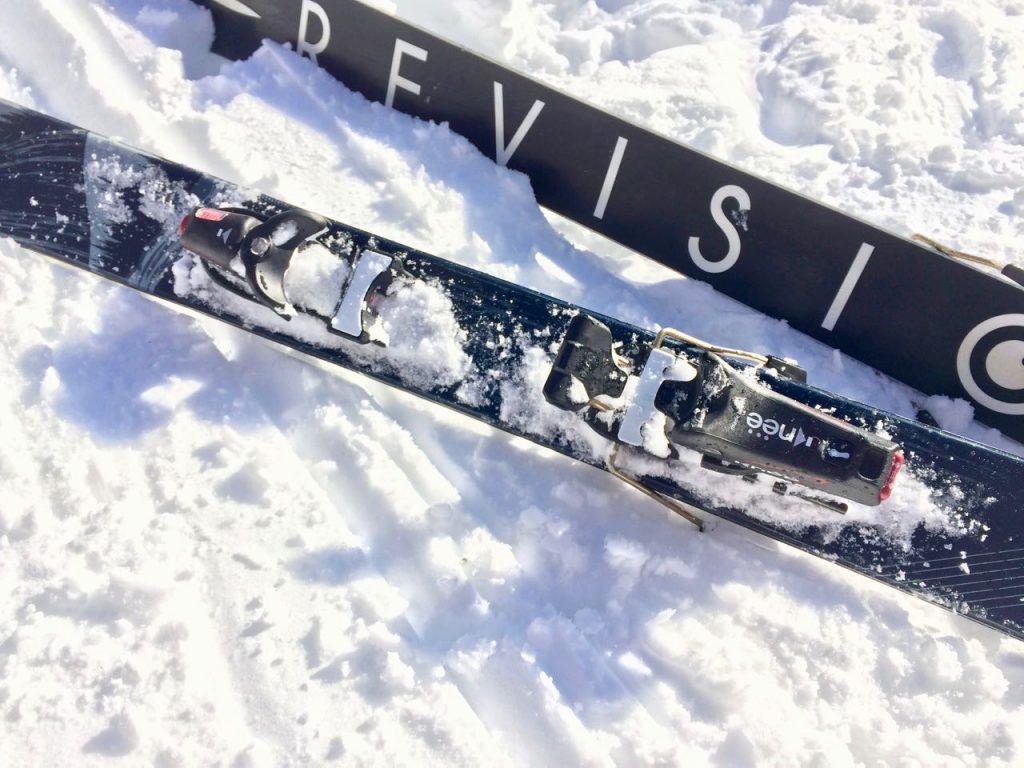 As someone who has suffered an ACL injury while skiing, I’m particularly cognizant of my knees when schralping the gnar. Luckily, the folks at KneeBinding are also well-aware of the staggering amount of ACL injuries that skiers suffer each year. Their mission is to improve the safety of ski bindings and I gave them a whirl to experience them for myself.

When anyone talks about a ski injury, 9 times out of 10, they’re talking the dreaded ACL injury. It sucks and it’s a long recovery. And, even if your body is mended (like mine has been for 20 years), the pain and subsequent recovery lingers in the back of your mind.

When I tore my ACL, it was a forward-twisting affair as I landed on and broke through a wind crust layer, which was stout enough to reduce my momentum immediately. My bindings were a set of Look turntable bindings — essentially identical to those still sold today. Had the KneeBinding been around then, there is a chance my knee would have been spared nearly a year of recuperation.

John Springer-Miller, Chairman of KneeBinding explains the benefits of their patented PureLateral heel release in the following video:

Most ski shops have jigs for the most common bindings on the market. The process is easy and they do it all the time. With KneeBinding, that’s not yet the case, but luckily, REI both sells and mounts them as do many other specialty ski shops. In the Salt Lake City area, there are several as I’m sure there are in other ski towns.  Their dealer network is expanding, so search for one nearby.

I had to swing them up to REI in Salt Lake City (30 min away) to get them installed. They were eager to do it and I’m glad I called beforehand because they will need both boots. Most of the time I just bring one in, but since there is a right/left binding, they need both boots.

Once mounted, the KneeBinding Carbon’s may not look as streamlined as some of the top bindings on the market, but that unique look is a key part of the function.

For starters, you’ll notice that there is quite a stack height and dual AFD pads at the toe and heel to ensure friction-free release at both ends. The base plates are wide and match the extra width of today’s skis. They also include a variety of brake widths to cover any ski on the market. While I’ve been testing the rather bland Carbon model, there are other models with flashier colors to suit your tastes.

When going with a set of dedicated alpine clamps, there are a few things to consider: Stack height, ramp angle (delta), boot compatibility, DIN, price, weight and overall safety. KneeBindings do offer a bit of a trump card on that last item since they are the only bindings with lateral release at the heel (PureLateral). If ultimate safety is a concern, then all the other items go out the window. But, the reality is every ski binding has tradeoffs.

In slush, hardpack and powder, the KneeBinding Carbon’s do their job quite well. There’s no slop or question as to whether the binding is functioning as expected. It features a solid step-in “clomp” and releases just as easily when the day is done. Throughout my testing, I didn’t have any pre-releases or any releases at all for that matter. Based on the feedback from more demanding park and pipe skiers, I’ve not zero reasons to believe that there will be any pre-release or improper release issues here.

I do notice that the skis I have these on (Revision Bodrum 179) do feel extra damp and lack pop. Without mounting the bindings onto another set of skis, I can’t yet say it’s the bindings fault, but that is a question I’ve got in the back of my mind.

Since I do have both alpine and A/T boots, it sure would be nice to see KneeBindings with WTR sole compatibility (Thanks John for clarifying that these will work with the most common soles you’ll find today). And, they don’t have the sexiest look to them. Vanity aside, the extra bit of safety is worth it.

We should all be more conscious of our precious knees. And, if you’re in the market for new bindings, it’s certainly worthwhile to consider a set of KneeBindings. They offer solid performance and clamp like champs on all terrain plus they will significantly reduce your chances of that dreaded ACL injury.