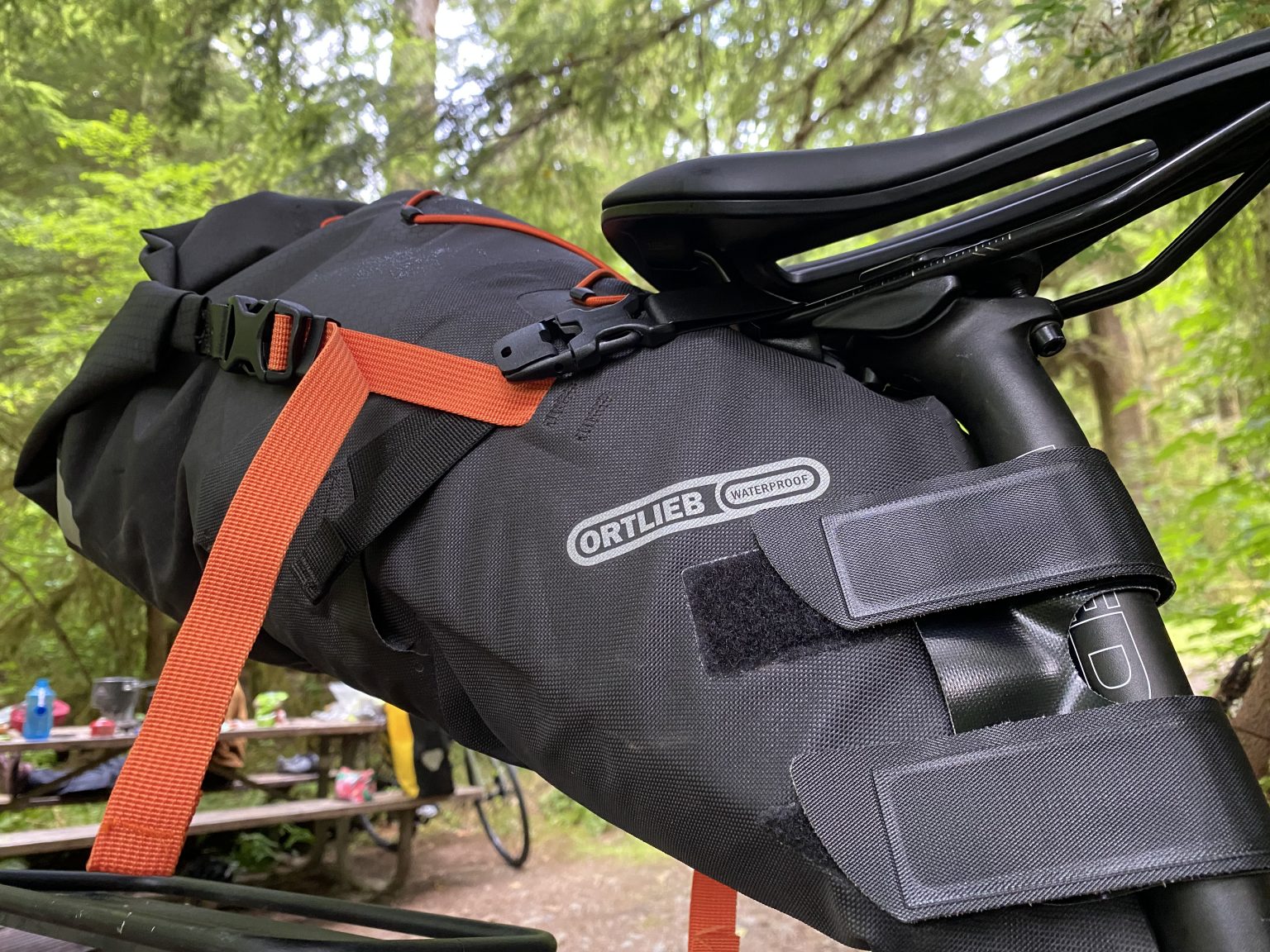 This summer, I took an incredible bike packing trip using a suite of gear from Ortlieb. I chose it to withstand the rainy Olympic Peninsula in June, and have been using it on the bike since then. We already published our coverage of the Ortlieb Handlebar Pack QR, and now we’re finishing up our coverage of my bike packing setup featuring the Ortlieb Frame Pack and Seat Pack. Today we’re covering the Seat Pack, which is an innovative way of carrying a lot of care in an aerodynamic way.

Arguably the best feature of the Ortlieb Seat Pack is how incredibly cool, sporty and hip it makes your bike look. I mean, who except the most dedicated adventurer would hang such a ridiculously large bag off of their seat post? I do have to say, I get so many compliments on this thing while bike touring. It’s a fun change from panniers, but it’s not without its quirks. So let’s dive into those.

Seat bags might be less familiar to consumers, but the idea is that they hang from your saddle rails and seat post. It really is like attaching a big tail to the end of your bike, and the big problem with them is that they can be prone to side-to-side sway. This is worsened if you’re sprinting, the bag is loaded poorly, or maybe if there’s a really heavy sidewind. Some of them, like this one from Ortlieb, include an anti-sway system and are also safe for carbon seatposts.

Ortlieb’s anti-sway design is good, and is probably one of the better ones in the industry at the moment. There’s a sturdy molded plastic piece that forms the ‘frame’ of the bag, sitting at the front end and wrapping securely onto your seat post with heavy, strong hook-and-loop fasteners. Then you pull two cam-locking adjustment straps up through your seat rails and back down to the pack frame. Cinch those babies down and you’ve got a nicely suspended seat pack. The problem is, it’ll still wag: you don’t want to put your heavy gear back here, and if you try and sprint while fully loaded you will find that the tail wags the dog. Ortlieb sells a Seat-Pack Support-Strap which I did not test, but which might help.

The great thing about it is that you can stuff a lot of gear into them. For me, the 16.5L large size was where just about all of my compressible, soft gear went. Because the closure is a roll-top, it’s natural to compress the gear. Ortlieb included a clever little on/off air valve that lets out trapped air and then seals tight against water and air leaks. Overall it’s an awesome system, with the exception that it can be hard to load these designs securely; you’ve got a big floppy fabric mouth until you’ve rolled it and secured the straps, and to tighten those down I had to move to the front of the bike so I could brace against it while I pulled the straps. All of this is trickier when your bike is already 20-30 lbs. heavier.

In practice, it’s a great addition to a bike touring setup because it’s an aerodynamic way to carry a lot of gear. It is hard to pack well, not least because it is shaped like a gigantic funnel. Plus, when you undo the roll-top closure, the pack loses structure and you’re likely to have your clothes spilling out onto the pavement. But there are nice touches, like a built-in daisy chain for a light and a bungee on the top if you want to put something on the outside of your pack.

Like the Ortlieb Handlebar Pack QR, this has an IP64 dust- and waterproof rating, meaning that if the roll-top is rolled 4 times it will fend off splashes from any direction. So don’t worry about that rooster tail coming off your rear tire, and enjoy a drier back as a nice bonus.

Overall it’s pretty easy to love the Seat Pack for how much storage it adds, and in such a sleek and aerodynamic fashion. While it’s impossible to eliminate all of the sway this can generate, it only bothered me when I tried to stand up and put my own side-to-side motion through the bike. But otherwise, for a waterproof way of storing a whole bunch of light, compressible gear, it’s hard to beat the Ortlieb Seat Pack.