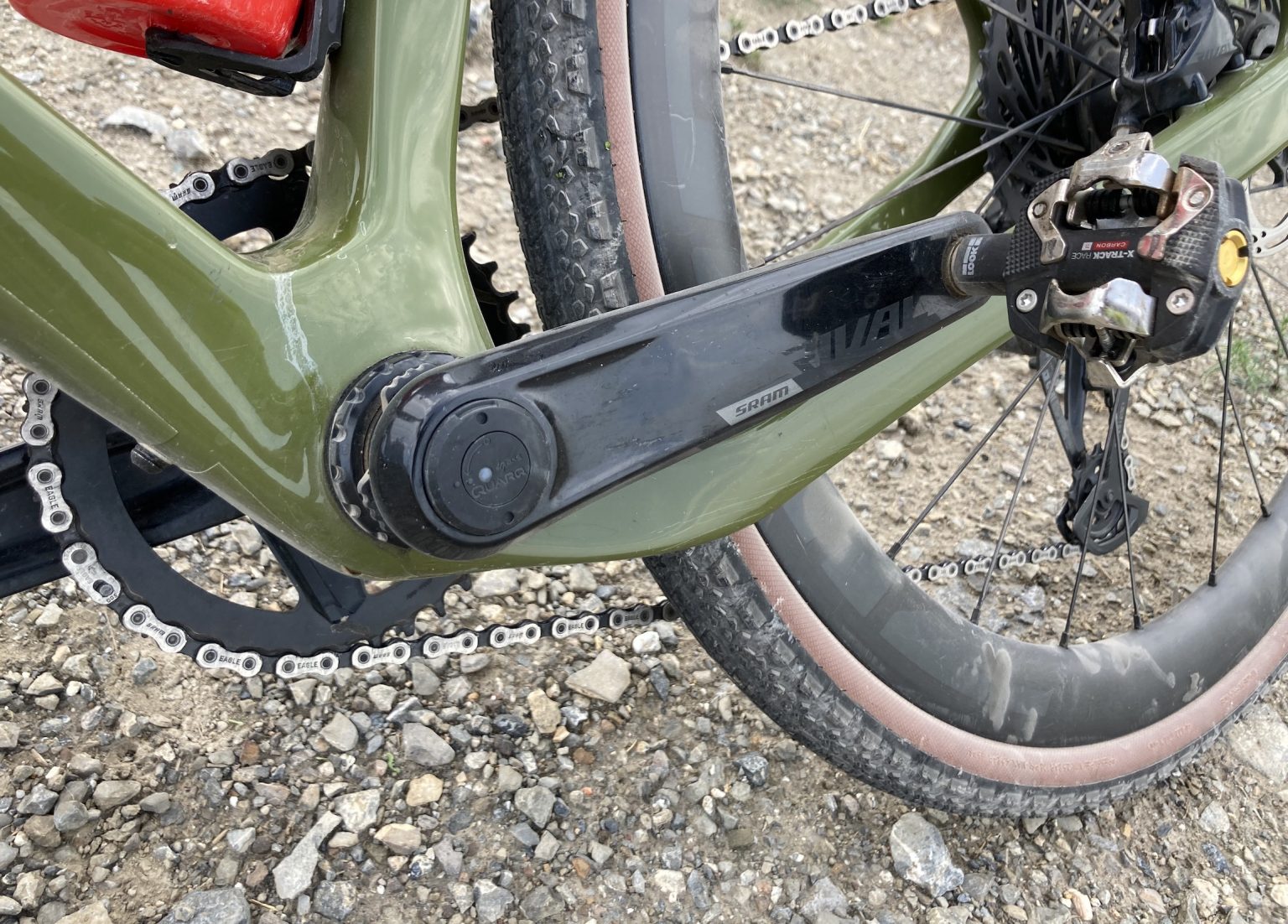 Everyone wants more power. But, can you really get more power for less? With the new SRAM Rival AXS DUB crankset, you can get one-sided power measurement included with your crankset or as an easy add-on.

Knowledge is power, power is knowledge

Knowing your power output, and, subsequently harnessing that power is one of the most effective ways to optimize performance. I use it to track performance over time and I also use it to make sure I don’t burn my matches too soon on long rides. I have tested more sophisticated dual-sided units from Quarq, Stages and Pioneer over the past few years, but they are more expensive and may not necessarily be any better for most riders (more on this later).

Inside the Rival AXS Power Meter is the same Quarq technology that’s led the industry for years, but just in spindle form. Paired with SRAM’s affordable Rival AXS drivetrain, it’s a stellar value and something that will find its way onto stock builds (like the Trek Domane SLR6 eTap) or as an easy upgrade path for the myriad of Rival AXS bikes on the market (like the Specialized Tarmac SL7 Comp). It looks stealth and has just plain worked out of the box.

To get any power meter up and running, you’ll need a head unit that supports either ANT+ or BLE (pretty much all do). My primary unit has been the new Wahoo Elemnt BOLT V2 — it locks on in a hurry and always provides consistent data tracking. I’ve put the Rival AXS Power Meter through its paces over almost 1000 rugged, gravel miles and I really have no complaints. I used it with a Rival/GX AXS mullet drivetrain, but you can use this unit with Rival AXS XPLR or Rival AXS 2x kits just the same.

As opposed to other, more expensive units, the Rival AXS Power Meter is single-sided. The add-on price of $249 is in rare territory these days. But, like everything in bike land, availability continues to be spotty (but should improve throughout 2022). With a single-sided unit, the data is just doubled to get your combined measurement. Unless you have significant left/right disparity, a single-sided power meter should do just fine. My balance is pretty even, so I’m just fine with this solution and everyone but the professional will agree.

There are several great things about the Rival AXS Power Meter besides the price. I love that it uses AAA Lithium batteries instead of a teeny tiny watch battery. And, because it’s not integrated into the spider (unlike the SRAM Red AXS one), you won’t have to replace the chainrings and power meter once worn.

The single LED light provides positive green light reinforcement after a couple of revolutions to let you know it’s ready for pairing. Here’s the meaning of all the variety of blinking:

I wish the Rival AXS Power Meter had Magic Zero to continuously zero out the unit. Instead, all zeroing has to be done manually using the easy-to-use SRAM AXS mobile app. For the most accurate power, the unit needs to be zeroed out before each ride. I’m really bad about that practice and I never noticed measurement anomalies, but I’m sure accuracy would be improved should I change my behavior.

When looking at accuracy and performance, I rode the same routes on back-to-back days with the SRAM Rival AXS Power Meter and then the Red AXS Power Meter to see how things compare. I had both the  Ventum GS1 and the Open UPPER set up with road tubeless tires. They weren’t identical setups, but close enough for my purposes. Showing the performance between both efforts, data is very similar. In fact, I had the exact same time both days.

For SBT GRVL 2021, I pre-loaded the route and used power to maintain performance throughout the 100-mile Blue Course. When racing with power and maps pre-loaded, I could change the view to show the climb duration and power output. With that data at my fingertips, I was able to pace myself without burning out unnecessarily. Since I wasn’t racing for the podium, my goal was to remain comfortable with enough left in the tank to tackle the brutal Corkscrew climb.

In addition to real-time power measurement to keep enough gas in the tank, I like to look at my Power Curve in Strava to see where I’m tracking from ride-to-ride. This shows my power output compared to my last 6 weeks of data. It’s a great data point to measure ongoing training.

If you are outfitting a bike with SRAM Rival AXS or if you have one already, adding the Quarq, spindle-based power meter is a no-brainer. With it, you can reliably measure your performance on the road or on your indoor trainer. And, once you understand your power, you can avoid bonking on your next race.