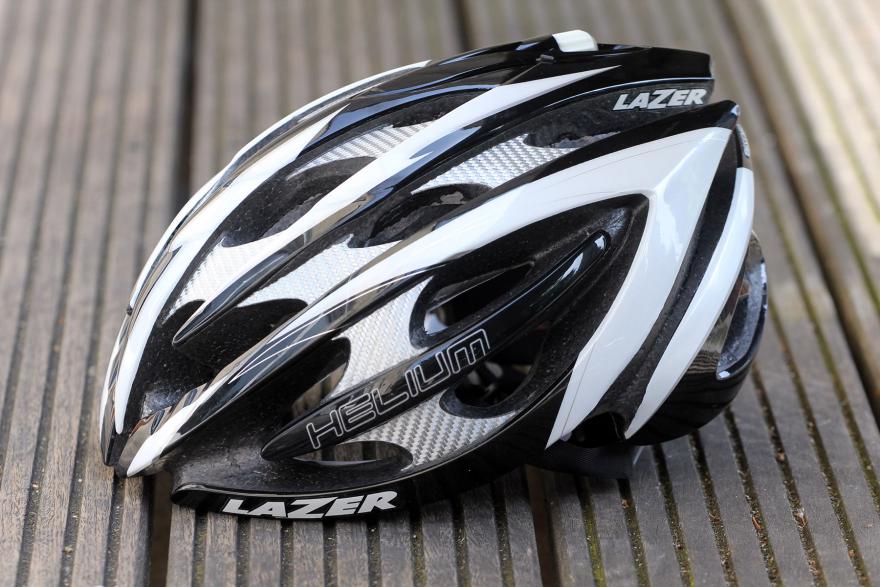 When crashing one’s bike, one rarely has the opportunity to control how one’s noggin impacts terra firma. When skull meets root and rock, rarely does it strike at a direct angle – instead, it rolls and ricochets and explores multiple directions as your brain quietly squishes around inside. Yes, multi directional impacts are a reality – thank goodness for the new technology called MIPS – the Multi-Directional Impact Protection System. We’ve already tested on MIPS brain bucket with the Smith Overtake, and to give further insight into the technology we’ve been throwing around a Lazer Helium MIPS helmet on some rocky cyclocross terrain for the past few months.

The idea behind MIPS is pretty simple. Imagine a ball rolling down a hill that suddenly hits a brick wall. Now, if you remember your AP Physics class, you know that the ball has two types of energy just before it hits that wall – motion energy from the ball’s horizontal movement and rotational energy from the ball’s spinning motion. When the ball hits that wall, both types of energy are expended upon impact. That’s different than, say, a block sliding down the hill which only has energy from motion, but no rotation. Now this isn’t a perfect metaphor, but what MIPS wants to address is the rotational energy that gets transferred to our skulls in a crash. Most helmets are built for stopping sliding blocks – MIPS helmets want to be able to stop rolling balls.

Hopefully that makes sense. In any case, I’m a scientist by training and one of the ways that MIPS has proven its credibility to me is that it has released some of the peer-reviewed literature behind its designs. In the sciences, peer-reviewed literature is the gold standard for good research. What it means for the consumer is that the reasoning behind MIPS is sound enough that it passed the scrutiny of unbiased (read: not affiliated with MIPS) experts in the field of impact engineering prior to publication.

So what does MIPS look like in a helmet? Well, it’s really not too complicated. MIPS is essentially an inner liner in the helmet that works as the intermediate liner between your head and the helmet. The helmet-side surface of the MIPS liner is very slippery and can move with some freedom inside of the helmet. The outer side (at least on the Smith and Lazer models I’ve tested) is a gel-filled substance called Xstatic that provides cushion and support for your head during normal riding.

The Xstatic no doubt works well with the MIPS layer, but in the Lazer Helium in falls short in one regard. It doesn’t hold sweat very well, and I found that more sweat made its way down from my hair onto my glasses lens than with other helmets. That said, the Helium is very well vented with 19 vents dotting the dome. Spread throughout the braces is a system of altered foam density that’s designed to give more rigidity to the helmet in the event of a crash. This is a fairly common feature in good helmets, but it’s worth noting.

Lazer uses a special fitting system called Rollsys to get a good fit. The dial has been moved from its usual place on the back of the helmet up onto the top so that it can tighten the helmet’s suspension more evenly through the front and back of the helmet. The result is, I think, a superior-fitting helmet; it eliminates pressure points at the back of the head by spreading out the force evenly. In turn, the straps also provide a comfortable next-to-skin fit. They’re soft and smooth and won’t catch on beard hair.

Lazer isn’t actively producing the Helium anymore, but it still serves as a good test case for the MIPS technology. The difficult thing, of course, is that I can’t actually validate MIPS’ claims myself – I’m not going to go and do a comparative study of me crashing into a rock with MIPS/no-MIPS helmets on. However, I’m confident that the peer-review process has kept MIPS to a high standard of scientific integrity. Another benefit for the consumer, too, is that since this helmet is no longer made by Lazer you can find it at a discount as a last-season model from places like Art’s Cyclery.

If it’s time to get a MIPS helmet for you or your loved one, the Lazer Helium is a great option. It’s reasonably affordable, especially considering a year or two ago it was one of the most desirable helmets in, for example, the CX world. This review has been about MIPS in large part, too – it’s an important new technology and I suspect it may gradually become a standard. Time will tell how the research holds up.