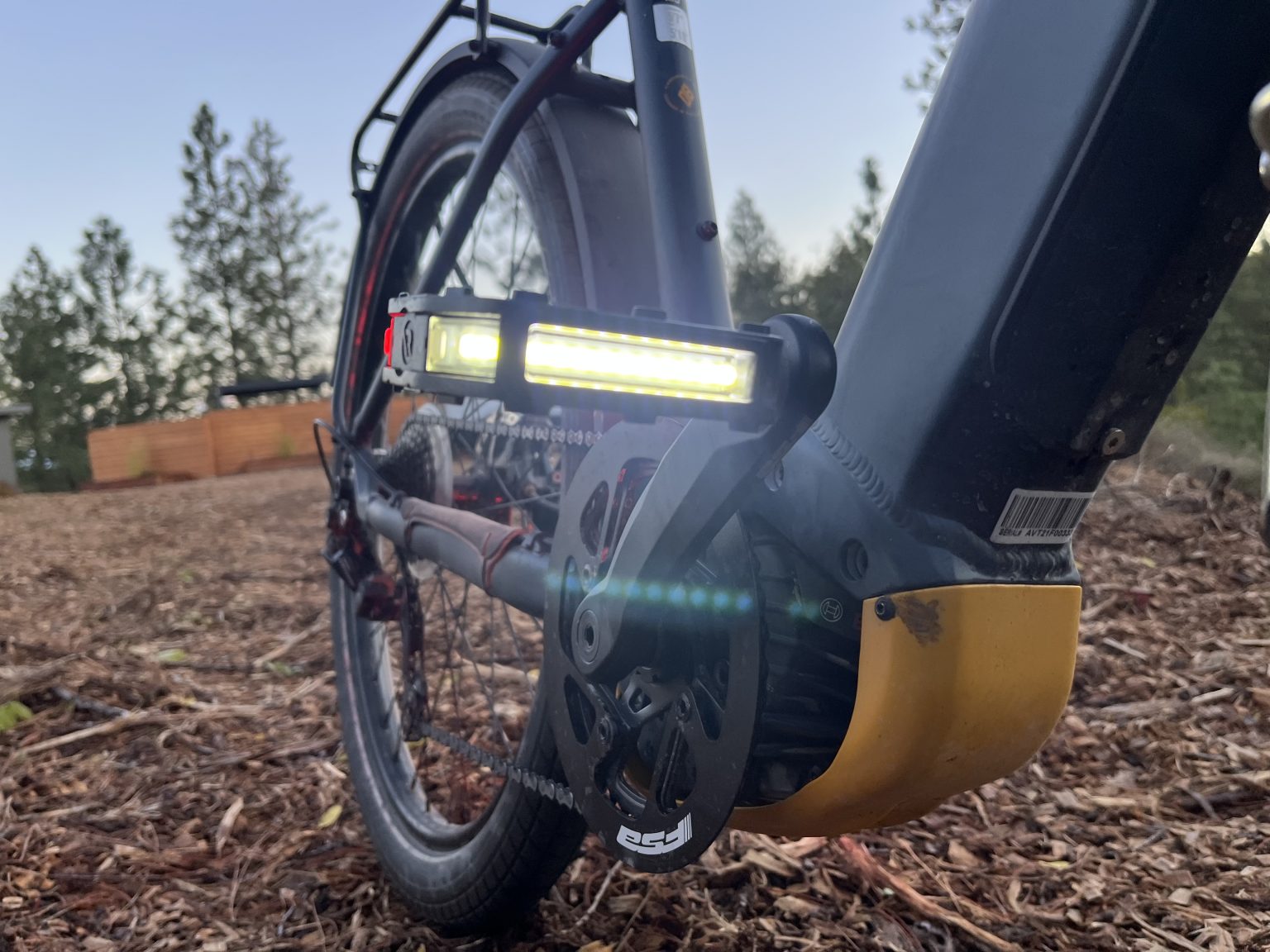 Finding the perfect bike safety light has been a long journey for me. I’ve been frustrated with the short battery life of the high-lumen rear lights that I’ve tried, and haven’t wanted to skimp on visibility for longer lasting light. By far the most compelling recent entry has been Redshift Sports‘ new Arclight Pedals, newly on the market after an incredibly successful Kickstarter launched them into the world.

Be Flashy, Get Seen:

I’ll start by saying that these pedals have a special place in my heart because they helped me feel more safe as a bicycle commuter. As a trial-by-fire, I tested them in Seattle on medical school rotations at busy urban hospitals, with early morning commutes and late-night burrito runs. The areas around these hospitals are incredibly busy, and despite Seattle’s great bicycling infrastructure you still have to deal with throngs of pedestrians, impatient Teslas, and clueless Instagrammers behind the wheel. We’ll get into the details more, but the bottom line of this review is that these pedals work without you needing to think about them.

From a distance, the Arclight pedals look like any other commuter bicycle pedal. There’s a big, spacious platform with raised aluminum nubs for traction and sleek graphics. Look a little closer, though, and you’ll see two slots machined into the front and back of the pedals to accept the Arclight LED module.

The pedals themselves are made to the same standards as other premium flats in the industry. They’re machined aluminum, with a steel spindle and sealed bearings which ensure a lifetime of heavy use. They’re heavy, weighing in at 11oz each, or just about 1.3lbs/set. But they also feel really sturdy.

The LED modules themselves are simple-appearing sticks with a prominent strip of LED’s and a USB-style connector on one end. Place them into the slot on the pedal, and they snap into place with a satisfyingly secure magnetic zippiness.

Those magnets are what’s behind the real magic of the Arclight, too: the ability to automatically orient any of the light modules forward/backwards depending on the polarity of the magnetic relative to the earth’s magnetic field. There are still some great videos up on the Kickstarter page which explain some of how the technology works.

For the user, though, all that matters is that it just seems to magically work: front lights turn white, rear lights turn red, spin your pedal and watch each unit automatically reorient itself. Magic.

Equally magical is the excellent runtime that the LED units boast. The eco-blink mode can run for up to eleven hours, which for my commuting schedule meant that I could ride these for nearly two weeks without charging. The steady mode seemed good for the 3-or-so hours that Redshift promises, which I only used when it was pitch dark. When it’s time to charge, Redshift includes a nifty four-unit charter for the Arclight LED units, which plugs into any USB port.

Speaking of pitch dark, I know that some users wonder about whether these are suitable to replace a forward-facing headlight. My answer is, for dark and poorly lit roads, not really. They are meant to enhance visibility but, between the lumens and the motion, they aren’t really bright enough to be your only light illuminating the path ahead. However, on well-lit city lights, they added a really nice contrast and help visualize pavement irregularities.

Aside from the snappy magnets and magical-feeling technology, the most important benefit of the Arclight pedals are, well, the fact that they mount on your pedals. There are some data from the world of applied psychology that demonstrates that dynamic lights in motion, such as those mounted on pedals, are much more ‘conspicuous’ than a simple tail light or head light.

Redshift also created a light module and mini-mount, which has the same position-sensing technology as the pedals but can be stuck on your seat post or handle bar. As before, it’s clever enough to know which way  to face based on its orientation, and has the same three settings as the pedals. The LED units are totally interchangeable with each other.

Using the pedals is really fun. They turn on automatically when the bike moves, and shut off after a short period of being still. They totally have that ‘this is cool’ feel to them. The materials are high-quality, and the pedal body itself is sturdy and totally game for urban life. The aluminum nubs offer enough traction to be reliable, but aren’t sharp like some MTB flats and won’t wreck your shins (or chinos). I’ve even cornered a little too hard and knocked the pedal edge, but they still look fine.

To be transparent, when I was using these pedals I didn’t care about the weight one bit. But that’s because I have an E-bike to commute on! So adding the extra visibility and safety was a no-brainer. And if your commute isn’t too strenuous, you’re not going to care about the weight, either. It’s only people with long, hilly commutes who care about speed who are really going to suffer from the extra grams.

We’re starting to head into Christmas, and I’d be hard pressed to think of a cyclist who wouldn’t like to try these pedals on their commuter bike. They’re suitable for commuters and recreationalists of many stripes, as well as for loved ones who you want to give an extra element of safety to. Beyond that, though, the technology is just plain cool and there is nothing on the market quite like them. With high quality materials and great engineering, the Arclight Pedals promise many years of hard riding and high visibility.