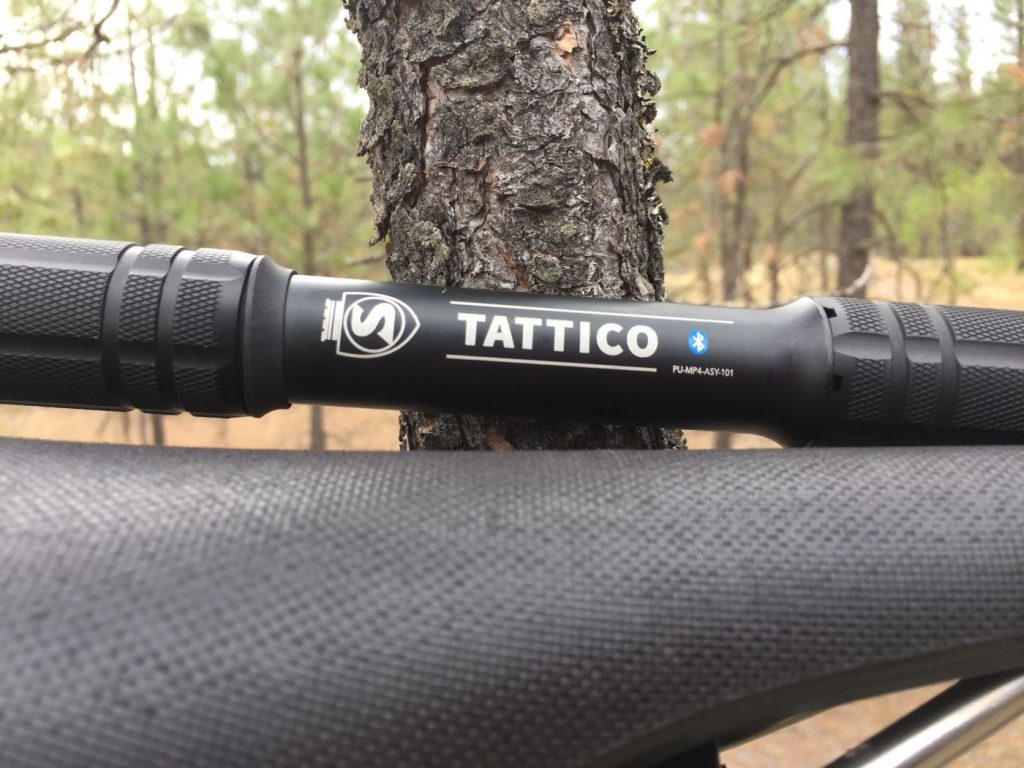 Cyclocross season is in full swing in the Pacific Northwest, and I have been having an absolute blast getting out on the steel bike and rolling over wet roots, rocks and leaves. With that, though, comes flat tires – and flat tires mean cool gadgets like the Silca Tattico Bluetooth Mini-Pump.

A pump from the future

The Tattico is built from highly durable 6061 alloy and it has the tactical feel to live up to its name. It looks like one of those fancy military flashlights that people carry around. It’s also small enough to be tossed into a jersey pocket (in addition to including a mount for the frame) so there are multiple ways to bring it with you. I didn’t mount it on my frame since I switch bikes too often, but it stayed put in my jersey pocket well.

From the ground up, the Tattico has performance in mind. It features a unique design which delivers roughly 10% more air per stroke than pumps of similar length, and I did notice that the pump feels noticeably more efficient and quick than other ‘mini’ pumps I’ve used. Perhaps most noticeable, though, is the extremely good heat management design that Silca built into the pump. For one thing, there’s a heat sink down at the end of the barrel that absorbs heat from friction. The other key thing is that the Tattico is built with a dual-barrel design where the barrels are separated by an insulating layer of air.

I was impressed with how well the Tattico handled heat overall. Pumping up a road bike tire to a reasonable pressure can be a lengthy endeavor, and in warmer weather sweaty hands holding a hot metal pump can be a recipe for failure. The Tattico goes a long way in mitigating that issue. Internally, the Tattico’s special adapting seal is a cup-type seal rather than an O-ring, which performs better as the pump heats up.

Though the Tattico is well equipped to handle heat, the really hot (forgive me) feature is the Tattico’s Bluetooth-enabled design. I was skeptical at first, primarily because Bluetooth can often be finicky even when connecting to something as commonplace as a portable speaker. Will the syncing be quick? Will the battery be reliable? Will the app be clunky and terrible?

As it turned out, my fears were groundless. The Bluetooth technology is remarkably smooth and well-adapted. The app takes a measly 1.8mb of space on my iPhone and loads quickly. And then, just like Silca promises, pairing is as simple as starting to pump. Within maybe 5 strokes or so the app recognizes the pump and begins to display pressure in PSI to the first decimal. Other common pressure options are available, and the app also lets you select between mountain pressures, road pressures and shock pressures for scaling. You can also set a target PSI to ensure accuracy.

Overall, the pump is very accurate. It’s definitely more accurate than my old-ish floor pump and I did not see any issues arise at high pressure. The pump is satisfyingly fast at low pressures, too; it felt like I was doing around a half-PSI per stroke up until about 30PSI, which is great for mountain biking. Pumping to 100PSI is do-able (as in it takes some elbow grease but overall performs well for a mini-pump), and I think the pump’s special cup seal gives it a competitive edge over other pumps in retaining efficiency at high pressures. If you’re really concerned about pumping to high pressure and not having to break a sweat, though, frame pumps are probably your jam.

The Tattico features a pretty slick hose design which deploys from within the pump, hidden beneath a rubber cap. There’s a very small, sleek silver chuck to seal the pump onto the valve, no screwing required. It’s easy to actuate and won’t chop your finger off when you try to unseal it. That said, I was frustrated with the amount of leakage I was getting after pumping up to pressure and then flipping the chuck off. It wasn’t a huge amount, maybe 5PSI, but it frustrated me.

Silca’s done a good thing for the world of cycling. Accurate roadside pressure can go a long way to making your rides longer and more enjoyable, and cross and MTB riders will find a lot to appreciate in the Tattico’s rugged design, too.