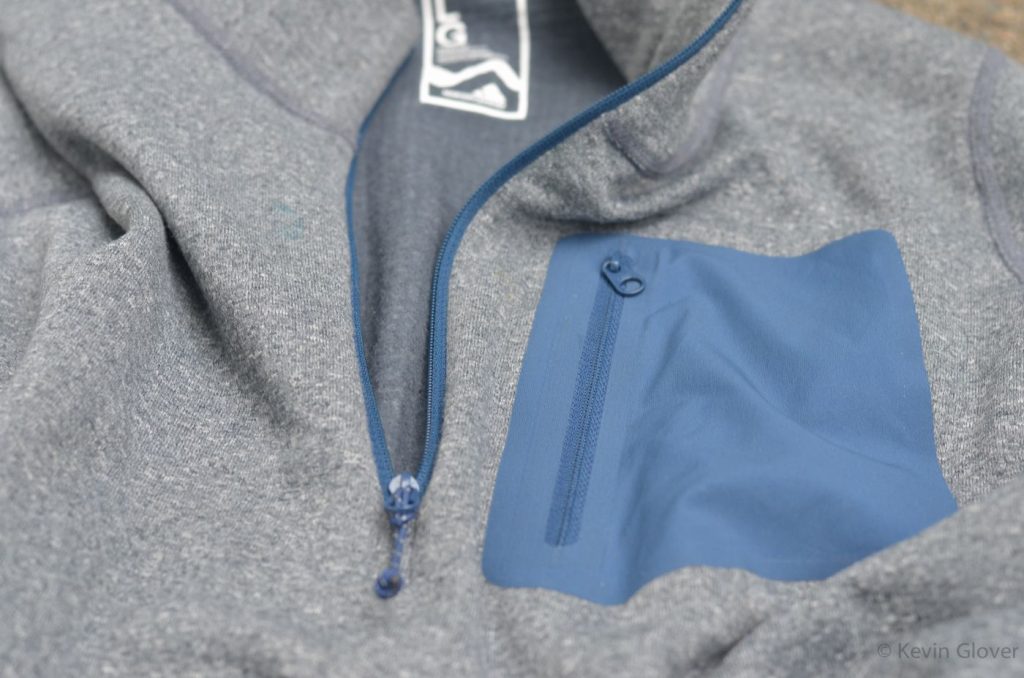 There are few legendary names in North American outerwear. When two of them team up, great things are bound to happen. Enter the Stratum Zip, the latest brainchild of Westcomb’s gifted designers. It features Polartec‘s newest fabric, Power Wool. I’ve taken this pullover up classic Northwest test pieces like Rainier and Forbidden Peak and I’m stoked to spill the beans on this great layer.

I want to begin by talking about the foundation of the Stratum, namely, Polartec’s new Power Wool. Wool itself needs no introduction, but we all know that it comes with pros and cons. On the one hand, it’s the classic wet-weather insulator. On the other, it’s either scratchy, delicate or both. This is the triangle of concerns that makers of dealt with for centuries, really. Polartec’s Power Wool is, in that sense, a continuation of a long heritage of working with wool.

Polartec’s description of their new fabric makes me smile because it reads a little bit like a peer-reviewed journal article:

“Merino wool is inherently resilient due to a cortex of intricate filaments that give the fiber its soft crimp. By adding resilient synthetic fibers in the bi-component construction we further enhance the overall tensile stability and resistance to abrasive surfaces.”

So what they’re saying, really, is that they figured out a way to stick together a layer of merino with a layer of polyester/spandex. You can imagine what the benefits could be: increased durability, odor resistance, rapid drying and wet-weather insulation. So, in short, the promise is that they’ve retained all the benefits of merino with none of the cons. But will that hold up to testing?

Alright, now let’s jump back to the company who actually put needle and thread into the Stratum – Westcomb. It’s worth noting that the hand that threaded that needle lives in Vancouver, BC. Yes, North American manufacturing is alive and well with Westcomb, and the Stratum sports a proud ‘Made in Canada’ tag. Companies who have offloaded manufacturing overseas tout how much quality control and oversight their factories have, but I’ve rarely seen garments that can match Canadian quality. Westcomb is a fine example here. All of the lay-flat seams are perfectly stitched and there is not a single loose thread anywhere on the garment. The welded pocket is sleek and minimalist, blending seamlessly into the body of the piece. Both zippers pull easily, thanks in part to Westcomb’s choice not to use a locking zipper.

The Stratum’s fit is standard and, I would say, true to size. I am usually between a medium and a large and, lo and behold, my Large fits slightly loose on my 5’11”, 180lb frame. It’s fairly snug along the arms and best, making sure there’s no extra fabric in your way. The waist is trim without being tight and the garment is long enough to tuck underneath a harness comfortably. Westcomb cut it with a high collar which, when zipped up, provides a comfortable and not-too-tight shelter from wind and cold right up to my adam’s apple.

This piece is designed to be worn next-to-skin or as part of a layering system. I usually wore it over another layer so that I could shed it easily as I tend to heat up quickly. For example, I wore it on the snow 4,800 feet of gain from Paradise up the interminable Muir Snowfield to Camp Muir on Rainier. We started off in the cool of the morning on a crisp, fall-feeling day. We would go on to have perfect climbing conditions but, for the moment, we were just focused on getting our gear up to camp. As the day went on I continued to wear the Stratum, eventually forgetting that I had it on. Once I got up to Muir I pulled my back off and prepared to layer up, and was really disappointed when I couldn’t find the Stratum in my pack. I thought I had forgotten it at the car. I mentioned it to a friend – ‘Hey, do you remember seeing that grey Westcomb layer in the car?’ ‘Dude, you’re wearing it.’

Yeah, I felt dumb. But I share the story to underline a point: I have often said that the very best pieces of outdoor gear are the ones that you forget about when you’re using them. This is true of helmets, glasses, socks, underwear, layers, shells, puffies, etc. Really great gear ought to disappear beneath the experience. The Stratum is such a piece of gear – it wicks so efficiently and is tailored so thoughtfully that it was easy for me to forget that I was wearing it.

That said, if I could I would tweak the design in two ways. First, I’d add stretch paneling under the arms to increase range-of-motion without causing the garment to ride up. Second, I’d add a cuff to the sleeves so that they seal more tightly around your wrists. The first one is probably a bigger deal, but neither really impeded me when I was climbing in the jacket. Even on Forbidden Peak, with its plethora of awkward and exposed moves, the Stratum reached with me every time I needed it to. But if it’s going to stick around in Westcomb’s line, those are the changes I would suggest.

As things stand now, I haven’t washed the Stratum once since beginning my testing in August. Predictably, there’s a bit of a musk in the armpits but, crucially, it’s much less than what you’d expect from a normal merino piece. Really, for that matter, it’s way better than what you’d expect from most pieces except the best anti-microbial offerings. That’s because the Power Wool, too, is woven with a silver salt to inhibit bacterial growth.

I’ll finish with one last trip report. I took Westcomb’s Stratum, as well as a handful of other testers, up Forbidden Peak’s classic West Ridge recently. It’s a great climb and we had wonderful views until getting socked in 2/3 of the way of the ridge. The rest of the day was windy, cloudy and cold and the Stratum was soon covered up by a tester shell. By the end of the day, the Stratum still looked like new despite the hardface spending plenty of time in contact with Cascades granite; the shell, in contrast, had numerous abrasions exposing the waterproof membrane despite the 40D face fabric. That’s a pretty unexpected result, truth be told. So, put aside your doubts about wool’s durability. My testing says the Power Wool in the Stratum can cut it.

Westcomb has created an alpine workhorse thanks to Polartec’s Power Wool. The Stratum is a trustworthy companion in challenging environments, and the benefits of wool really can’t be overstated in the Northwest. Plus, thanks to that Canadian heritage, you can trust the Stratum to stick around for years and years.