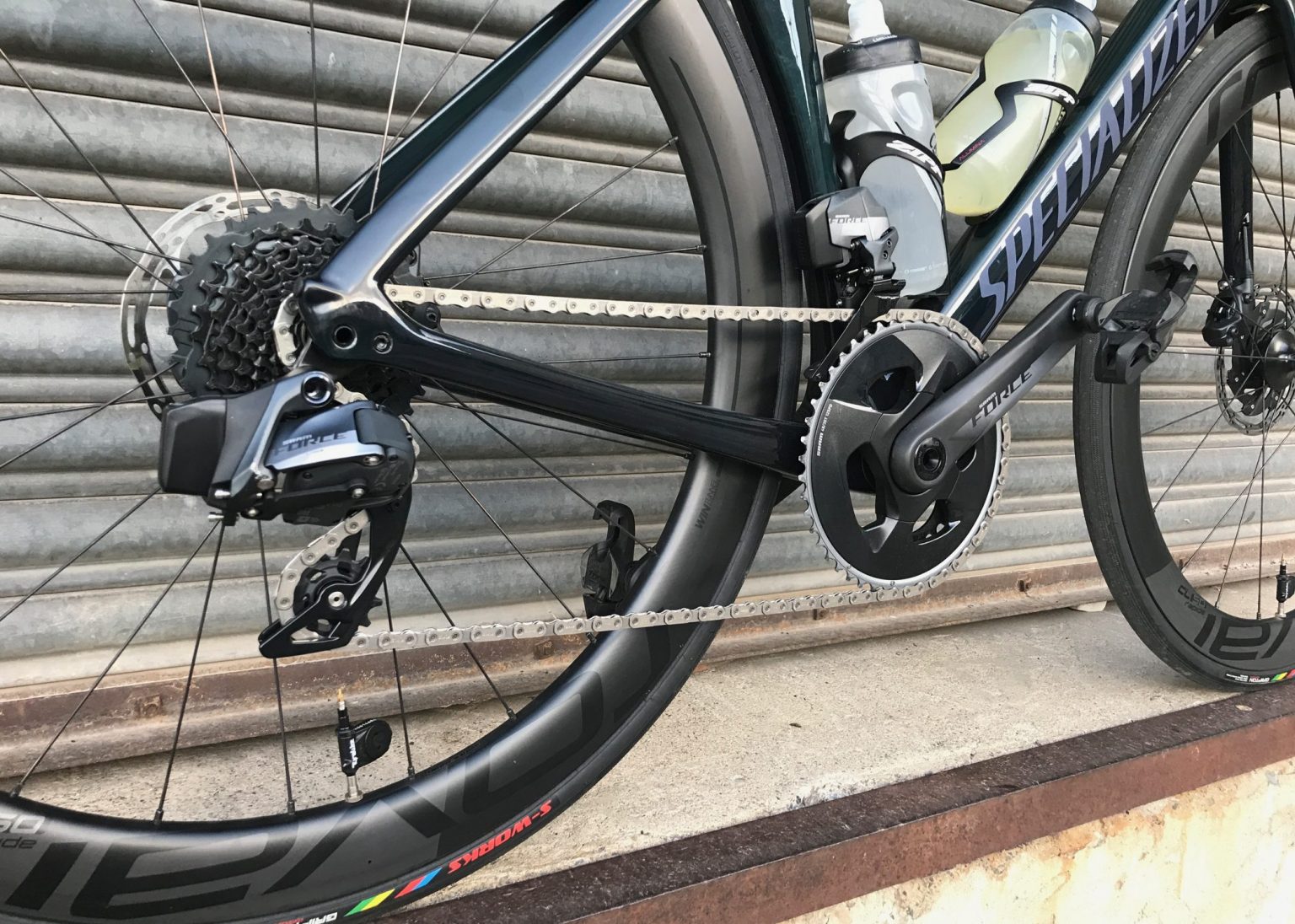 SRAM Force and Shimano Ultegra have long been the best value in road groupsets. You get the same form-factor as Red and Dura-Ace, but at a significantly-reduced price in exchange for some added grams (about 200-300 grams). Now, with SRAM Force eTap AXS, not only is it functionally identical to Red, but it’s now popping up on OEM builds across every manufacturer. Now, getting wireless 2×12 is easier than ever and I’ve been testing it out on the stock Specialized Venge Pro eTap. In short, it’s good… real good.

When SRAM introduced Red eTap, I was instantly a fan. In both rim and disc variants, it simply outperformed everything else on the market. Fast-forward a few years and the anticipation of a Force-level eTap groupset was almost to a pitchfork and torches level outside SRAM’s Chicago offices. The masses wanted an affordable eTap option, but SRAM had to bide their time until 12-speed was refined and ready for production. That time came in February 2019 with the Red eTap AXS launch as SRAM also dropped a hint that Force eTap AXS would be available in April 2019.

Since that time I’ve put hundreds of miles on both Red eTap AXS and Force eTap AXS. Again, without question, Force is the best bang-for-your-buck. Luckily, it will come as standard equipment on a plethora of 2020 models. If you see it on that new bike (like the 2020 Specialized Venge Pro) you’re eyeing, proceed with gusto.

12-speed introduced some new variables with gearing options. That little 10-tooth sprocket opens up all kinds of possibilities and allows SRAM to have tighter gaps between gears with every cassette. My test setup  featured a 48/35T chainset with a 10-33T cassette. The low and high-end range with that combination is absolutely amazing.

With that gearing, I could still pedal at over 40mph yet at the same time, have a near-1:1 gear ratio for steep climbs. That, my friends, is the magic of SRAM’s XDR driver. If you’re getting a Force-equipped bike off-the-shelf, it will be included. But, if you’re building up a custom bike with Force eTap AXS, you’ll need to consult your wheel manufacturer to get a compatible XDR driver. At this point, every major hub brand should have one and they typically cost around $100. And, that 10-33 cassette is magical with excellent range and no huge jumps.

Again, the beauty of Force eTap AXS is that it feels and functions identically to Red eTap AXS. Most notably, the hoods. I like the slight updates to the hoods over 11-speed eTap. It feels a little more comfortable in-hand and still provides all the goodness you’d expect — reach adjust, easy bleed port access, ergonomic brake levers and huge, easy-to-tap shift paddles. Those shift paddles now have an improved feel for better tactility with or without gloves during all seasons of the year. Again, SRAM has delivered the best shifting performance with thick, winter gloves on. That big shift lever is so simple, even a caveman could do it (thanks Geico). Those little buttons on Shimano Ultegra Di2 are nice in the summer, but become difficult to tap reliably with winter-weight gloves on your digits.

Fine-tuning Force eTap AXS is easy and best done in-the-saddle. Press and hold the AXS buttons on either lever and shift. It micro-adjusts up/down the cassette based on which paddle you shift. Additionally, keep in mind that with both the upper and lower limit screws, a 1/4 turn can make the difference between the chain staying put and overshifting. Unfortunately, on one ride up the Alpine Loop, near Sundance Ski Resort, I over-shifted off the cassette and into the spokes. I had lots of climbing to do still (2000 ft.) and because my multi-tool didn’t have that small of an allen wrench, I couldn’t use my 33t chainring for fear of a repeat. Once home, it didn’t take much to ensure that didn’t happen again — maybe 3/4 of a turn. Problem solved and lesson learned.

Shifting otherwise is smooth and reliable. I feel as if it is a teeny bit faster than 11-speed eTap and the icing on the cake is the Orbit fluid damper that the rear derailleur features. No more chain slap or clanging drivetrains. It’s amazing. Now, when I head out on Ultegra Di2, I can’t believe how much the chain slaps around. Force eTap AXS is so much quieter in the rough stuff and is so nice for the rattle-averse crowd (could me in that group). It isn’t quite as strong as the clutch on Rival 1 or Force 1, so don’t expect that, but for most terrain, chainslap is a thing of the past.

Braking is just as good as prior models. It’s never completely quiet, but braking power is reliable and consistent. And, those new rotors do look slick (and are said to provide improved cooling). Over the course of my testing, the pads retracted wide enough to not have much in the way of rotor rub. Maybe a handful of times after long descents is all, but all-in-all it has been a relatively rub-free rotor experience.

Those eTap batteries are always a source of concern. I tend to cycle through my batteries every month, just to be sure they are fresh. And, I have an extra one that’s always charged, just in case. It’s easy enough to check their status by tapping the AXS buttons on each derailleur or simply shifting and watching the LED. Green is good, green/red is getting low and red means to charge it up. Ideally, the front derailleur will have more juice remaining, so swapping batteries to get you home is the recommended course-of-action.

Note: I’ve messed around a little with the AXS mobile app. It’s great for updating firmware (quick and easy) or other personalizations. The jury is still out on some of the options, but know that you can re-assign buttons and such to your liking. I’ve just kept everything with the default settings because it’s what I’m used to.

The much-anticipated Force-level eTap is as expected — functionally-identical to Red eTap at a fraction of the cost. I can’t tell the difference on the road and neither will you. With Force eTap AXS, you can afford to upgrade those wheels or bars and still have a superbike.

With SRAM Force eTap AXS, you have all the goodness of Red eTap AXS at a fraction of the price. Mission accomplished. You'll find Force eTap on plenty of 2020 bikes, but if you're looking at a custom build, don't shy away from saving some coin and putting that savings into a set of Zipp 303's or something. Setup, ergonomics and overall performance is the best yet from SRAM.