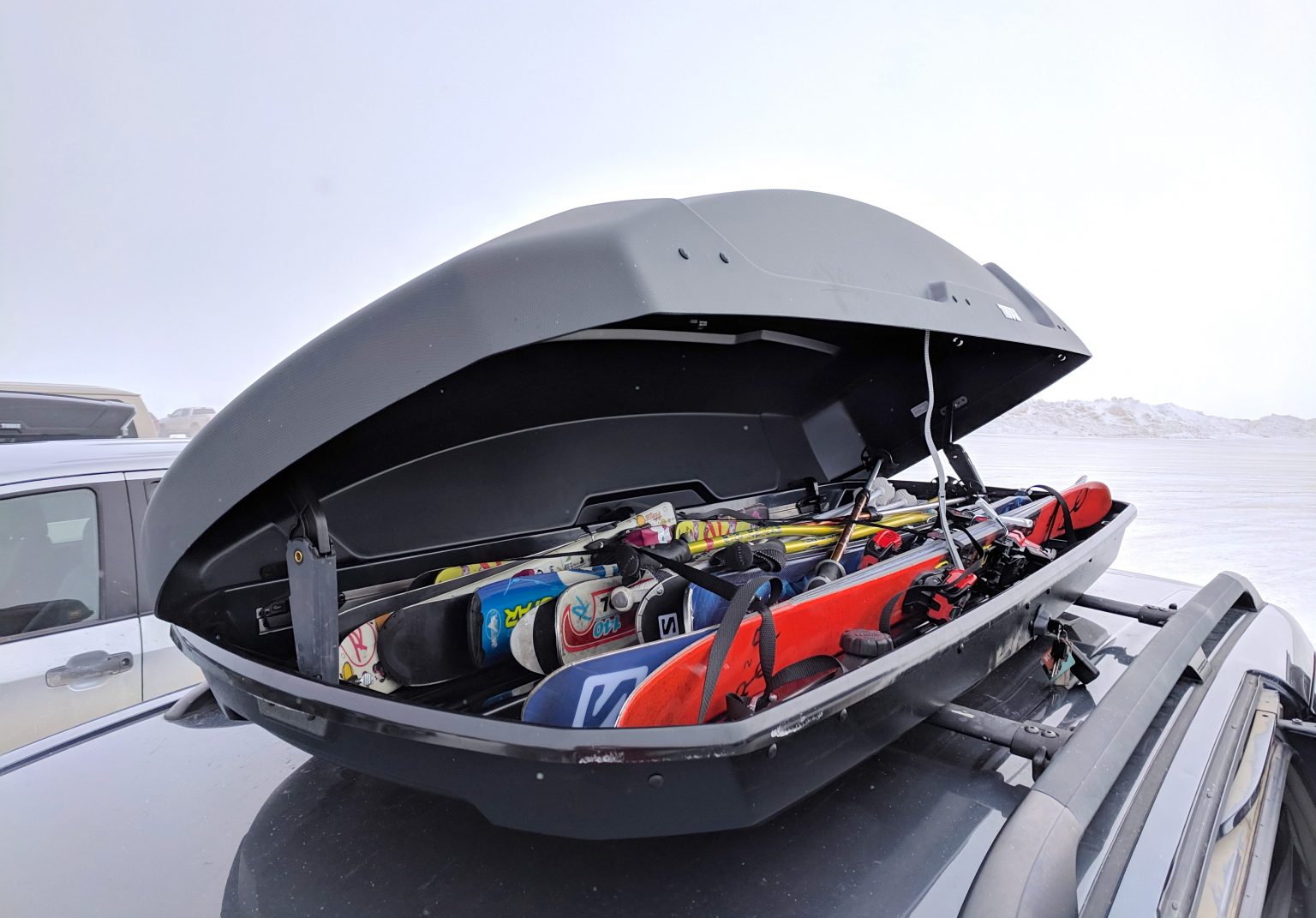 Cargo boxes have almost become a must have if you have an outdoor adventuring lifestyle — especially if you have kids. It’s amazing how much gear gets added each time you add an additional human into the mix. Go big, because you’ll always need the room, so that’s why the XL size was on test here. I have been testing the Thule Force XT XL Cargo Box through the 2018-2019 winter season and it has earned a permanent place on the family hauler.

Bigger is better (when it comes to cargo boxes)

I’ve owned a few cargo boxes over the years and while it’s always nice to have the biggest box possible, it’s not always the easiest to live with. The Thule Force XT XL Cargo Box is certainly the largest cargo box I’ve used and the extra space is totally worth it. And, Thule has made overall usability a breeze with the Force XT. Full disclosure: we have 5 kids, so we need all the room we can get, but until now, we got along fine with smaller, skinnier boxes. At times, we had to be a little selective in our gear choices (“ah man, you mean we can’t take the entire gear closet?!?!”) but we made it work. With the Force XT, that has changed.

When it comes to capacity, my go-to measurement is skis. Can we fit all the skis in the box? If yes, then it would work. More on this later, but spoiler alert, yes, all the family’s skis fit easily into the Force XT XL.

The extra space gives you a lot of versatility, even if you don’t have a large family. It gives you the option to store all of your gear or luggage (duffles or suitcases) outside the car, which opens up room for passengers (human or furry). This is huge, especially if you are sleeping in your vehicle. I’ll add that spending a little more to size up is worth it. Boxes aren’t cheap and saving a few bucks by getting a smaller one might be a regretful decision once you add another child, another friend or a dog into the mix. So, size up if you can.

Do all the skis fit?

Yes, all of the skis definitely fit! The Force XT XL is wide enough to fit all seven pairs of skis and poles side-by-side And, there’s even enough space left over for ski boots and bags as well. I wouldn’t recommend throwing the boots up there on the way to the slopes (cold boots = cold toes), but the way home is great. For reference, the longest skis I own are 185cm and they fit with room to spare.

One great thing you’ll notice in the picture are the cargo straps. The Force XT includes strap loops and three straps so you can cinch your stuff down to prevent shifting in transit. I love this, especially if your driving on bumpy roads. Without it, a pile of skis rolling around creates a racket! But more importantly, it helps save your gear from getting damaged.

Big on style, low on drag

Go on, it’s okay to admit. You partially like the idea of a cargo box because it looks cool. It’s true, boxes are cool, and in my book and the Thule Force XT looks great. I’m gonna call it svelte and rad. Yes, I did just use “svelte” and “rad” back to back. You’ll definitely get style points with the Force XT.

I was curious to see if our fuel efficiency would take a hit with a bigger box. With our smaller box we lost about 2-4 MPGs over an empty rack. With the larger box, we’ve seen the same performance. I haven’t noted any larger drop in MPGs, we still maintain 21-22 in the minivan.

Thank you, Thule for taking the process of mounting the box and simplifying it! It really doesn’t get much easier than the PowerClick system. In the past I’ve had to spin multiple dials per clamp, or spin a level then lock it down. It’s always been a pain. “It’s too tight, now it’s too lose, now too tight again!” This is a phrase I haven’t uttered with the Force XT. The oft-dreaded chore of getting the clamps into the right place while clearing the rear hatch is also easy as each clamp slides into place. It’s definitely the easiest cargo box mounting process I’ve used by a long shot.

Though the install process is easy, still, I have some pro tips.  First, follow the recommendation to have a second person help lift it into place. Of course I didn’t and the job would have been much easier if I would have heeded. Second, when you receive the box the clamps won’t be installed, you’ll have to do that yourself. The process is fairly straightforward but you will need to be cautious. The clamps slide into place but the plastic is a little thin and it may be easy to break the slide and the attachments. I would have liked to see this be a little more burly. I was a bit skeptical that it would hold, but after a few test drives and then 80+ MPH down the freeway, I’m confident that it will hold. I hope Thule adds something to reinforce those clips.

The Force XT features DualSide opening which allows easy opening from either side of the vehicle (an important feature). Since the XL size is pretty wide, it’s hard to reach all the way across from one side, so DualSide solves that problem. The box opens very easily — in fact, you can open it completely one-handed. I’ll admit that I’ve grabbed gear and stepped up to toss it into the Force XT many times without opening the lid. Though it’s not ideal, I can open the lid with one hand while holding onto gear with the other. Closing it is equally-easy, particularly with the grey pull strap, which closes the box in one motion. It comes down low so you don’t have to reach high to close. I haven’t had to finagle once to get it to close. Super smooth.

My biggest pain point has been with the key. While the key is reversible, for some reason it goes in easier one way than the other. I had to mark on the key so I knew which side was the smoothest I haven’t been able to figure out why, so a little bit of Sharpie is my friend. I do love the big knob for locking/unlocking. It is very easy to use, even with ski gloves on.

Go big or cram your gear in your car! The Thule Force XT XL is big enough to carry a ton of gear while keeping it secure in transit. Overall, the Force XT is easy to live with, looks great and doesn’t hurt your MPG’s too much.

Eric is a UT native who currently resides in the Wasatch Back. He always takes his passion of the outdoors with him. Skiing, trail running, bike commuting, backpacking and camping fuel his outdoor endeavors. As a husband and proud father of 5 daughters he looks forward to passing on his passion for the outdoors.