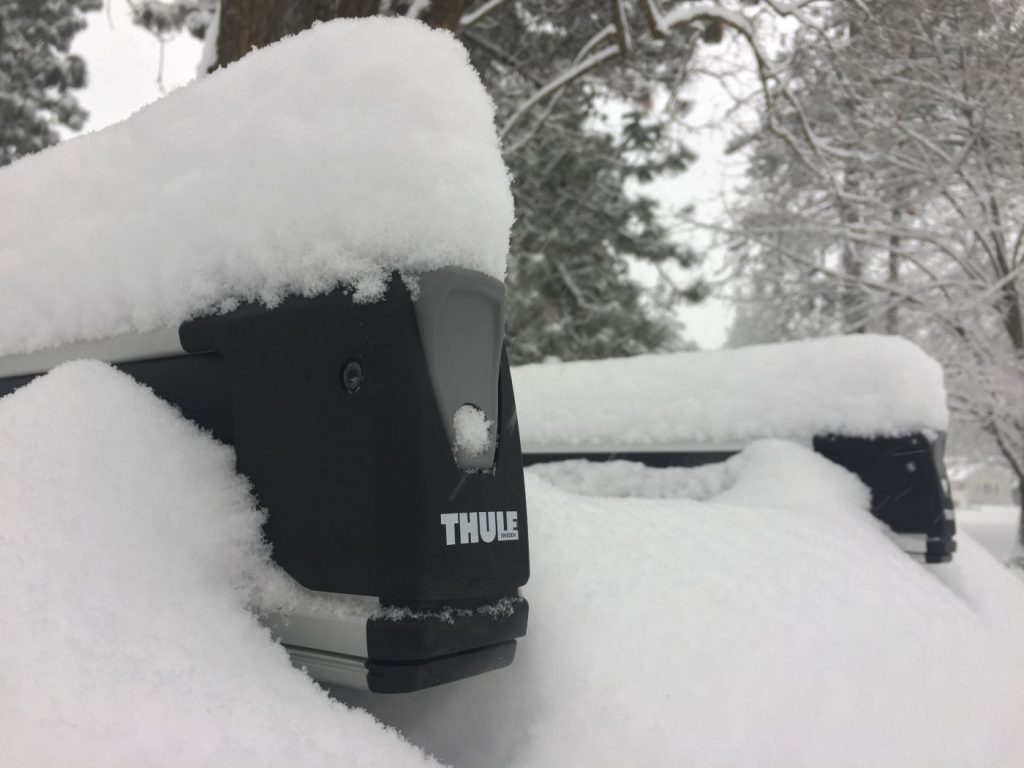 You know Thule. You know the Thule SnowPack. Now, meet the Thule SnowPack Extender. It is, probably, the coolest ski rack on the market right now. It’s been on my whip all season, ferrying skis and boards up and down the mountain roads.

For when you just can’t quuuiiite reach:

Thule’s SnowPack Extender takes a classic rack and adds a simple twist. The SnowPack is well-regarded for its durability, quite ride and ease of use. It’s hard to make a ski rack that doesn’t scream like a satanic demon in high winds, but the SnowPack is as quiet as they come. The big issue with loading skis onto any rack, though, is simply that you have to reach well over the car to be able to reach the back of the rack. If you’re wearing ski boots, that can be a nightmare. If your car is wet, you get wet. It’s just an inconvenience, but still – what sells products better than adding convenience?

Thule’s solution was simple: take a good rack, and make it slide out to the side of the car so that you don’t have to reach over and onto the car to load up a rack. That, ladies and gentlemen, is all it took to innovate in the ski rack world.

This ‘Extender’ feature works quite well. Sliding out the ski rack is as simple as popping them open, flicking a lever, and then pulling them out towards you. I’ve had them on my car for about three months now and I haven’t noticed any corrosion or wear that’s prevented the rack from sliding smoothly. The one simple trick is sliding the racks in and out evenly, without changing their position relative to each other, so that your skis don’t get all crooked. That’s a minor thing, but you do have to watch for it.

The version that I tested is Thule’s 6-ski SnowPack, and it really is a monster. I’m running the standard cross bars on my RAV4 but I managed to just still squeeze in room for my Thule SideArm bike rack. Being able to haul six skis is a mixed blessing; on the one hand, I can drive all of my friends up. On the other hand, I get called on to drive all my friends up. So in that way, it could be the perfect gift for the type-A anal retentive winter driving control freak. And, let’s be honest, who of our friends drives better than we do? So, we might as well be the ones with the big rack.

Installation is an important part of any rack, particularly if you get your new rack in the dead of winter and have to install it in sub-freezing temperatures. This can either be an unpleasant experience with some cold fingers and gentle swearing, or a Shackleton-esque epic that culminates in chomping on beef jerky (of questionable origin) just to stay alive. Fortunately, for the Thule SnowPack, it’s the former — the installation is as breezy as anything can be when it’s cold. It would probably actually be fun in warmer weather.

Thule’s mechanism is simple: there’s a big rubberized strap that slots wraps around the crossbar and slots neatly into a retainer on the rack; the other side is attached to a ratchet, which you can turn with a gloved hand. It took me about 20 minutes, but that included time to scrape the snow off my roof and use boiling water to melt off the racks that were previously in the SnowPack’s place. You, no doubt, will be smarter about it than I was.

The rack rides surprisingly well. If you were to just look at it, you would assume that it would be an incredibly noisy thing. After all, it’s quite tall – something like five inches – and presents a totally block face to the wind. However, I never had a problem with any sort of excessive noise. It certainly added a modest amount of noise to the ride, but there was none of the high-pitched whistling you sometimes hear about with ski racks. I credit the lack of whistling, in part, to the great seal that the SnowPack creates around skis when it’s in use. Without as many tiny holes to pass through, the wind has fewer chances to whistle.

I’ll end with a comment about Thule’s customer service. I recently participated in a recall for their Sprint bike roof rack. Turned out the racks I’d been using for two years had been recalled quite some time ago, which made sense of how bad the ratchets had been performing. I put my details into Thule’s recall form, and within about 10 days received two large mailers to ship the racks back in, plus UPS labels. The new racks arrived in short order. I only mention this because, truly, Thule deserves credit for how effortless they made the return process; it speaks well of the quality of their brand and their products.

The Thule SnowPack Extender is pretty dominant, as far as I’m concerned. There aren’t that many racks that are as convenient, quiet or easy to install.