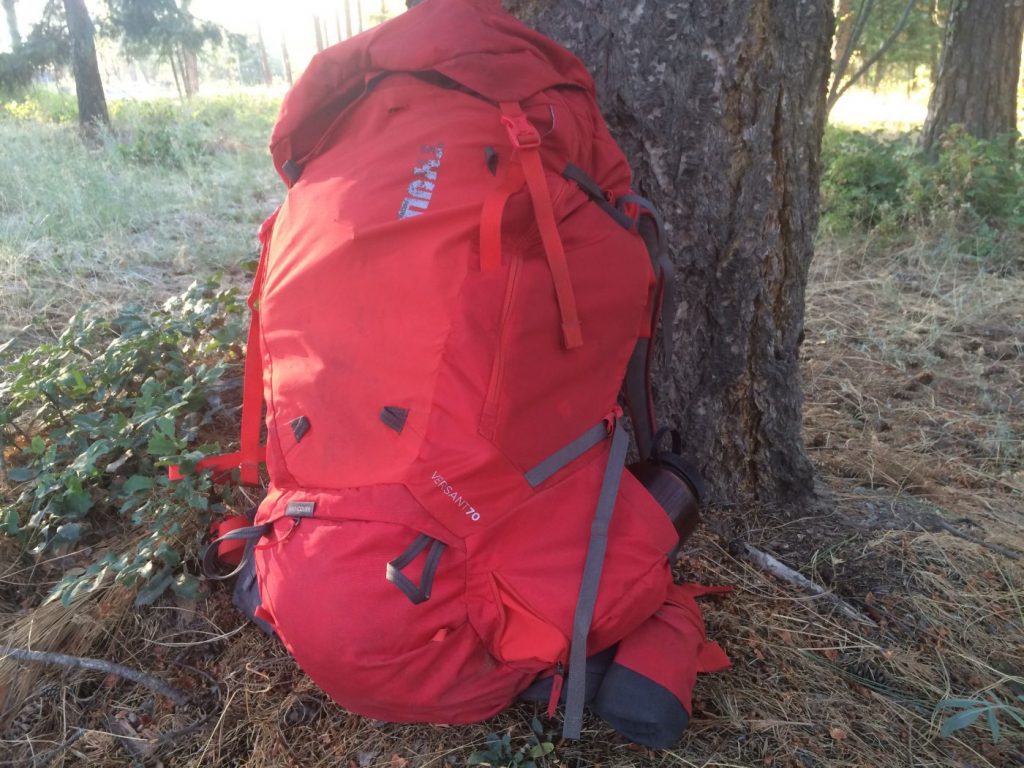 Thule has been making waves recently with their new line of innovative packs. I tested their Capstone 22L last summer and was very impressed, and gave their Stir 35L a positive review as well. Enter the Versant 70L – this time, a heavy hauler that they label a ‘versatile, lightweight expedition pack.’ I took the Versant for a 10-day expedition in the Olympic National Park, following a classic thru-hiking route from Three Forks out to the Staircase Ranger Station.

The Versant is a very creative backpack, so let’s begin with a basic list of features. First, there’s an innovative StormGuard rain cover that only covers the top 3/4 of the pack, while the remaining 1/4 bottom is waterproof. There are also two durable side pockets that are solid fabric, not mesh, but expand via a unique elasticized collar. There’s also a large U-shaped opening on the main pocket with two-way zippers. On top of that, there’s a stuff pocket that can accommodate a climbing helmet, multiple bars and an unholy amount of garbage my lazy self. The brain is detachable and has an excellent piece that turns it into a one-shoulder sling. The brain itself has three pockets, giving it plenty of organizational ability. There’s also a creative system where different attachments can be clipped onto the hip belt, including everything from a waterproof pouch to another water bottle pocket.

All that to way, there are lots of creative things going on here. All of the features that I’ve just listed work well, and I’ll talk about some of them in greater depth later on. There are two bigger problems, however, that I want to nail down. The first is the backpack’s suspension. The suspension was certainly designed with shaving weight in mind – the pack is fairly light at around 4.2 lbs, which is very close to the 4lb mark that was so magical to attain a few years ago. The back panel is a fairly traditional design with a big velcro patch that allows you to greatly adjust the shoulder harness position. There’s no creative ventilation options like we’re seeing from other brands.

The back panel and harness, in truth, feels like it’s stuck in the early 2000’s and that’s an odd contrast to the forward-thinking design of the rest of the pack. It wears like an older pack, too. If you load anything in the low 40’s and beyond into the pack, you’re going to really be feeling the pressure. In particular, the shoulder straps are just totally insufficient. The padding is wimpy and tends to slouch oddly to one side of the strap when it’s loaded, almost creating a bit of a coil of padding that digs into your chest. You won’t be bothered by that, though, because you’ll be thinking too much about the unpleasantly sharp edges of the strap as they irritate your skin. I basically hiked with my hands dug into my chest, supporting the straps, for ten days straight. I got used to it and it wasn’t a big deal, but it definitely shouldn’t be like that.

The hip belt is so-so. It does a good job at supporting heavy loads, but when you really cinch that sucker down your hips are going to feel it. I’d say my biggest complaint is that the fabric on the padding ought to have a smoother weave. That would allow your clothing layers to slide against it more easily and protect you a little more from the dreaded angry red lines that inevitably form at the end of a long day with a heavy pack. I have certainly seen better designs from a variety of companies; Thule’s option is workable but there are comfier ones out there.

The other complaint I have is durability. After ten days of hard use, the pack looks worse than some of the backpacks I’ve used to guide with for years in a row. The Thule logo on the stuff pocket is awkwardly stretched and flaking off, and the hole in the stretch fabric that the buckle passes through is frayed and ugly. More strikingly, the fancy hip belt pocket option that was included with the pack got totally shredded. The fabric is ripping at the plastic attachment points and the pocket, while not quite useless, lacks any of its original waterproof function. That said, the fabric choices for the main body of the pack are excellent and highly durable – Cordura and 100D nylon will last for years.

So, I have two major complaints and it’s obviously a bummer when gear doesn’t perform well. That said, there are many good things about the Versant which I hope Thule will take with them to future products that have a more refined suspension design. We might as well begin with the lid, or brain, of the pack and work our way down.

The lid is one of the better designs I’ve seen on a backpack. It has three different pockets, including an inner security pocket and a big fat outer one. They’re all zippered, and they account for a major portion of the pack’s organizational flexibility. Get used to keeping a lot of small valuables in your brain. Further, it includes a special lightweight strap that can turn the brain into a tote to be slung over your shoulder. A thoughtful touch – the buckles on the strap are numbered and they correspond to the buckles on the lid itself, making it a snap to get moving.

The pack is basically one main compartment, accessible from the top and an outside U-shaped zipper. Outside of that, there’s just a big stretchy stuff pocket which can accommodate something as large as a climbing helmet when needed. There’s no separate sleeping bag compartment, but that never bothered me. Instead, what you find at the bottom of the pack is the integrated rain cover. This pops out and covers the top 3/4 of the pack, leaving the bottom (totally waterproof) section of the pack exposed. It’s a neat idea and it generally works, but if your pack is overfull or if you’re a Boy Scout with tons of stuff strapped to the outside of your pack it won’t provide enough coverage.

The Thule Versant is a good first big pack for Thule, but they have some work to do to make their big packs compete with some of the other outdoor giants. I like the innovation that I see, and I hope that Thule will continue to refine the Versant until it’s as good as their smaller daypacks like the Capstone and Stir.