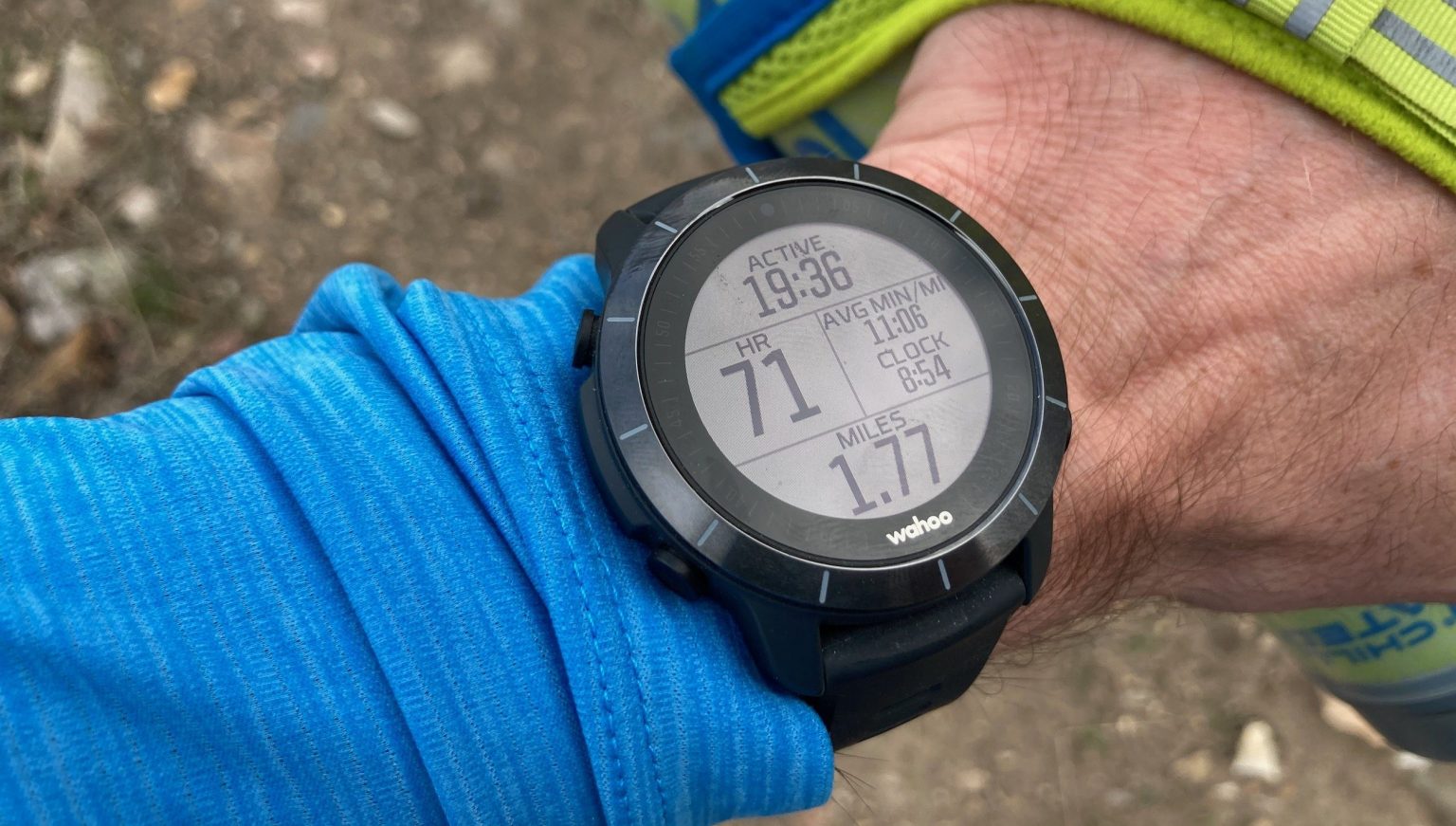 Over the years, I’ve tested first-generation GPS watches with mixed results. Going into the Wahoo ELEMNT Rival review, I wanted to believe that the unit would perform on par with Wahoo’s bomber cycling computers. I mean, if they could squeeze all that goodness onto my wrist, I’d be stoked. Now, after a year of testing, I’m here to report that the Rival has great promise, but does suffer from some first-generation glitches that I had hoped Wahoo would have avoided.

Initial experiences and a pro tip (wear it tighter)

In January 2021, we were in the middle of a cold, dry snap here along the Wasatch (strangely like January 2022). I was anxious to get out with the ELEMNT Rival on some cold road, gravel and mtb rides with trail running mixed in there — my usual routine. So, I hit the ground running (and pedaling) to see how this new watch would work across running and cycling disciplines. The thought of being able to use this watch for all my activities, and particularly, among all my test bikes, seemed like an awesome prospect.

The Wahoo ELEMNT Rival would be replacing my previous daily driver, the Apple Watch Series 3. I was initially mixed on the prospect of ditching that little mini smartphone, but it didn’t take me long to realize that I much preferred being free from the 24/7 connectivity that an Apple Watch provides. With the Rival, I could have just enough connectivity (more on notifications later), but not too much of it. As far as wearability goes, the Rival is excellent.

My biggest pro tip is that you need to wear the watch a little more snug than you might like to ensure the most reliable and accurate heart rate tracking. I thought I had it tight enough, but a quick check from the Wahoo team revealed I should have it one notch tighter. The band should be tight enough that you won’t easily be able to squeeze a finger underneath. I tightened things up and have seen improved heart rate tracking ever since. At the proper tightness, it still wears comfortably all day.

As it turned out, my initial unit had a heart rate tracking problem (which, after discussing it with Wahoo, was a known issue). Riding or trail running, the heart rate would track in the opposite direction of what it should be. For hard efforts, it would consistently drop into the 80 bpm range, or even lower. It didn’t happen on every workout, but most of the time it was just plain wrong. I would get frustrated because it looked like I was in superhero shape, but it threw off all my workout and effort calculations. The gravel ride below shows what would happen. All would be fine for about 20 minutes, then it would fall off a cliff and never get back to where it should be. After some troubleshooting, and side-by-side comparisons with the Wahoo TICKR X, Wahoo was good about swapping this one out for a new unit.

With my second unit, the heart rate tracking improved, but total elevation gained during any activity became wildly inaccurate. I became best friends with Strava’s “Correct Elevation” feature which put things back into the proper realm. Most often, it was off by a few hundred feet, but many times it was off by way more than that. As I continued troubleshooting, I would walk or run on a pan-flat route, like the one you see below, and the Rival would record hundreds of feet greater than actual (889 ft recorded vs 39 ft actual). One suggestion to improve performance was to check the pin hole sensor that’s on the top of the watch, behind the strap, to be sure it doesn’t have gunk in it. Mine has never been obstructed, every time I’ve checked.

Now, on my third ELEMNT Rival, I’m finding the heart rate to be acceptable and the elevation gain is improved, but still not as accurate as I would like. About once a month, I get an activity that will show zero elevation gain (like this  18 mile ride). Again, if elevation gain is important to you, the “Correct Elevation” feature is always a great option to have in Strava. What’s interesting is I’ve come to find Wahoo’s bike computers to be reliable and accurate for elevation tracking, but the Rival doesn’t quite live up to those high standards — perhaps regular firmware updates will improve things (I’ll continue to post updates).

Personally, I’ve standardized on Strava’s elevation data. Everyone will have their own source of truth and I use Strava. Do I expect elevation metrics to be identical between devices? No way. Watches or GPS units typically use a combination of GPS data and/or barometric pressure to do their best at measuring elevation gain. While, in theory, this combined data approach could be more accurate since it takes into account the small variances along any given route, I have chosen to use Strava as my reference. That being said, with my Wahoo ELEMNT Roam or Bolt, I rarely use the “Correct Elevation” feature in Strava because 9/10 rides pass the sniff test as they are within 5% of what I would expect. With the ELEMNT Rival, however, I correct the elevation gained almost every time. It’s a bummer.

The last major beef with the Rival that I’ll mention is the charging unit. At night, in the dark, it’s maddening getting the watch into it. It works great once you get it connected, but I still commonly spend 15 seconds just fiddling with it every night to get it attached and charging.

Things I appreciate about the Rival

As I’ve now used the Rival for over a year, I still prefer it to an Apple Watch — and particularly for my set of activities. As far as activities go, I’m talking about all types of cycling, trail running, walking and indoor training. For starters, I really appreciate the large buttons and simple navigation structure. The two bottom buttons scroll through your workout screens and automatically kick off the GPS and workout screens to the last activity type. It’s a nice way to get rolling if you typically do the same activities (running or cycling). Speaking of those screens, unlike other watches, Wahoo has an outstanding mobile app that allows you to manipulate the workout or watch screens during a workout. That is also one of my favorite features of Wahoo’s bike computers (ELEMNT Roam or ELEMNT Bolt 2).

Other devices simply don’t allow you to change the data viewed or settings during an activity, but the Wahoo ELEMNT app bucks that trend and gives you all sorts of control. I can easily add fields or re-arrange fields on-the-fly. And, before working out, the app is wicked-easy to configure things such as connecting a new sensor.

I also love how durable the ELEMNT Rival is. Wahoo chose the most durable materials available. The ceramic bezel and Gorilla Glass look brand new — in spite of daily wear and tear. I’ve bonked the Rival on just about every wall and car door around and it looks brand new without a single scratch on it.

One of my favorite features of the Rival is the heart rate broadcast feature. I use it on Zwift for indoor training and I connect it with all my Wahoo head units as well as the new Hammerhead Karoo 2. With Wahoo units, it can be set to auto-broadcast (which is pretty cool). I’ll add that I also appreciate having notifications on the watch. I’ve turned them on so I can at least see what messages I’m receiving and then I can decide when to respond. Without the ability to respond, I find it refreshing to not feel beholden to the text messages. If you like, you can also receive call and email notifications (I have those disabled).

Running cadence is also a great metric that the Rival provides. I can track trail running performance and shoot for a higher or lower cadence. Ideal cadence is around 170 steps per minute and I usually hover around 155-160 spm. That’s likely due to trail running, so I think that’s a pretty good health metric and cool data to capture without adding another electronic device to my life. Pace and cadence can also be transmitted from the Rival to other devices, if you like. Compared to the Nurvv Smart Insoles, which provide a bit more data, I still prefer the Rival for running metrics so I don’t have to change the fit/feel of my shoes.

Of course, one of the biggest selling features of the ELEMNT Rival is the touchless activity transition for triathletes. Alas, I’m not a triathlete, so you’ll have to read other reviews from a triathlete perspective. On this, you can rest assured that the Rival’s battery is going to last throughout a full Ironman. It really does sip on battery compared to other units I’ve tested.

I’ll add that Wahoo has been really good at providing regular firmware updates. The latest one from Feb 17 2022 updated the fonts and menus for a cleaner look-and-feel. In addition, several swim tracking improvements were added.

Wearables are tricky. Having something on your wrist every day clearly brings out the best and the worst of any GPS watch. That said, and in spite of some of the Rival’s worst attributes, I really appreciate wearing this watch over my Apple Watch. Still, it has a long way to go before it’s considered among the best multisport watches. Some of the shortcomings I encountered are software issues (that will hopefully be improved) and others are hardware issues (which can’t be improved). If you’re a Wahoo fan and appreciate their ecosystem, this one is worth looking into for multi-sport adventures. I really do like it for trail running, but still prefer the ELEMNT Roam or Bolt 2 for cycling. But, the HR broadcast feature is awesome for ride tracking. On top of it all, the extra long battery live is pretty spectacular.