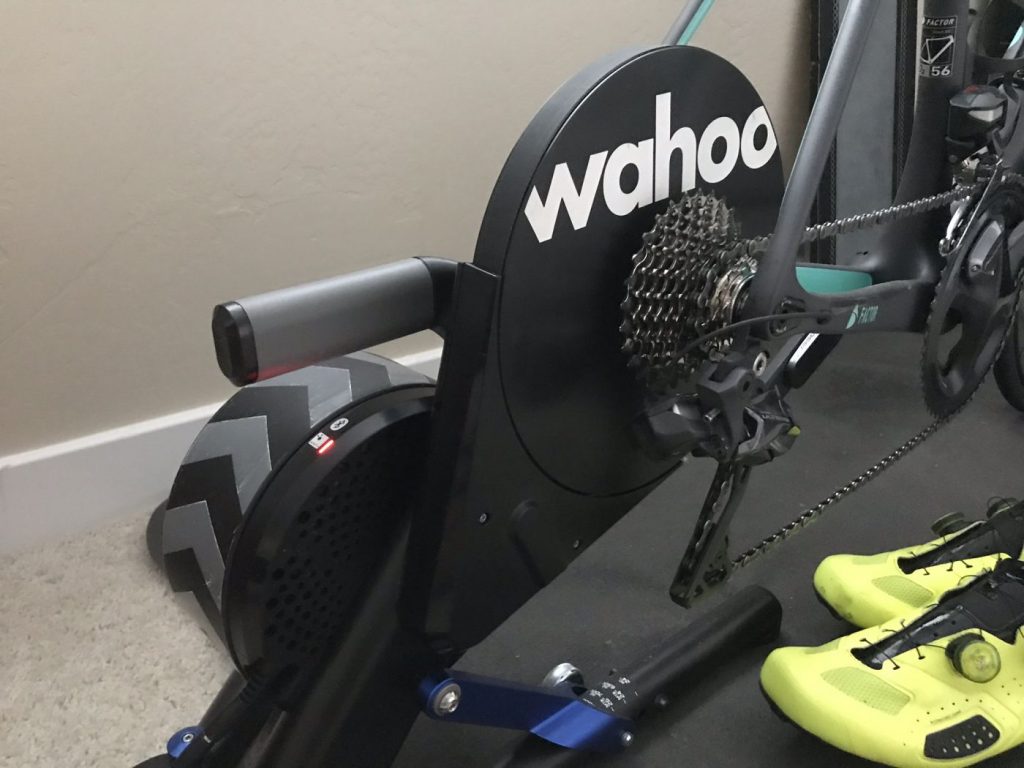 Indoor training has gotten more engaging since Zwift came on the scene. Offseason training used to be monotonous and boring, but thanks to integrated smart trainers, ride simulation is more realistic than ever. To take advantage of these training systems, you need a smart trainer and the quiet and capable Wahoo KICKR is one of the best.

Old-school trainers are good at keeping you on the bike year-round, but their limitations are obvious. On the other hand, direct-drive smart trainers are changing the indoor training game for the better. Yes, it’s an investment, but so is every piece of training equipment. In my testing, the new Wahoo KICKR noticeably changed my offseason training and fitness in a matter of weeks.

As the weather and seasons change, outside time is reduced, but when there is a perfect afternoon in December or January, you don’t want to feel as if you’re stepping back on the bike for the first time. That’s where I’ve seen noticeable benefits as those sporadic outdoor rides have felt as if I haven’t skipped a beat. So, smart trainers are good, but let’s take a step back and talk about the new Wahoo KICKR for a bit.

Upon arrival, it was apparent that the KICKR meant business. My wife could hardly lug the box and I had to take a few power pellets before hauling it upstairs to the new “training cave” in our bedroom. Unboxing was straightforward and the reason for all the girth was immediately apparent. That 16-lb. flywheel is just the beginning as the folding legs expand and the unit was adjusted for the Factor O2 Disc I’d be using with it.

At the end of the legs are adjustable, locking feet to make sure that the entire unit is stable (even on carpet). When you’re putting power down on a sprint finish, stability is critical and the KICKR delivers.

If you’re new to indoor trainers, here are a few things you’ll want to make part of your training cave:

The KICKR ships with a Shimano 105 11-28t cassette and endcaps to fit any modern axles (130/135 QR, 142 and 148). I slapped on the 142 endcaps and mounted up the Factor O2 with ease. And, I was initially worried that my chain length (I run an 11-32t Ultegra) might cause issues, but it has been flawless with my Shimano Ultegra R-8070 Di2 groupset. In fact, electronic shifting not only makes outdoor riding better, but I love it with the KICKR even more.

One of the biggest features of the updated Wahoo KICKR is the silent operation. The unit itself is utterly silent, but don’t expect your drivetrain to be equally quiet. So, all you’re dealing with is the sound of your drivetrain, not the wind-up you get with typical trainers. Since it’s so quiet, I can have a conversation with my wife or kids without raising my voice at all. Further, with the trainer located in our bedroom, my wife has remained sound asleep during early-morning sessions.

I used the KICKER primarily with Zwift, but did do a manual training session using the Wahoo ELEMNT Bolt, just for comparison’s sake. Power, speed and distance are all captured on the Bolt for review, but sitting indoors, that screen is small. In the end, manual sessions are fine and dandy, but you don’t spend $1199 for manual training sessions and one session was all I could muster.

Pairing the KICKR with any device is consistently fast and easy. I didn’t test ANT+, but Bluetooth connects to paired devices (MacBook Pro, primarily) instantly. But, that blinky blue light does get annoying when not in use, so I unplug the unit when not in use.

While my choice for smart training is currently Zwift, there are several other notable platforms including The Sufferfest and TrainerRoad, to name a few. The idea of Zwift seemed gimmicky at first, but I quite like the real-time virtual competition and the varied resistance throughout the changing terrain — it’s about as realistic as an indoor training session can get. Whatever system you use, the Wahoo KICKR will deliver.

Since the KICKR features the 16-lb. flywheel, it’s said to be able to simulate up to a 20% gradient and 2200 watts, which is in the ballpark of the other top smart trainers. I will add that both long, gradual climbs and punchy ones feel very realistic.

Among the current crop of smart trainers, it’s hard to find anything amiss with the new Wahoo KICKR. It is sturdy, offers realistic resistance and connects with any device or training platform on the market. Winter training just got a lot better around here.

Wahoo has nailed the ease-of-use side of things with everything they touch and the KICKR Smart Trainer is no exception. With a solid ride feel and excellent stability, the KICKR does a great job replicating the real thing in the comfort of your (warm and dry) home. The exposed drum is a little bit of a temptation for kids, so keep that in mind. And, the adjustable height has all your bikes covered.