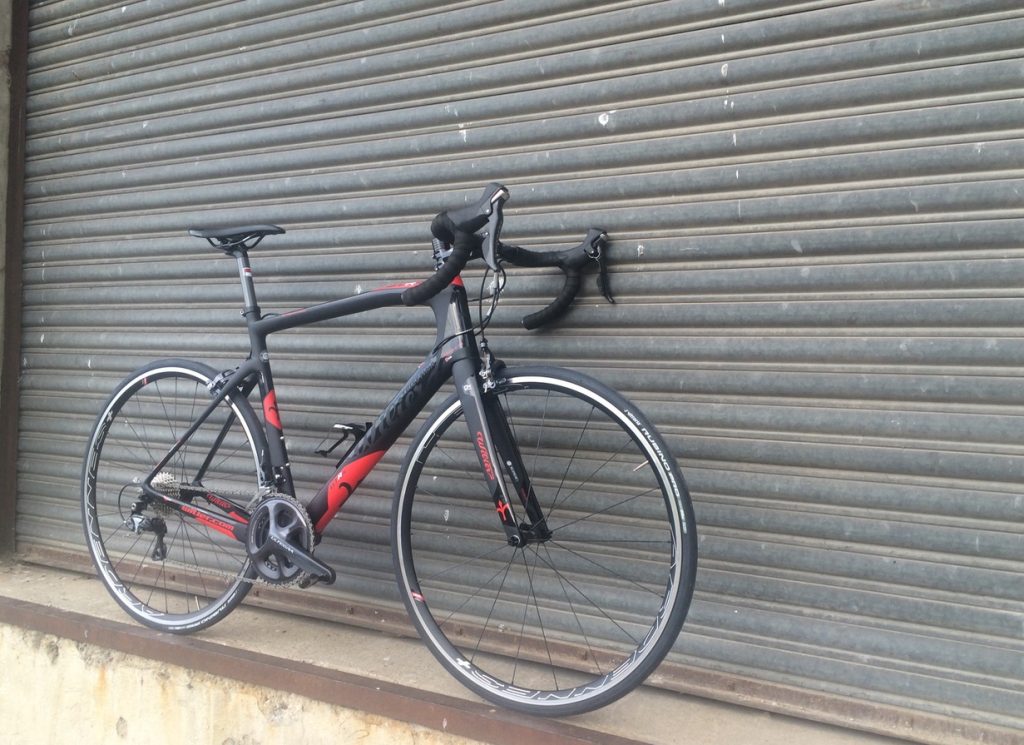 The Wilier GTR SL is all-new for the 2016 model year and aims to be a comfortable, yet racy bike for the bulk of riders. It’s not a nimble race weapon and it’s certainly not a wallowing endurance bike, but it has proven to be something in the middle.

Wilier Triestina has been making bikes for a really long time — 110 years in fact. During that time period, Wilier has designed utility bikes for the military and bikes for some of the top riders in the world. Now, the 2016 Wilier GTR SL is designed to handle the cobbled classics, but it is also perfectly-suited for the majority of us who are looking for a well-fitting bike that inspires confidence on the flats, on climbs and on descents.

The GTR SL is available in both race and endurance geometry, but the latter is the only variation that’s stocked in the United States. You can, however, order a race geometry (lower head tube, longer top tube), should you prefer. As it is, the GTR SL uses an optimized carbon layup for a 990 gram (medium, claimed) frame weight, which is really quite respectable for this type of bike.

The endurance geometry that I tested made for a little tricky fit as I went with the size XL frame (crazy, right?) for my 5’11” body. The stack/reach required that I slam the stem and reduce it from the included 120mm to a 110mm FSA SL-K. My wide shoulders fit best on a 44cm bar, so that’s nice to have here, but the 175mm cranks are longer than my typical 172.5mm. That said, upsizing frames does have some tradeoffs, but when you’re in the bike testing business, you make do with what’s available and I’ve been quite happy with the fit, once dialed in.

The test bike came equipped with a full Shimano Ultegra mechanical groupset, FSA Energy bar/stem, a house-brand carbon seatpost and upgraded HED Ardennes SL tubeless-ready wheels ($1000 up-charge). This is a standard build for 2016 and I’m told it will carry over pretty much as-shown for 2017.

The endurance category has bikes of all sorts from ultra-comfortable to still-racy. As an Italian brand, Wilier remains focused on performance, so the GTR SL leans more on the performance side of the endurance spectrum. I was expecting a bit more compliant ride to go with the lateral stiffness and handling, but found that the best way to get compliance was to reduce air pressure by 10 psi. The HED Ardennes SL’s are ultra-wide, thus spreading the 25mm Vittoria Rubino Pro rubber out into 28mm-like territory. Running at 90 psi, I had zero issues with flats and my lower back appreciated it most.

During the course of my testing, I really came to appreciate the overall feel and performance of this bike. As spec’d, it’s certainly not cheap, but it’s quite affordable for such a stellar all-rounder. And, Wilier is not as common as the big brands, so you won’t see one everyday — I like that.

With an endurance geometry, I had come to think that it would be more comfortable as well. That said, my body position and fit is easily accommodated, but the frame’s built-in comfort is fleeting. Don’t get me wrong, the frame and 27.2mm seatpost do their fair share of chatter reduction, but, as stated, the most reliable way to add comfort is to reduce air pressure. What’s nice about that is that with the HED Ardennes SL’s, you can run tubeless for even lower pressures without worry. Running lower pressures for added comfort is nothing new and other European brands stand by that as the best way to add comfort. Plus, running lower pressures with wider tires has proven to be faster anyway.

Certainly, the GTR SL can climb, sprint and roll on the flats with the best bikes around. I’m climbing quite fast without any steering wonkiness (in or out of the saddle) and loving the way this bike ascends. Short, punchy climbs or long, shallow climbs are equally fun with the right amount of gearing. And, long flats are quite fast with this bike nabbing a few top times on flatter segments. The frame does feature some aerodynamic elements (integrated fork, trailing headtube and truncated aero downtube), so its speed in the flats is expected.

But, what has truly surprised me about the GTR SL is how awesome it descends. I’m not kidding when I say this is one of the best descenders I’ve ridden. There are more nimble bikes out there, but this thing sings on the downhill. Fast, curvy descents in the mountains make this bike come alive.  Try rolling 3000 vertical feet at 40-45 mph and you’ll quickly settle into this bike. It’s way fun and capable beyond its price.

Rounding out the GTR SL’s kit

As tested, this bike included a full Shimano Ultegra drivetrain. Without question, that is the safest, most ubiquitous and most predictable groupset on the market. It’s as pedestrian as it gets, but that’s what also makes it so great. Parts are very easy to come by and extra cassettes and chains won’t break the bank. So, a hat tip for long-term maintenance as repair costs will be minimal over time. And, it also just plain works.

The rest of the kit is a mixture of FSA, HED, Selle San Marco and house-brand components. As far as aluminum handlebars go, the FSA Energy really has a nice feel to it and the SL-K stem (as tested) provided a stiff connection to the front-end. The only real complaint for me is the ultra-uncomfortable Selle San Marco Aspide saddle. Someone’s hind end fits this saddle, but it’s certainly not suitable for mine. I swapped to a Specialized Power Expert saddle after my first ride and the comfort level went up significantly. Certainly, your mileage may vary here as there’s nothing more personal than saddle choice.

If you opt for the upgraded HED Ardennes SL wheelset, you will not be disappointed. They roll quite well (as good as the best rolling wheels I’ve tested) and offer excellent lateral stiffness. They track well and spin up quickly. And, as a bonus, you can run them tubeless, if you wish. However, the included Vittoria Rubino Pro 25’s aren’t tubeless-ready, which is a bummer, but they have delivered excellent road feel in both wet and dry conditions. For comparison, I mounted a set of Zipp 30 Course wheels and found them to perform just as well as the HED’s on this bike. So, drop some psi. and enjoy the ride.

I’m not the only one calling Wilier (and many other brands for that matter) out on the carpet for over-branding their frames. Every feature is spelled out in white lettering many times over — many times over. I don’t understand the need to do that with such a otherwise-fantastic frame.

Wilier is one of a handful of brands that conjure up thoughts of rolling Italian countrysides with just you and the herds of sheep. There’s just so much heritage going on here, you can almost taste it. That heritage has delivered quite an excellent bike in the GTR SL. No, it’s not class-leading in any one category, but it does a darn fine job of excelling in all the areas that count.

The Wilier GTR SL ended up being a surprise in many aspects. No, it's not a cushy bike (surprise), but it is quite a capable all-rounder (surprise) and an absolutely-killer descender (surprise). Knowing Wilier, I guess I should not have been surprised with everything, but the GTR SL is certainly a sleeper in the category that will deliver above and beyond it's affordable price and everyday spec.