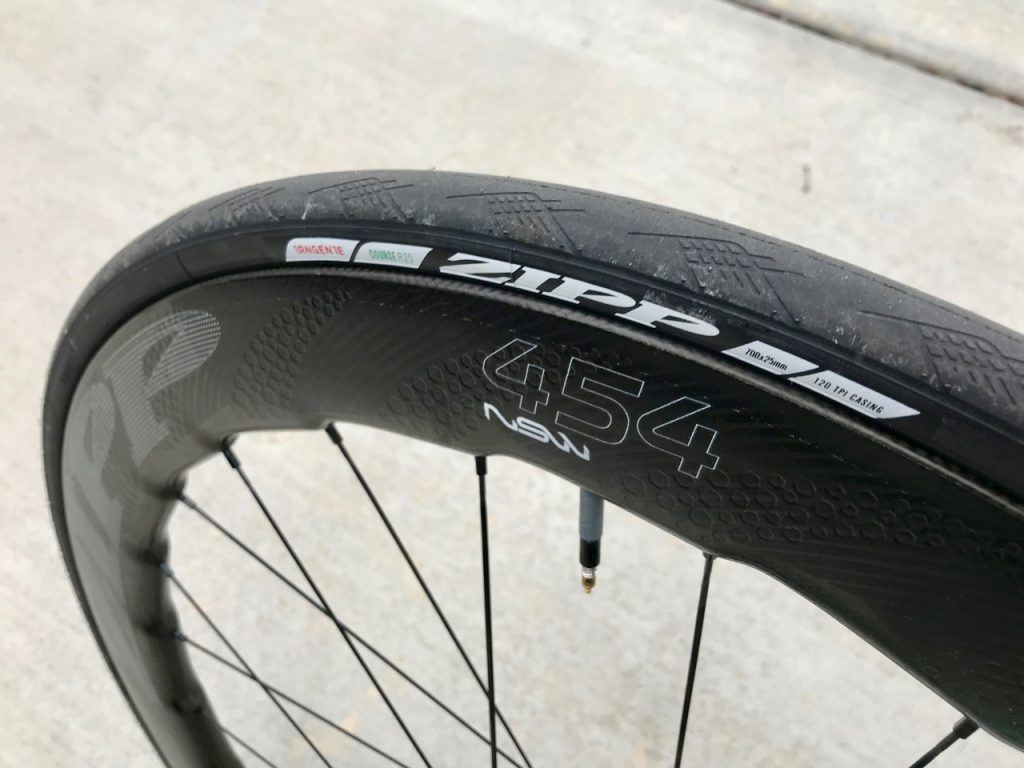 There’s marginal gains and then there’s gains made using biomimicry. Bio what, you say? Well, Zipp engineers looked to nature to inspire their sawtooth 454 NSW wheels and not only do they look amazing, it turns out that nature knows how to win and winning is what the Zipp 454 NSW’s are built to do.

If I told you the Zipp 454 NSW Disc-brake wheelset was just another pretty set of hoops, I’d be lying. If I told you they will cure all your ills and make you sprint like Peter Sagan, I’d also be lying. The truth is somewhere in the middle because for an avid rider, these wheels offer noticeable speed benefits without getting blown around. So, how is this achieved? Whales. Yes, whales.

Zipp looked to nature to get the inspiration for these wheels. It turns out that imitating nature can yield some pretty astounding results. The technical term is called biomimicry and the interior edge of the 454 NSW’s is toothed like you’d find on the trailing edge of a whale’s tail fin. That same slippery efficiency in the water translates into efficiency in the wind and shed wheel-grabbing crosswinds as well as wheels half the depth of the 454’s.

Traditional carbon wheelsets take many hours to build. The layup schedules can be complex, but overall it’s pretty straightforward. Adding Zipp’s Firecrest dimples adds complexity, but the addition of the Hyperfoil nodes and HexFin ABLC dimples makes the construction of the 454 NSW’s more complex than any wheel Zipp has built and are likely more complex than any other wheel on the market. That complexity has taken time to perfect, but the results are noticeable (on the road and in your wallet).

It’s hard to argue against the beauty of the 454 NSW’s as they feature ImPress graphics instead of big stickers and just look amazing. They roll around Zipp’s Cognition Disc-brake hubs with Axial-clutch technology. Axial-clutch utilizes magnets instead of pawls to engage/disengage the drive. It’s an interesting sound while coasting (a bit like a baby rattle). All that magic delivers a wheelset that rolls very, very well.

For me, I’ve felt like Zipp’s 404 wheelsets were too tall for the crosswinds I typically encounter here in Utah. Instead, I’ve gravitated to the 303’s as my go-to choice for all-around performance. So, as I dialed in the 454’s, I was skeptical. Would crosswinds knock me into speed wobble? Would I really notice the added depth on rolling terrain? As anyone should, I was doubting the hype.

Over the course of almost a full year, I’ve outfitted both the BMC Roadmachine 01 and Factor O2 Disc with the 454 NSW Disc-brake wheels. Building both an endurance bike and a Tour de France Podium-winning bike has proven the perfect testing environment to show just how these wheels perform.

Both test bikes are no slouches — fast, efficient and light. But, the Roadmachine is more of a hammer and the O2 is more of a dancer. How did the 454’s perform on these bikes?

Aboard the Roadmachine, the 454’s transformed it from a hammer into a sledgehammer — it’s the best way to describe it. I had previously set PR’s on segment-after-segment of rolling terrain with Zipp’s latest 303 Firecrest Disc-brake wheels. But, with the 454’s, I found the Roadmachine to roll even faster and slice through the wind with increased efficiency. It’s noticeable in the saddle and on Strava. That transformation was a ton of fun as everything felt that much faster and racier.

On the other hand, aboard the O2 Disc, the 454’s didn’t slow this climber down at all. I didn’t shy away from any mountains and never felt as if the wheels were slowing me down at all. At 1600 grams, they aren’t feathery climbing wheels, but I had no issues powering up any incline. And, I always felt like I had just a touch more energy to burn — even when I thought I was fully redlined. So yes, they can climb well, but they really shine on rolling terrain where I bested my aforementioned PR’s I set on the Roadmachine.

Still, I will say that even though these are great all-rounders, if you are truly a pure climber, the 202’s would be your jam.

The ultimate wheelset test for me is how well they handle crosswinds, since they are so prevalent in and around Utah’s canyons. I’d be lying if I told you that the 454’s are completely unaffected by crosswinds,  because they aren’t. You will get blown around in a stiff crosswind, but they feel more like the 303’s in that regard (not enough to be a major concern). Even the strongest crosswinds are totally manageable without worry, even at high speeds.

In addition to rolling fast and having reduced crosswind issues, the 454 NSW’s truly turn any bike into a go-cart. Lateral stiffness is fantastic — even under intense load and high-speed corners. They spin up in a jiffy and hold their speed better than any wheelset I’ve tested. When you’re nearly out of gas, it always seems like the 454’s give you just a tad more energy as they are always willing to match any increase in tempo.

The Cognition Disc-brake hubset is unique with this being the first disc wheelset using them. I tested the first rim brake wheelset using them, the 303 NSW, in 2016. The guts are entirely different from traditional pawls because they use strong magnets to engage/disengage the drive. Zipp claims that they roll faster, reduce friction and last longer, but it is a departure from tried-and-true technology. It has functioned well for 500+ miles here and 500+ miles on the 303’s I tested previously, but I hope it functions just as well for another 2000 miles.

I used the 454 NSW Disc-brake wheels with both Zipp Tangente Course R25 and Pirelli PZero Velo 4S 28mm tires. Both are great options for these wheels, but I gravitated to the Pirelli’s for their supple ride and monstrous grip. The PZero’s measure out to 29mm on the 454’s.

For the ultimate in rolling speed while remaining all-rounder capable, the Zipp 454 NSW’s are the pinnacle of wheelsets. With their unique Sawtooth Hyperfoil nodes, the 454’s stand out by using biomimicry to achieve the crosswind stability of shallower wheels. I’ve used these as flatland crushers and mountain climbers and they only made me faster. But, in spite of that noticeable performance boost, there’s no shaking the fact that these are $4000. If these are in your wheelhouse, you’ll love them aboard the superbike of your choice.

With the 454 NSW Disc-brake wheelset, I always felt like I had one more gear. They simply fly on rolling terrain and won't hold you back on extended climbs. Crosswind stability is on par with shallower wheels and I've got to admit it... they look bonkers awesome. If you can afford them, these racy wheels are astounding in every way.