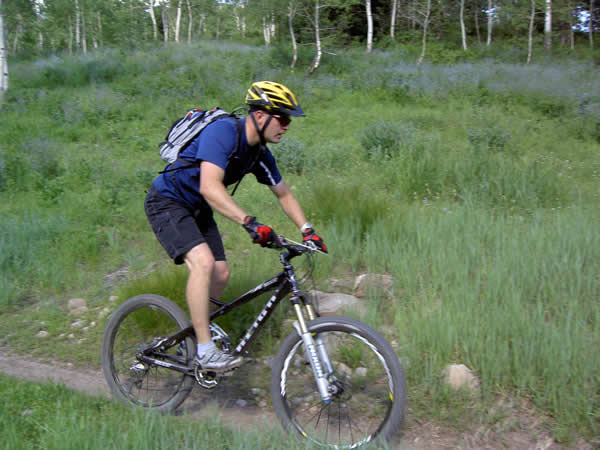 Giant Bicycles has been building quality bicycles since 1972, and been delivering those bikes to our shores since 1987. Along the way, Giant has garnered a powerful reputation in the road biking scene with their svelte and sturdy carbon framesets. Over the years, they have also begun tinkering with new mountain bike suspension designs and have designed one of the most sought after downhill frames on the market. A few years back, Giant introduced the NRS suspension design, which provides hardtail performance, but squish when it’s needed. And, new for 2005 is the Maestro suspension line, which consists of the freeride Faith, the all-mountain Reign and the cross-country Trance.The Maestro Suspension design is built around a dual linkage design (similar to a VPP bike) that successfully isolates pedaling, power and braking forces, while delivering seemingly bottomless travel. This suspension design promises an efficient, plush and smooth ride in all conditions.

About the Giant Reign 1

The Giant Reign 1 is the flagship trailbike in the Giant lineup. Using the new Maestro suspension design, the Reign 1 gets 6 full inches of suspension travel via an ultra-smooth Manitou Swinger 3-way air shock. These shocks are deservedly standard fare these days… I’ve been impressed with its performance both on this bike and the Cannondale Prophet 1000 tested earlier this year.

Of course the top-of-the-line Reign 1 comes decked out with all kinds of top shelf parts. The suspension up front is handled by the all-new Manitou Nixon Platinum fork. This fork offers a plenitude of adjustments and one nice feature… on-the-fly suspension travel adjustment via a thumb trigger that’s mounted on your bar. The hoops are Mavic Crossmax XL tubeless and Shimano Deore XT/ RaceFace handle all the shifting and control items. Overall, it’s a well-chosen parts spec for a trailbike of this caliber.

Bike weight tips the scales just over 30 lbs., which is respectable for a bike with so much suspension and complicated suspension design.

Giant Reign 1 On The Trail

Right off the bat, I swapped out the bar/stem combo for a shorter stem and taller rise bar/stem. My trusty Titec El Norte riser bars and 75mm stem are my choice for the right overall cockpit feel. Even after forking out $3300, you will want to adjust things to your liking as well. My pedals of choice are the Crank Brothers Mallet C’s. Once dialed in, the Reign 1 was hauled to some nice, windy singletrack ascents. After initial adjustment of the fork and rear shock, I realized that it may be a ride or two before I had everything just right. The first ride is always the bug fixing ride with every bike. You just don’t know how everything is going to feel until you get on the trail. Luckily, I toted the shock pump to make slight pressure adjustments on the trail.

The climbing abilities of the Reign 1 are superb. The Maestro suspension design stays calm and smooth over all terrain–thus keeping your rear wheel firmly planted on terra firma. In short, the Maestro is similar to the Virtual Pivot Point (VPP) design made by Santa Cruz and Intense. This design makes the bike feel much more stable in all conditions with a solid pedaling platform and enough squish to tackle any terrain. The Reign feels nimble and light on the climbs and seemed to climb best with the travel lowered about an inch. Anything more than that, the weight distribution got out of whack and I felt like all my weight was on the front wheel. It felt like the happy medium was to adjust the Nixon down to about 120mm travel. In this setting, I noticed only minimal front end wander even on short, steep sections.

A word on the Intelligent Travel (IT) adjustment on the Manitou Nixon. The thumb trigger is great for slamming down the fork on the fly. I found it easy to hit the trigger and reduce the travel an inch or more. It’s just as easy to slam the fork down if desired, but I found that unnecessary on the Reign. However, when the going gets fun (i.e. downhill), returning the shock to the full travel setting wasn’t so easy unless the thumb trigger was placed in between the shifters and brake levers. I hesitated to place it there, because it spreads everything out and gets in the way, but that’s the best place for it if you want to be able to extend the travel back on the fly.

With the travel adjusted properly, the Reign 1 climbed exceptionally well. I found that the right cadence enabled me to clean just about everything in sight. Once I got into a groove on long climbs, I felt like I always had that extra little bit underneath me just in case the trail steepened or I came across a section of erosion bars. The Reign was always there and always ready to tackle any obstacle. I did notice that the bottom bracket was a bit low, however, as my pedals hit rocks and roots I thought I’d clear. This low bottom bracket does help the Reign’s cornering abilities on those buttery descents.

Downhill on the Giant Reign 1 was great fun overall. The rebound adjustment knob on the Swinger Air shock became my best friend as I’d slow the rebound for the downhill portion of the show. The Reign handles well at speed, but did get a little twitchy on super high speed sections. A lot of this had to do with the Hutchinson Mad Dog tires, which left something to be desired. Their soft and thin sidewalls combined with a narrow tread failed to dig properly on hard corners. The beauty of UST tires and wheels is the ability to lower the pressure without fear of pinch flats. The Mavic Crossmax XL wheels were solid and stable with no noticeable lateral flex–even when pushed hard. Tubeless setups are great overall, but I do dread the day that I do have a flat and have to change it on the trail. The nice thing is that you can just slap in a tube and you’re on your way–leaving the tubeless repair for later. But, the chance of getting a flat is reduced with a UST setup, so flats will be few and far between. 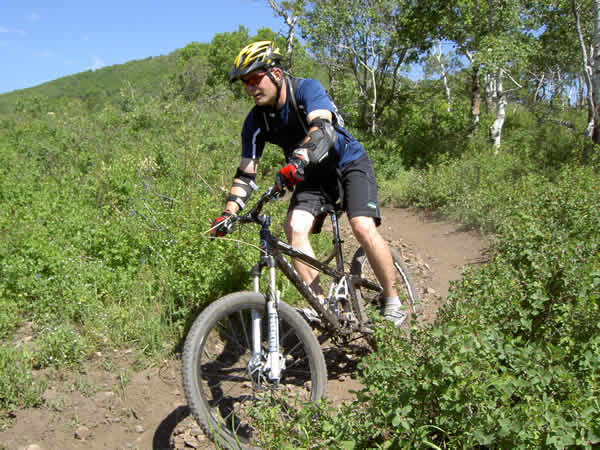 The drivetrain performed flawlessly as the Shimano XT triggers and derailleurs quickly got me in the right gear. The rear derailleur was a Rapid Rise version for instant downshifts without grinding. The concept is great and once you get used to the reverse shifting setup, the execution is nice too. Shimano should downplay the wacky Dual Control levers in favor of their standard triggers with Rapid Rise in my eyes.

Braking performance was superb with the Hayes Nine Carbon brakes. I don’t know if it’s because the levers are carbon or if the internals are that much different, but the modulation on the brakes was much better than any pair of Hayes brakes I’ve ridden. They weren’t just on/off, but more variable based on how hard you squeezed. I also preferred the feel of the carbon levers over the standard aluminum styles.

Another word on the Manitou Nixon fork. After only a couple of rides, the bushings began to develop a little slop. I kept adjusting and tightening the stem and headset stack thinking I had somehow developed some wiggle room in the stack. But, after tightening, the movement continued and I began to suspect the fork’s internals. Then, right in the middle of a long ride up American Fork Canyon, the fork went from a little bit of slack to alot of slack and loud clanking every time the fork topped out. I was bummed because I ended up riding the bike very gingerly down some of my favorite downhill singletrack. Apparently, Manitou has had several problems with the Nixon OEM fork. I’m not sure what the solution is, but this Nixon has been impeached from my singletrack office.

In spite of the ill-fated Manitou Nixon fork, the Giant Reign 1 is one of the top trailbikes I’ve ridden this year. Had the fork performed flawlessly, I would give the Reign 1 the top spot. The Maestro suspension design is so smooth and efficient in all conditions… it’s downright amazing. And with six FULL inches of rear travel, it soaks up everything in sight. Word is that next year’s Reign 1 will come with another more reliable six inch trail fork. If you’re looking to get into a Giant Reign on the cheap, the Reign 2 and Reign 3 models both offer the exact same frame and shock, but with different forks and components. The bottom line is that the Maestro platform on the Reign series offers the best all-around performance for your money. But, if you’re set on getting a Reign 1, I’d wait for 2006… it’s not too far away.

Visit your local Giant dealer to purchase a Giant Reign 1.