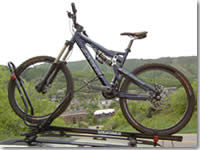 In the seesaw battle between upright bike rack supremacy, Yakima struck first with the innovative King Cobra upright bike rack design. The design seemed simple at the time, yet was so welcome in a world of mandatory wheel removal bike racks. Yakima had run the gamut of upright bike rack designs from the venerable Lockjaw to the flexible Anklebiter, but neither of those designs could safely transport a bike of any size, shape or design with ease–they each fell short of the prize. Now, the King Cobra stands at the top of the heap ready to tackle any frame and any bike type.

The Yakima King Cobra bike rack was developed to carry bikes of all types and sizes with ease. I remember the first time I saw the King Cobra at Outdoor Retailer, I was impressed with the flexibility and ease of use of the design. At the time, I had been using a Lockjaw to hold my Turner RFX and had just purchased an Anklebiter. Truthfully, the Lockjaw worked well, but was limited to standard-tubed bike frames only and I really didn’t like the anklebiter because the lever arm was big and bulky to move around and didn’t seem all that secure in the long run.

The King Cobra, however, is a complete departure from earlier Yakima bike rack designs. Stabilizing the bike by the front wheel was something that hadn’t been done by any major bike rack makers to date and Yakima would be first to market with this new design.

The rack consists of a standard gutter-style tray attached to a solid chunk of metal upon which the wheel stabilizing arm and cradle are attached. A nice feature is the cable lock that’s built into one side of the King Cobra’s wheel cradle tube. The rack is built to handle all wheel sizes from 20 to 29 inches and everything in between. It is also built to accommodate up to 3.0 tires and any style frame you can throw at it.

Installation of the Yakima King Cobra on my Thule square crossbars was a cinch. The only modification needed is to cut out the round bar grips found on the U-shaped plastic bar attachments. Once cut, the King Cobra installed in about 10 minutes. The steel plate that stabilizes the front loading arm and stabilizing wheel cradle keeps everything on a sure footing. I had no worries about the strength and durability of the King Cobra.

Loading bikes on top isn’t quite as easy as other designs and takes some getting used to. With most bike racks, you simply load the bike right where you want it to go, secure it and you’re done. Well, with the King Cobra, you have to place the bike back on the tray a couple of feet from its final resting place, then roll it forward into the front wheel cradle–making sure that the bike stays upright enough to shoot the gap between the front wheel arms while the rear wheel is well off the back of the tray. This process really isn’t that bad for 30 lb. bikes on shorter rooflines. But, if you have a heavy bike or have a taller roofline than my Subaru Outback, this process could be difficult. It’s one of those things though… once you get used to it, you’ll figure out a system that works best to get it on top and securely in the rack.

Once loaded, there’s a small red knob that pulls out of the front of the wheel cradle and swings below the steel plate to properly tighten up the grip on the front wheel. This knob sufficiently allows you to tighten the front arm and wheel cradle around the front wheel for a vice-like hold that’s superior to other racks in this category (Thule Super G and Sportworks Bob Ratchet). Though this tightening knob has small ridges on it that enable you to crank down on it well enough, it would be helpful if it were more “T” shaped with small arms that would enable you to provide more leverage.

The included cable lock is located inside one side of the wheel cradle tube. It’s just long enough to wrap around the down-tube and back to itself. If you have a traditional frame, this lock will work well, but if you have a monococque frame design, you may have issues finding something to wrap the lock around and back to itself. An SKS lock core isn’t included with the King Cobra and must be purchased separately.

Where the King Cobra shines is overall stability. In a very scientific head to head “rock the car back and forth” comparison between the Thule Super G and the Yakima King Cobra, the King Cobra kept the bike more stable and didn’t rock excessively back and forth. That extra stability is no doubt due to the burly steel plate that’s attached to the front crossbar. Taking the King Cobra on washboards and bumpy dirt roads, I had 100% confidence that my bike was going to stay on top of my vehicle. Granted, you still have to be careful when driving off road because of the sheer leverage a 35 lb. bike puts on the rack, but the King Cobra provides a stable platform for even the heaviest of bikes.

The Yakima King Cobra is the winner in the upright bike rack category for overall stability and ease of use. It gets a slight edge over the Sportworks Bob Ratchet simply because it includes a built-in lock. The only gripe I have with the King Cobra is that you have to place the bike way back on the tray, then wheel it forward into place, which can be difficult on tall roofs or with heavy bikes. Once locked and loaded, the King Cobra provides a secure perch for any bike you can throw at it. Overall, the King Cobra gets the nod for the most stable and functional upright bike rack on the market.