Pippin Osborne and the crew at Banshee Bikes have been hard at work this year–testing bikes as usual. Although this time, their extensive testing has given birth to an entirely new bike in the bombproof Banshee lineup. Introducing the 2006 Banshee Pyre in all its glory. We were offered exclusive photos of the Banshee Pyre by the man himself. Go ahead… drool away!

The 2006 Banshee Pyre utilizes a virtual 4-bar suspension inspired by the VPP design. The frame features adjustable travel between 4.3″ and 5.5″ of squish to eat up any terrain on your epic XC or freeride adventure. And, the headtube on the Pyre is stout enough to handle a 7″ fork! Check out your new bike lust for 2006: 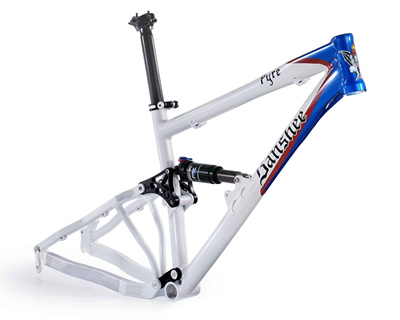 I’m also told that Banshee will introduce several other bikes into their lineup for 2006. Look for more from the boys up north shortly! And… look for a full review of the Pyre this Fall!