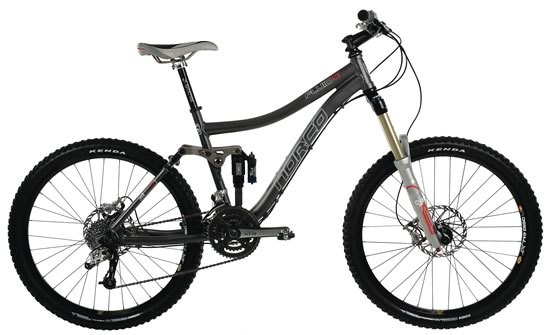 So, after riding the Norco Fluid 1 for the 2007 season, I thought I had found the perfect mix of light weight, smooth travel, efficiency and all-around performance. Shortly after posting the review of that bike, I get a call from Norco talking up the release of the 2008 line at Crankworx 2007 in Whistler. Unable to attend the event, I had to wait until the press kit arrived in the mail, but once it did, the all-new Fluid LT 1 caught my eye. This bike looks SICK!

Read my review of the Norco Fluid LT 3…

Initial specs on the Norco Fluid LT1 are as follows:

I’m stoked on this new addition to the Norco all-mountain lineup. Rocker-arm FSR suspension designs are by far the most efficient and best handling framesets available today. I’ve ridden a ton of bikes and a ton of suspension designs, but nothing I’ve ridden competes with the overall functionality offered by a true FSR rocker-arm design. My all-time favorite bikes are all rocker-arm FSR’s: 2002 Turner RFX, 2007 Ellsworth Moment and now, quite possibly the 2008 Norco Fluid LT 1.

Other Options for the Working Man

Check out the nicely-spec’d and still affordable Norco Fluid LT 2 ($2999 USD) and Norco Fluid LT 3 ($1999 USD) for less high-zoot and more bang-for-your-hard-earned-buck workhorses for those without $5k to spend on a new bike. These are still nicely equipped and ready to rip.

Stay tuned for more information on the 2008 Norco lineup including a review of the Fluid LT 1. And, head on over to Norco.com for the full Fluid LT specs and information.