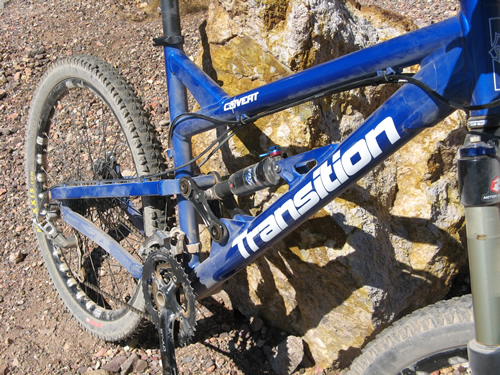 I’ve had my eye on the crew at Transition Bikes for several years as they have grown the company from a backyard side-gig to a full-time operation. So, I spent some time at their Demo tent chatting with Kevin Menard, co-founder of Transition Bikes, which started in 2002. Transition is “rider owned”, which to me means that these guys design, market and ride the bikes they sell–and they are super cool guys not caught up in the mayhem that can typically surround the bike biz.

As I said, I spent a few minutes finally putting names with faces as I had contacted both Kevin and other co-founder, Kyle Young, over the years. These guys were super chill and fun to chat with as we went over the industry, their company and more importantly, their bikes. Every bike they had was out on the trails except for a couple of Covert all-mountain rigs. The fact that the only two bikes available were both Covert’s was was pretty ironic actually. He then said the Covert was the bike they were riding here in Bootleg Canyon in their off-hours. He felt it was the perfect bike for the rocky and windy singletrack featured here in the desert. 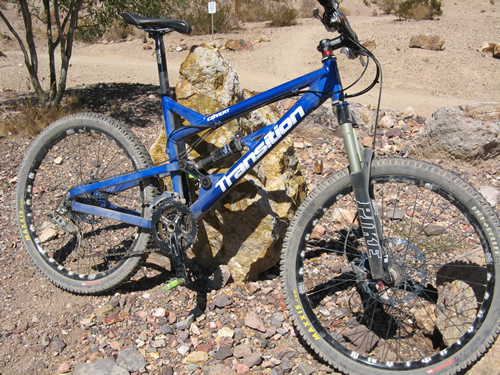 I was intrigued for sure as I wondered why everyone was riding other bikes in the line when the boys at Transition were hammering the Covert on their own time. So, a quick pedal swap and some minor adjustments later and I was spinning uphill.

Quick Review of The Transition Covert

As with the best bike of Day One (Yeti 575), the Transition Covert was the last bike I rode on Day Two. Yeah, I was tired, but not worn out enough to turn down a ride on a bike like the Covert. Since most of the bikes in the Transition lineup are targeted towards aggressive freeriders or dirt jumpers, I didn’t know what to expect with the Covert. Would it be more of a freeride sled or a wonky version of an attempted all-mountain machine? Hold on, let me step back here…

On the climb, I was immediately impressed with the way the Covert ascended. The back-end was super responsive–with all energy getting immediately translated into forward motion. The whole package just felt right and the traditional 4-bar linkage didn’t disappoint. Decked out with the best overall air shock in the industry (Fox Float RP23) and one of the best all-mountain forks ever made (RockShox Pike 454), the squish at both ends was supple, smooth, responsive and efficient all at the same time. Overall climbing ability on this bike is awesome and on-par with the best trailbikes of today. The geometry on the medium felt perfect overall (I’m 5 ‘ 10 “)… not too slack or steep, but just right in my mind. The wheels (TBC Revolution wheelset) and tires (Maxxis HighRoller 2.35) were perfect for all-mountain–none of this squirrely XC stuff that you may find on other bikes. 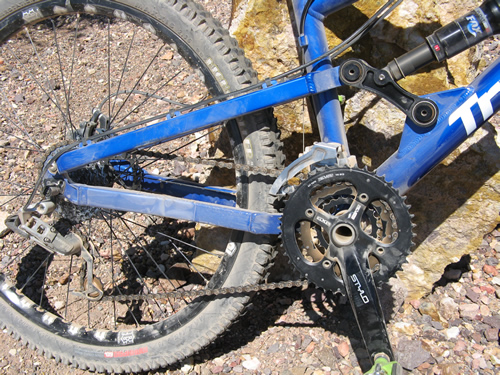 After a quick 15-minute spin up the canyon, I pointed the Covert downhill. As expected from Transition, the Covert rallied the singletrack with the best of them. Rocks, drops, technical corners and everything else in sight were no match for the Covert. I really liked this bike right off the bat and was completely taken off-guard by its versatility and all-mountain prowess. It was definitely one of the top bikes ridden at the demo and for sure one of the best all-mountain bikes on the market. 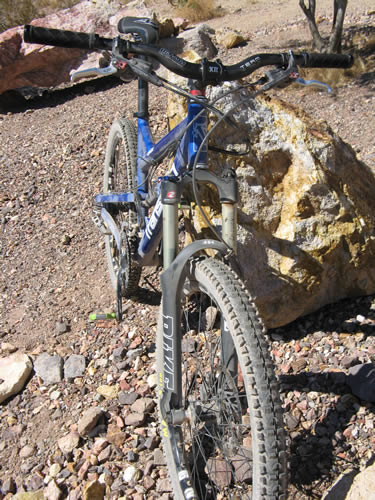 The rear triangle is a compact 4-bar design with stout tubes and linkages–these guys definitely know how to make a burly freeride bike, so the Covert takes a few design cues from its longer-travel brethren. It sports 5.5-inches of squish, which is just the right amount for a trail sled. I don’t know a whole lot about the engineering behind the suspension design, but I do know that it super solid in all conditions with absolutely no lateral flex whatsoever.

The only drawback I saw was the minimal shoe clearance with the straight and square seat-tubes. I never hit my heel on them, but looking back there made me wonder if I would at some point–something I’ve never really noticed on other bikes.

On top of the great ride quality, the Covert also looks amazing. The beautiful electric blue paintjob combined with stout, but not overbuilt tubes and gussets created a great looking bike to match the on-trail performance.

I can comfortably add the Transition Covert to my list of the top all-mountain rides for 2008. The smooth suspension soaks up everything with seemingly-bottomless travel while still remaining efficient enough to pedal uphill with the best of them. Transition is a great, rider-owned company that will stand by their products 100%. If you’re in the market for an all-mountain, do-it-all bike, you won’t be disappointed in the quality and price of the Covert. The frame-only starts at $1209 and a complete bike can be had for right around $3000.