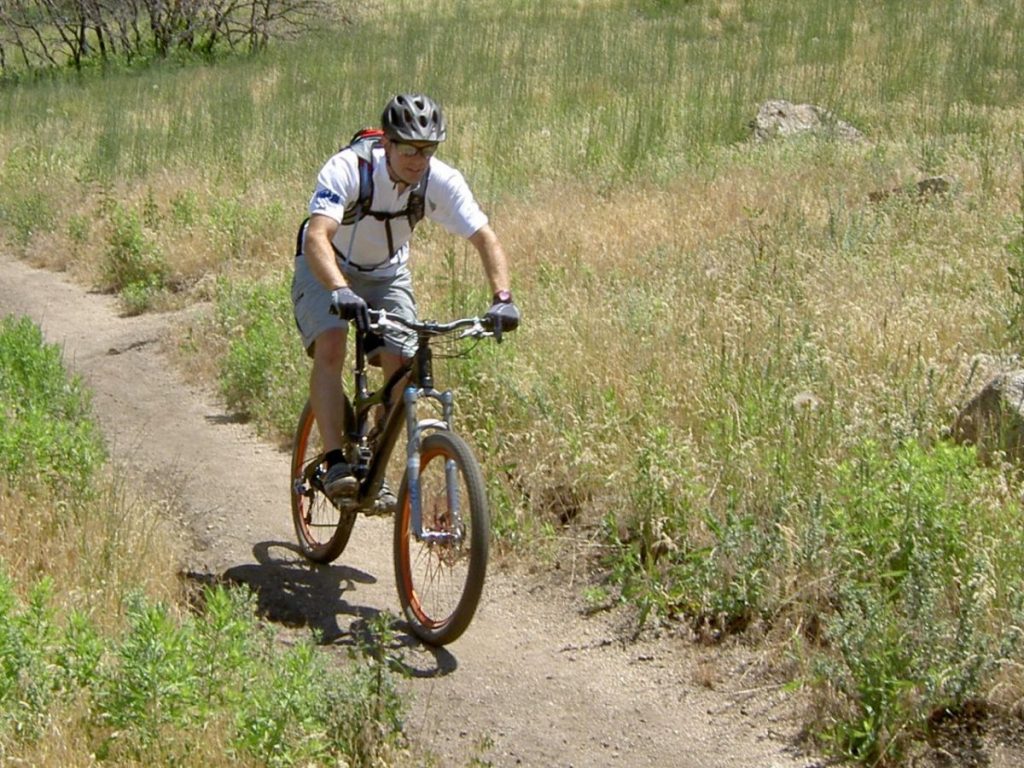 It’s not very often that I’m blown away by a new bike, but it happens on occasion. Take the Intense 6.6, for example. When introduced, it was one of my favorite bikes. Then came the Ellsworth Epiphany, Yeti 575 and the Niner RIP 9. While those are all great bikes, the endless march continues for the best trailbike on the market.

As additional boutique bike manufacturers have adopted the much-heralded DW-Link suspension design, the praise has followed. But, only one combines full carbon with the DW-Link and that’s the Ibis Mojo. The DW suspension platform lives up to the hype–no question. So, would the carbon/DW combo prove to be the silver bullet? Locked and loaded, I was bent on finding out the answer to that question with a custom-built 2010 Ibis Mojo.

Since its introduction in 2005, which also ushered the return of Scot Nicol to Ibis, the Mojo has won many awards as well as the hearts of a faithful crowd over at MTBR.com.  Outside Magazine has gushed over it and so have most of the mainstream mountain biking publications over the past 4 years. The fireplace is adorned with everything short of an Oscar, I guess. And to top it all off, the vibe at IbisCycles.com is witty and a bit irreverent, which adds to the fun of the brand.

The standard Mojo is built from head-to-toe in the latest in high-modulus carbon fiber with smooth lines and available in five colors. Here are a few more specs: 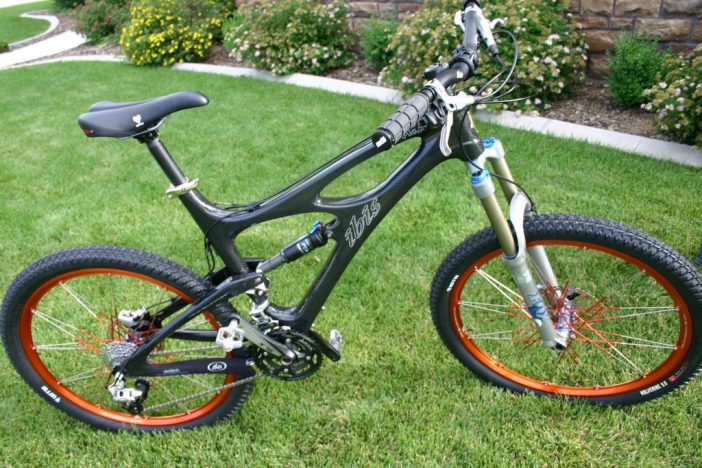 Upon arrival, the Mojo had a set of Crank Brothers Iodine wheels, a 2010 Fox 2010 32 TALAS fork and a complete SRAM X.9 group waiting in the garage to complete the build–solid parts to adorn this carbon beauty. I ended up with the clear black color frame (after waiting a few weeks for the Guiness Foam), which in the end looks to be the best choice in combination with the burnt orange wheels… it’s a looker both on and off the trails.

The complete build was performed by the crew at Timpanogos Cyclery in Pleasant Grove, Utah. Not only did they do a great job, but they turned it around in an afternoon in rockstar fashion. The mechanics were stoked to build up the Mojo and had the final weight waiting for me upon arrival… 26.5 lbs.! I knew it would be light, but not that light! I’m confident if I carbon this thing out, it would easily drop below 26 lbs. 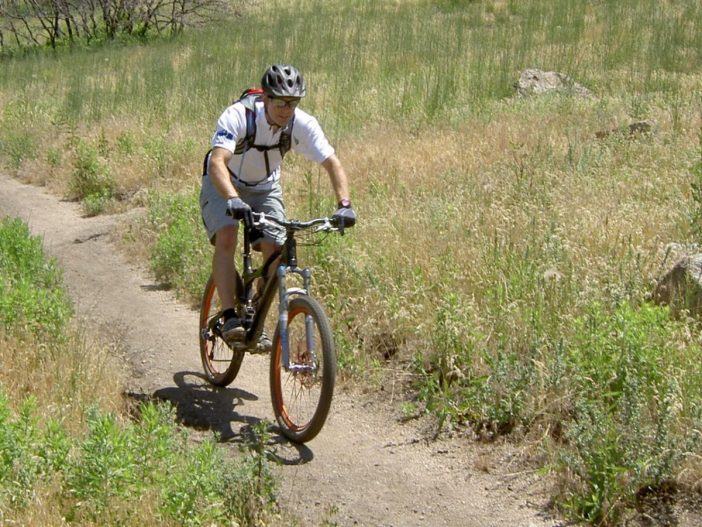 Once built-up, I couldn’t believe just how absolutely sexy this bike was. After a photo session suitable for a fashion model, I was this close to keeping it hanging in the garage a few more days just to enjoy it, but alas… the trails beckoned.

After looking through the included Owner’s Manual (yup, I actually read parts of it) for suggested rear sag settings, I settled on 15mm sag for my weight (175 lbs.) and riding style (everything, everywhere, all the time). That put me at 140 psi., which has turned out to be perfect for both XC and AM riding. The front fork took a little more fiddling to find the right air pressure, but in the end I’ve settled on 80 psi. For the first few rides, you may want to be sure and take a shock pump along as you fine-tune the suspension to your liking.

Above all, I keep coming back to the light weight of this bike as built. My goal was not to build the lightest bike, but this is by far the lightest all-mountain bike I’ve owned and it is absolutely amazing how much of a difference dropping a couple of pounds can make.

OK… once I got past the ooo’s and aahhh’s of the bike and its light weight, I was bent on finding its weak spots on the trail. I’ve now ridden the Mojo on a variety of nearby trails–from high-energy XC burn-fests to thousand-foot climbs and on down fast and technical descents. Nothing fazes this thing.

In all conditions, the DW-Link suspension provides super-efficient pedaling performance. Climbing traction is awesome in all conditions with the only weakness shown in the tire traction at times on steep, rocky pitches. The entire rear-end stays steady and smooth under occasional hard pedaling and digs in for fast power transfer throughout all types of steady climbs. The occasional standing climb does blow through the travel a bit more, but traction is maintained.

When pointing this bike downhill, the suspension really shines. I love how well it soaks up obstacles and adapts to varied terrain. Rock drops and jumps are no match for this bike as it launches with ease and lands with bottomless comfort. The suspension ramps up well with consistently smooth resistance–making the 5.5″ of travel feel like more. I’m sure the new 2010 Fox RP23 with Boost Valve that I’ve been riding improves the downhill performance over the 2009 model, but I didn’t have a 2009 model shock on this particular bike for a direct comparison. All I can tell you is the new 2010 RP23 is perfect on this bike.

Like all full-suspension bikes (except full-bore DH rigs), there are some small bump compliance issues where you can feel the rear end bouncing on rutted or rocky downhills, but it’s acceptable and forgetful considering how well this bike performs otherwise.

I’ve found the 2010 Fox 32 TALAS 150 with 15QR to be the perfect fork for this bike. Without question, the adjustability of the TALAS system makes this bike even more versatile, but if you’re running short on cash and have to settle for a 140mm or 150mm fork without travel adjustment, you won’t be sacrificing much. At full 150mm travel mode, this bike climbs with minimal wander and descends with confidence. Dropping it to 130mm slightly reduces front-end wander and makes for a little speedier handling (excellent for XC-style romps). 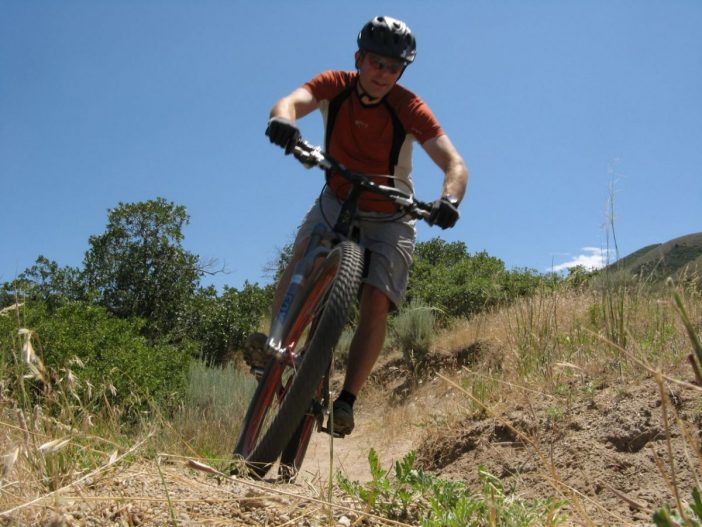 Some may question the durability of carbon fiber, but throughout my tests, this bike has felt absolutely solid with no perceptible flex or weakness. Like any bike frame, a hard crash may require inspection by a mechanic, but carbon frames can in most cases be repaired easier than aluminum or steel tubes.

An email from Scot Nicol yielded a bit of the thought process behind selecting carbon fiber for the Mojo:

“When we first conceived of the Mojo back in ’03 or so, one of our biggest questions was about the acceptance of the material. We rolled the dice and went for it. At first there were a lot of questions about it. But once people got some time on their Mojos and reported back on MTBR and places like that, the acceptance became less and less an issue.

Now we’ve got guys like Brian Lopes riding it, and all you need to do is look at the video we’ve posted (go full screen) on the Lopes page on our website, and that should make a bit of a believer out of you.”

I opted to mount the Crank Brothers Iodine wheels on my Mojo and they have been the perfect wheelset for this bike. I suppose if you wanted to save 363 grams, you could go with the Cobalt’s, but the lateral stiffness, quick engagement and worry-free performance has been a perfect match for the Mojo. Leaning hard into the corners, the Mojo just carves with ease and the wheelset provides just the right stiffness to maintain a consistent trail feel. The Mojo SLX is now shipping with Ibis wheels, which look solid and offer 9mm, 15mm and 20mm axle compatibility out of the box. 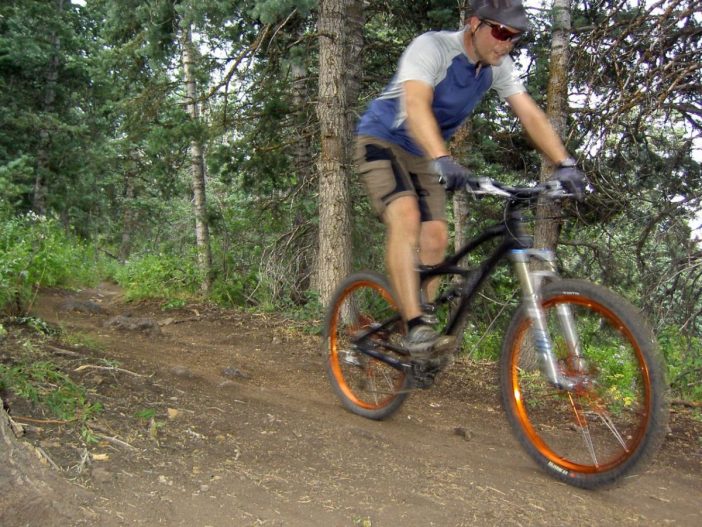 I’ve had more fun on the Mojo than on any other bike I can recall to date. It’s versatility is really unmatched (adding an adjustable-travel fork adds to that) and its overall efficiency just screams to be ridden and ridden hard. I love pounding out XC terrain and flying through twisty singletrack one day and then pushing the limits of my lungs and the Mojo on high-altitude climbs the next day. It is a consistent and comfortable performer when gravity takes over and always seems to glide through all types of sketchy terrain. 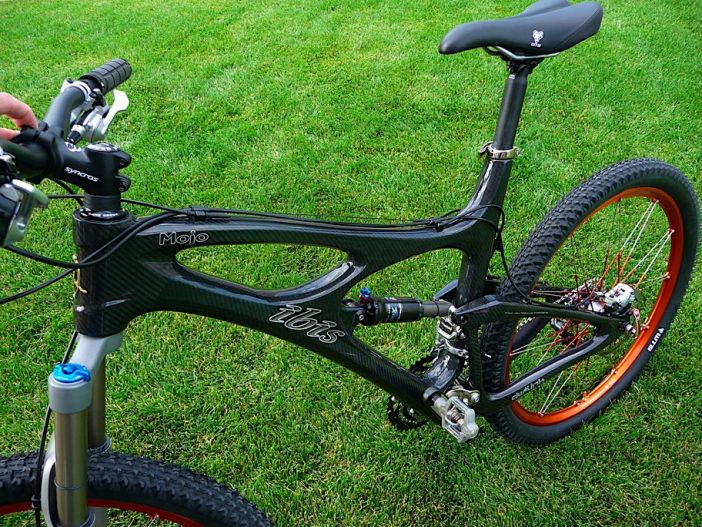 It’s hard not to gush over this bike. Superlatives like “best ever” and “bike of the year” are said with care because the overall feel of a bike depends on riding style and terrain, but I will step out on a limb and call the 2010 Ibis Mojo the most fun, most versatile and most capable mountain bike I’ve ever owned or ridden. The custom build I’ve got isn’t cheap, but you can get a similarly-performing bike for $3000 with the Mojo SLX kit and upgrade as needed. I can say with confidence that you could not make a better choice for true all-mountain performance.

Buy Now: Get an Ibis from CompetitiveCyclist.com