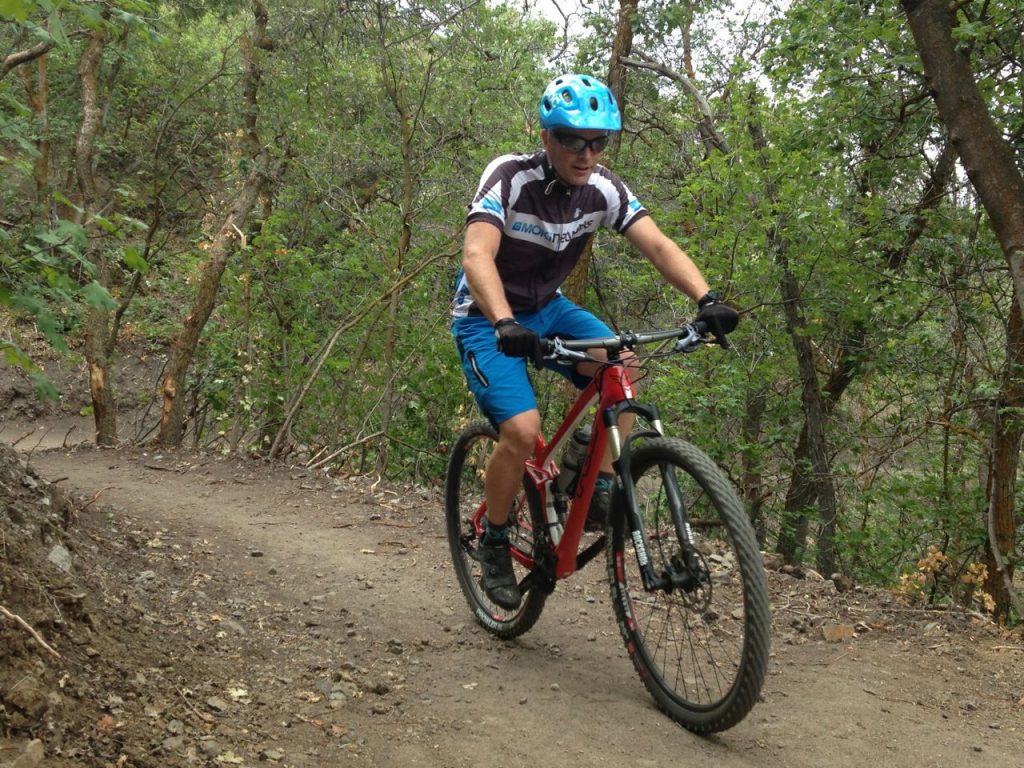 Felt’s first foray into full-suspension 29ers took awhile. For 2013, the Edict Nine platform offers a XC race-worthy and trail-friendly package with a nearly-insane starting price of $3629. For that price, the Edict Nine 3 includes a UHC Performance carbon fiber frameset that’s built out respectably for the money.

After a weekend with the Edict Nine 3 in last October, I knew I wanted to have one for a long-term engagement. It took a few months, but I’ve now had this one in the stable since June with plenty of miles and lots of vert under its belt. As mentioned, the Edict Nine platform is Felt’s first foray into full-suspension 29ers. After making loads of aluminum and carbon 29er hardtails over the years, it was about time they employed their expertise into a full-susser. In the end, the wait has been worth it as the Nine 3 is quite the package.

Lets start out with the frameset. The Edict Nine 3 frameset is the same UHC Performance carbon frame as the one found on the pricier Nine 1 model, but at a more affordable price. What you get is a variety of journeyman parts that function well and can be replaced or upgraded over time to reduce weight and/or improve performance. 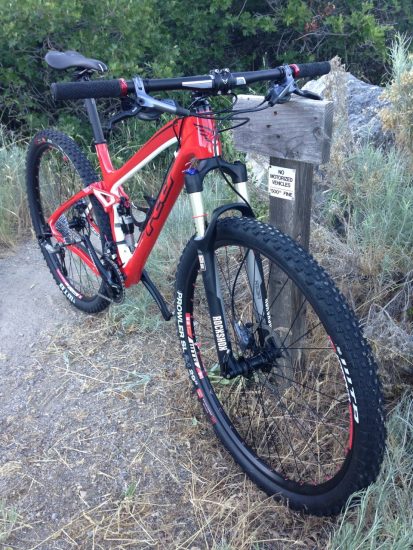 Out of the box, the Nine 3 tips the scales just over 28 lbs. The mixed SRAM X.9 and X.7 2×10 drivetrain gets the job done, but isn’t flashy. It has provided reasonably-responsive shifting that is on par with what I’d expect from this class. I did have to fiddle with things a bit more than I do with SRAM’s more expensive offerings, but at this price, it’s acceptable and continues to shift well enough that I pay it little mind.

After a few rides completely stock, I knew that I would prefer a wider carbon bar, so I swapped out the stock bars for a set of Truvativ Noir T30 carbon flat bars. The extra width and vibration dampening offered a more refined ride and remained in place for the bulk of my testing. Aside from that, nothing was changed from stock. Since most riders have a preferred set of bars, this change really added to the overall feel and comfort of the Nine 3 and put me in a more normal body position to take advantage of everything the Edict Nine has to offer.

Suspension setup was straightforward with not much to fiddle with. The Rockshox Reba RL features Solo Air, lockout and rebound dampening and the Rockshox Monarch R features Solo Air and rebound dampening only. I settled in on about 100 psi up front and 150 psi in the rear to suspend my 170 lb. rider weight. At those pressures, the FAST rear suspension balanced itself really well between efficiency and smoothness and the Reba tried hard to play well with the Monarch (more on that later). Rebound was set one or two clicks towards the slow side.

Setup items aside, the bike is a beautiful work of art and I still can’t get past the fact that this full-carbon bike is only $3629. 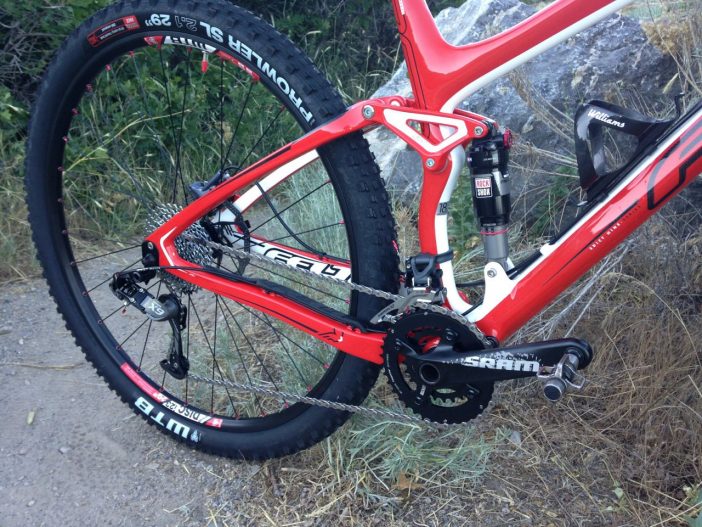 To test the capabilities of the Edict  Nine 3, I spun laps on my local test loops — testing technical climbing, descending, cornering, playfulness and overall feel. While a 100mm travel full-suspension 29er can get overmatched in extreme terrain, the Nine 3 never flinched and always came out victorious.

On flat, smooth singletrack, the Edict feels really fast and responds when pushed hard. Despite the extra weight of this bike, acceleration is always there. I felt the frame tracked well and the steering was perhaps too precise, but predictable. Others have noted that the head angle is a relatively-steep 71.5 degrees. I only noticed this come into play on technical ascents where oversteer happened on occasion.

On long ascents, the Edict simply kept on going. Yeah, I wished for 5 fewer pounds, but this bike climbed as fast or faster than bikes costing twice as much and weighing several pounds lighter. The FAST suspension design maintains efficient traction while seated or standing and translates that into forward motion. 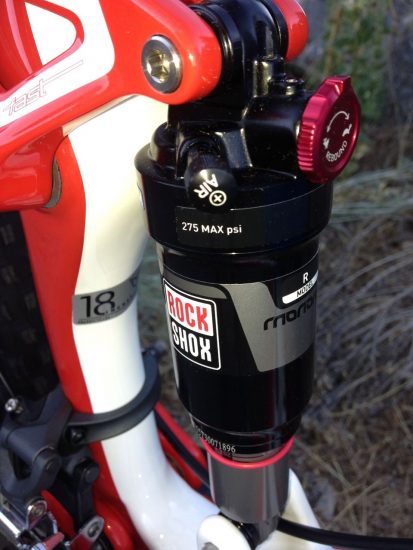 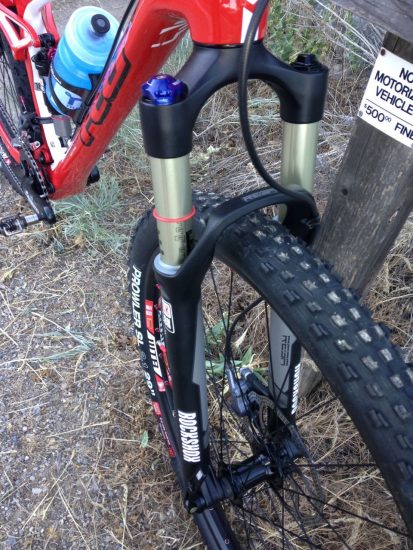 On the downhill, the rear suspension and fork showed their lack of refinement with the fork being oversprung and the rear being less sensitive to small chatter. That said, however, those attributes didn’t stop me from nabbing PR’s on several descents. Once I got the Reba dialed, it blew through the travel and made for as comfortable of a ride as I could get. A stiffer fork with more sophistocated dampening would certainly be a huge improvement on this bike — maybe even a 120mm fork.

The majority of the quibbles I have with the 2013 Edict Nine 3 are now resolved with the latest 2014 model. Here they are:

With the excellent performance of the 2013 model in my tests, the much-improved 2014 Nine 3 will be easy to recommend.

The Edict Nine 3 has been a quality player from day one. As Felt’s first foray into full-suss 29ers, this one is a solid winner. The bulk of my quibbles are now resolved in the 2014 model (and a $30 price drop), so look for the 2014 Nine 3 to be one of the best budget racers on the market.