Eurobike awards are handed out to the best-of-the-best, sir. The GT Sensor now joins some quality bicycles heading into 2014. The winner is the all-new 27.5 Sensor Team.

The all-new Sensor features 130mm of travel via Angle Optimized Suspension and Path Link suspension design and is available in carbon or aluminum frames in a variety of builds. This one, however, is the Sensor Team with a solid build kit, but oddly sporting a 3×10 drivetrain. They must be expecting riders to encounter beyond category climbs. Regardless, this new platform looks solid and takes its place among the elite after this year’s Eurobike. 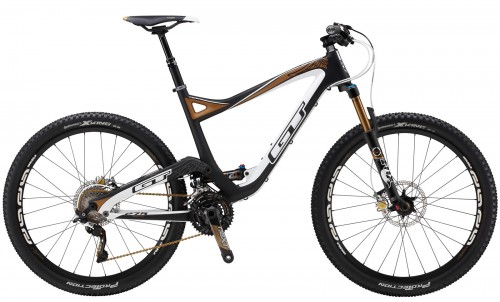 The Eurobike Award has been a fixture at the Eurobike show since 2005. All manufactures from the cycling industry we’re encouraged to submit entries in which a total of 496 bicycles we’re submitted in several categories. In the end the GT Sensor Team was a recipient of the Eurobike Award in the Mountain Bike category.

“The Sensor has been in development for the past couple of years and we introduced this bike to the media in June” stated Tim Inall, general manager for GT. “All reviews have been extremely positive and the bike has gained a tremendous amount of excitement heading into Eurobike. Receiving the prestigious Eurobike Award against some of the best full suspension mountain bikes in the world is the highest level of validation in the cycling industry”.