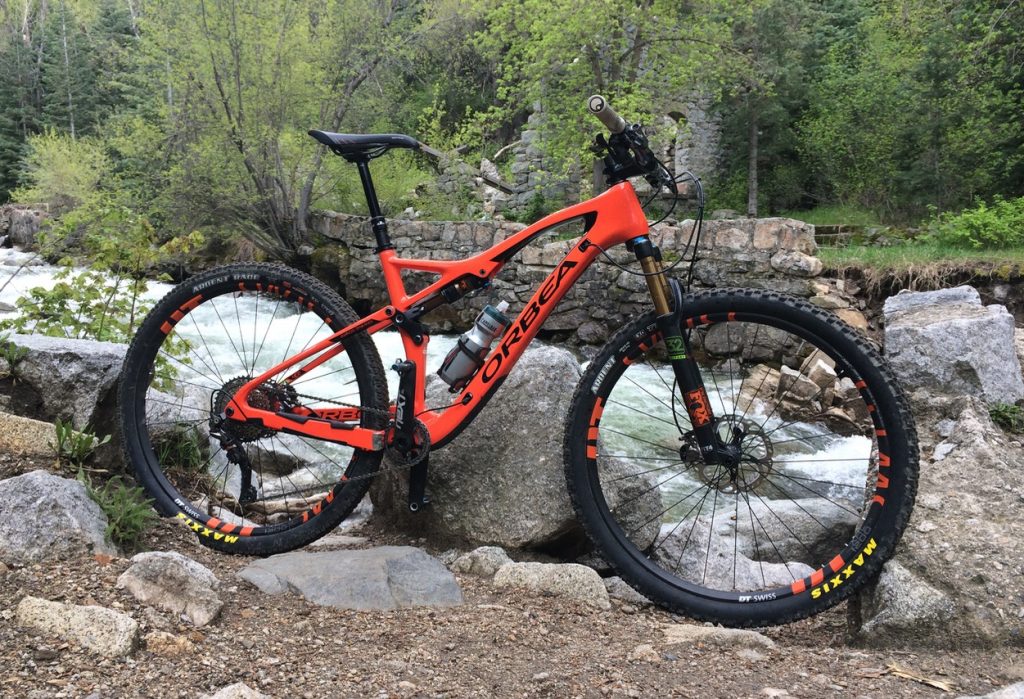 This year, Orbea celebrates their 175th anniversary as a company. What started as a firearms company transitioned to bicycles in the 1930’s. Still, that makes them one of the oldest bicycle manufacturers in existence. To celebrate, Orbea is highlighting their heritage and launching awesome new bikes, like the Occam TR that I’ve been riding all spring.

When Orbea redesigned the Occam, they chose to do it in both 29er and 27.5″ variants — the Occam TR and Occam AM, respectively. Both are built around the latest BOOST axle widths for extra stiffness and both feature Orbea’s OMR carbon framesets and both are intended to fight in the ultra-competitive (and sometimes blurry) enduro/trail/all-mountain category.

Being a 29er aficionado, I opted for the Occam TR and have been testing the top-shelf M-LTD build. With 120mm travel front and rear, the Occam TR has some solid company in both the Specialized Camber and Trek Fuel EX. That said, it does seem like the pure 120/120 bike is getting harder to find as many have grown longer legs and/or moved to 130/140mm forks.

With a Fox Float DPS Factory rear shock and a Fox 32 Float Factory fork, it has all the latest and greatest that Fox has to offer. Initially, it took quite a few rides to dial in the suspension to my liking — you know, that perfect balance between small bump absorption and taking large hits with a smooth, progressive stroke. It’s something that’s difficult for any bike to achieve.

To get that “just right” suspension feel, I’ve opted for a little more sag than recommended. I’m told the target is 30%, but I’m finding it rides best just a little over that. But, it’s a fine line because the tune on this shock and the suspension kinematics are very linear with no real ramp-up. Too little pressure and you’ll blow right through it with a harsh bottom-out (yeah, I may have done that a couple of times). In the end, I’ve been satisfied at about 35-40% shock sag (130 psi  for my 170 lb. weight) and running it in Trail 3 mode.

Once dialed, the Fox 32 Float does an admirable job , but I longed for a little more stout platform like the Fox 34 or Rock RockShox PIKE for added stiffness and a smoother ride. That said, I was able to get it set up to my liking — again with a little more sag than recommended (70 psi for my 170 lb. weight) and also in Trail mode with minimal threshold.

When it comes time to get out and play, the Occam TR is a willing partner. The M-LTD build is relatively light at 25.4 lbs., so it feels responsive and does get up and go without too much effort. The rear suspension lacks a pivot, but instead relies on flexing seat stays to optimize the squish (Orbea calls it UFO). This is a common design and it does a great job dropping weight while maximizing rear wheel stiffness in concert with the 148mm axle spacing. If I could point to the single most awesome thing about this bike it is certainly the rear axle stiffness as it simply doesn’t flex and tracks better than any bike I’ve ridden. Yeah, it’s another “standard”, but this one is a keeper.

I applaud the 1x drivetrain employed here and this is the first time I’ve had extensive miles on Shimano’s 1x offering. With XTR shifters and derailleur, XT 11-42t cassette and RaceFace Next SL 28t cranks, the entire drivetrain has a ton of potential, but the system simply doesn’t match the crisp shifting of SRAM XX1 or X01 kits. It’s reliable and consistent, but just not as fast, precise or as ergonomic as the competition.

Also, while the XTR Trail brakes do offer good stopping power and modulation, they are bested by the SRAM Guide RSC’s in my opinion. Curiously, the rear brake lever would tend to change engagement points with use. When I started the ride, the lever would compress further inward, but over the course of the downhill, the engagement point would be reduced — as if the fluid needed priming.

I’ve got to mention the DT Swiss XRC-1200 wheelset because it has taken quite a bit of abuse and they still look and ride like new. They spin up quickly and roll well with some of the most reliable and trusted hubs on the planet. It is interesting to find aero spokes employed, but in spite of several rock strikes, the entire wheelset still looks new. They are also tubeless-ready, though I’ve run them tubed so far. With a 21.5mm inner width, they aren’t wide by today’s standard, but they are a decent width and are respectably light at 1425 grams/set. This really is a fantastic wheelset.

The TR rewards the aggressive rider

As with other 120mm travel 29ers, the Occam TR is built for all-around trail duty and does a great job of masquerading as a near-enduro and almost-XC machine. As my fitness level has improved throughout the spring, I’ve arrived at a greater appreciation of all that the Occam TR has to offer. Initially, I thought that it felt a bit sluggish on the climbs, but now that the season is in full-swing, I’m proving that not to be the case — I’ve nabbed several PR’s or near-PR’s and crushed a rolling KOM.

Certainly, getting the suspension dialed in has helped, but getting out of the ultra-small 28/42t combination has helped dramatically. At this point, I’m rarely using that combination — only for extreme bailout situations. Bailouts aside, the 28t front chainring is simply too small. I’d prefer a 32, but even a 30 would be a significant improvement as I’m spinning out on fast fire roads and don’t even think about pedaling fast on pavement — you’ll top out in a jiffy.

As a pure climber, the Occam TR holds its own — no it’s not as fast as an XC racer, but it doesn’t concede much in that regard. But, where it does shine is on rocky, technical climbs as it stays planted and can ride through or over just about any obstacle. On one long, rock-strewn climb I was able to maneuver the bike up and over wet granite slabs and between rocks with ease. Everything felt natural, smooth and balanced without any front-end wander. I also found it easy to shift to the nose of the Fizik Gobi saddle and keep the front end down on all sorts of climbs.

On 29ers, it’s important to keep the bars as low as possible. I removed all the spacers from under the included RaceFace Turbine 35mm stem and reversed it to get as low as possible. That bar/stem combo felt good, but I longed for more width. So, I loaded it up with Niner Flat Top RDO 780mm bars and a 70mm Trail stem. Making that change delivered extra control and precision in spades. Yeah, it made for tight handling through the local scrub oak, but I think I’ve found the perfect width for this bike.

On twisty, turny descents, the Occam TR is an absolute gas. Dropping the saddle and rolling through fast, swervy trails is a ton of fun. Again, just like the uphill, this bike rewards the aggressive descender so stay on it. When angulated properly, it simply hooks up and pops out of corners with a ton of speed. And, it gobbles rock gardens, chunder and drops quite well for a 120mm travel bike. This really is a fun bike at speed and feels completely comfortable. Certainly, you could get it in over its head, but I couldn’t find a descent it wasn’t able to handle with style.

I will mention that I did have trouble finding the balance point to manual over drops and rocks. It has short stays for this category at 435mm, so I’m not sure what’s going on. Perhaps over time I’ll find it more reliably, but it has made for some awkward take-offs and landings, but luckily without incident since the Occam is quite forgiving of rider error.

Once the honeymoon was over, the Occam TR M-LTD became more and more likable as the miles passed. I came to appreciate just how well the TR can climb and loved how fun it was to snake down winding singletrack. The full build is lightweight and as top-shelf as you can get, but I’d still prefer an XX1 kit.

My appreciate for the Occam TR M-LTD grew over time. As my fitness level improved, this bike began to come into its own -- both on the uphill and the downhill. It is an extremely-capable and fun trail bike, but you need to ride it hard to truly appreciate it. Get a bigger chainring and you're all set.