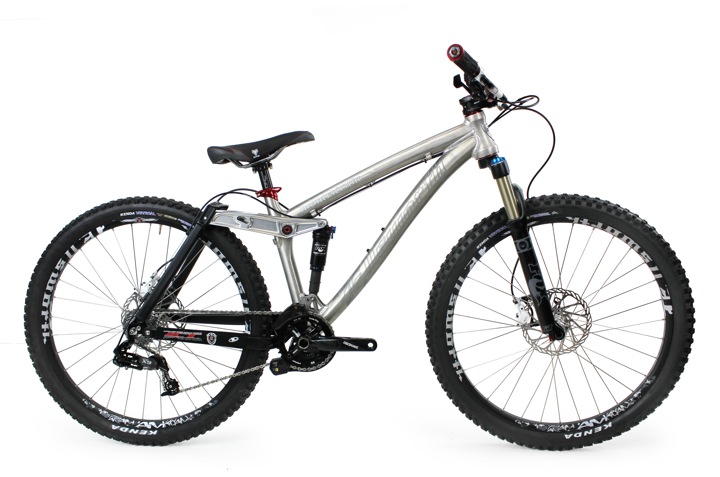 While I’m not physically attending Interbike this year, I’ll continue to report on as much new and cool stuff as I see it. My friends at Ellsworth are unveiling some great new changes for 2011 across their entire lineup. The biggest change will be in the new SST tubing, which uses shapes and tapers instead of hydro-forming. These new tubes will now feature tapered head tubes, new trick color options for rockers and other bits as well as more standard color options across the line (hallelujah!). I’ll be the first to admit that the funky nebula anodized colors are not my favorite and hopefully we’ll see more standard colors from Ellsworth going forward.

It only gets a quick mention in this release, but the new Evolution 120mm 29er looks to be quite the trail slayer. I love the Evolve 29er, but a bit more travel, new tubesets and a tapered head tube will make it that much better. Read on for a glimpse into Ellsworth for 2011.

Ellsworth’s new Momentum is the company’s first Slope Style bike – perfect for the Park or 4X. With the pedal efficiency of Ellsworth’s patented ICT suspension, the bike is fast like a hard tail, yet takes the edge off the hits with 120 mm of firm, speed tuned rear travel allowing the bike to carry more speed and stay connected. It’s the perfect ICT embodiment in a full suspension Park style bike. The Momentum will be customizable, offered with several build options, and will feature a custom configured Fox 831 fork and Ellsworth’s custom built All-Mountain wheels. 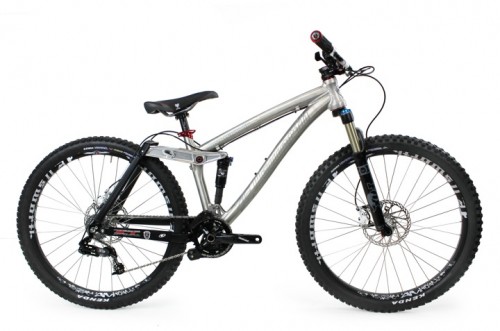 Crafted from Ellsworth’s Rare Earth Carbon, the Enlightenment 26 crossover bike features force directional carbon shaping and lay patterns topped off with internal cable routing to protect the shifting from the elements. The DMS (Dual Mono Stay) firmtail frame design features an element of absorption, without mechanical articulation, that produces an amazing ride whether it’s a quick daily commute or an off-road trek on a favorite trail. The Enlightenment’s unique dropout design accommodates the NuVinci N360’s drive with a belt or a chain. The NuVinci CVP is a significant “shift” in drivetrain technology, transmitting mechanical power with spheres instead of gears. With an unlimited number of ratios available within its nominal 360% ratio range, the N360 enhances the Enlightenment’s performance with seamless, continuous shifting (even under high pedal torque), without power interruptions, missed gears or dropped chains.

Ellsworth’s XC, Trail and All Mountain mainstays (Truth, Evolve, Epiphany and Moment) will feature the next generation of the company’s SST tubing (sst.2), which is hand-shaped after swaging and tapering, which gives precise control of wall thickness, over bulk hydro-forming. The shaping allows Ellsworth to create the precise characteristics of life and rigidity in each frame. In addition to new frame graphics and head badges, each frame will feature a new semi-integrated tapered head tube that provides superlative strength for razor sharp handling and increased front-end stiffness, improved overall stack height and allows for an increased bearing surface. In addition, Ellsworth is incorporating a new Pivot Integrated Seat Tube for each model. New super-formed seat tubes are lighter and stronger than ever.

“Our 20th anniversary lineup continues the handcrafted, quality and technological ‘Made in America’ tradition of excellence that our customers have known and loved for two decades,” said Tony Ellsworth. “This is perhaps the most exciting model year lineup we have ever produced. Our mountain bikes maintain our tried and true ICT suspension design that provides greater efficiency — for climbing, speed and acceleration; ride quality — incredible handling, traction and control; and reduced rider fatigue — for sustained physical performance. Whether on or off road, our customers riding experience remains paramount to this company. That’s why we’d like to thank our customers for the ‘great ride’ over the past 20 years with a model lineup that pays homage to the past but propels us to the future.”

For more information on the Momentum, Evolution, Enlightenment 26 and other 20th anniversary models, contact Ellsworth Handcrafted Bikes at 760-788-7500 or visit www.ellsworthbikes.com. Ellsworth will preview its 20th anniversary lineup at Outdoor Demo West in Boulder City, NV September 20-21 (Booth 2070) and at the Interbike Expo, September 22-24 in Las Vegas (Booth #4575).